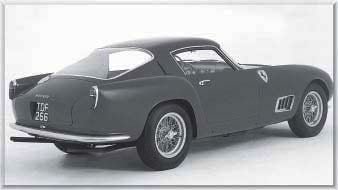 Twenty-six-year-old Luigi Taramazzo’s first success with S/N 0911 GT (one of the most famous and successful of all Ferrari racing cars) came shortly after taking delivery in 1958. He brought it home second in class and sixth overall at the Coppa delia Consuma, behind the more experienced Eduardo Lualdi, also driving a 250 GT TdF. Three weeks later, he was the overall winner of the 1958 Mille Miglia, with co-driver Gerino Gerini. (The last true open-road Mille Miglia was held in 1957. The 1958 event was modeled after the Tour de France, with wheel-to-wheel competition on closed circuits.) The duo were consistent leaders from the event start and captured first place overall by 1 hour and 25 minutes, beating the team of Villotti/Zampiero, who were also driving a 250 GT.

Taramazzo continued his string of successes with 0911 GT following the Mille Miglia against intense competition in Italian national championship races. Taramazzo and 0911 GT captured the class win in the important Trentio-Bondone hill climb on July 13, where he finished seventh overall. Only a week later Taramazzo and 0911 GT won overall at the Garessio-San Bernardo.

The prestigious and important Coppa Intereuropa, a one-hour timed event, was held at Monza on September 7, the weekend of the Italian GP. On the demanding 4.65-mile Grand Prix course in a race that drew the finest competitors in Italy, Taramazzo brought 0911 GT home first overall and of course, first in GT class. With an average of 107.2 mph, he was only 13.8 mph off the GT-winning speed of Tony Brooks’s Van Wall Grand Prix car.

In the Fontedecimo-Giovi hill climb on September 28, Taramazzo and 0911 captured second overall and first in GT. At the Coppa San Ambrocus at Monza, in another contest with his rival Lualdi, Taramazzo came home second overall and in GT. With this podium finish, he garnered enough points to be crowned the Italian National GT champion—one of the most coveted titles in Europe—after a closely contested season.

Taramazzo would race once more in 0911 GT before trading the car back to Ferrari. The list of subsequent owners of 0911 GT is extensive until it found a long-term home with author and Ferrari historian John Starkey in the UK in 1980.

In brilliantly restored condition, and with an unmatched provenance, 0911 GT must be considered one of the most important vintage Ferraris extant.

The 250 GT put Ferrari on the map as the best, fastest and most consistent of the GT racers of its day. Winning the grueling Tour de France in both 1956 and 1957 earned it the popular name of 250 “TdF.”

In theory, the 250 TdF was available to anyone with the ability to write a check to the local Ferrari dealer for $12,000. In fact, the very best cars, with the latest camshafts, pistons and lightweight parts were reserved for the best-known and most talented drivers. Even so, a “mildly tuned” 250 TdF was more than adequate to quickly run away from virtually any competitor of its time, including Corvettes, 300SLs and Jaguar XK 140s.

This car had been crashed and repaired during its arduous competition life, and the shape of the front body is certainly open to some questions as to how true it is to the original shape. Nonetheless, its eyeball appeal, superb provenance and first–rate presentation by the auction company helped propel the sale price past expectations.

S/N 0911 GT, consigned by a long-time SCM subscriber, was well known to the dealer/broker crowd in attendance at the DoubleTree Hotel. They knew it had been bought just a year ago for less than $1 million. Its 30% jump in value brought a collective gasp from those same dealers and brokers, who thought the market for high-end Ferraris might be softening.

The turmoil in the global economy that resulted from the terrorist attacks on America has not begun to settle. Whether money will flow from stocks into cars, and whether high-end cars will suffer as those who play in that market turn their attention to other things, is yet to be determined. What is clear, however, is that whichever way the market goes, superb cars with documented histories, like this one, will always command a premium when put in front of the right audience