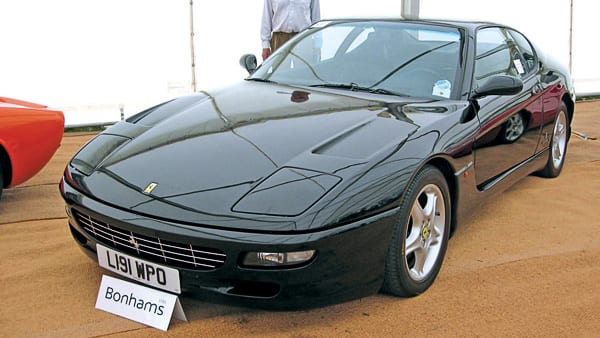 Modern four-seat Ferraris are user-friendly, entry-level supercars. You might compromise on the number of seats, but not on performance. Last month I reviewed Ferraris with more seats than doors, starting with the 250 GTE and going through the 412. This month, we’ll take you from the 456 to the current 612.

456 GT
The 456 GT was launched at the FF40 International Ferrari Celebrations held in Brussels and Spa Francorchamps in September 1992. Although designed as a world car, because of U.S. emissions and safety regulations, the 456 didn’t make it to North America until the summer of 1994, where it debuted at Monterey when Ferrari was the featured marque at the Historics.

Originally billed as a replacement for the 365 GTB/4 Daytona, the 456 really replaced the 365 GTC/4. The new 456 GT combined the looks and performance of a two-seat Berlinetta with seating for four.

The Pininfarina body hinted at the Daytona. The cockpit featured Connolly leather, adjustable seats, easy-to-read gauges, and innovative door windows that lowered when the doors were opened. The air conditioning and heating were world-class, and while the 456 may lack the wonderful exhaust sound of the C/4, its quiet cockpit will make a 200-mile drive to your vacation home a pleasant experience.

There was no 1996 U.S. model because of warranty problems, including door window sealing, cracking windshields, malfunctioning seat belt retractors and seats adjusters, myriad ECU problems, and Ferrari’s rush to develop an automatic transaxle for the next year’s 456 GTA.

456 M
The updated 456 M, or “Modificato,” was launched in March 1998 at the Geneva Salon. It featured a larger, more aggressive egg crate grille with a pair of extra driving lights and a more pointed hood—now carbon fiber. The cockpit had improved seats and a new dash. The 456 M GTA added twin Bosch Motronic M5.2 engine management programs, integrated with the automatic transaxle. Production of the 456 ended in 2004 with 1,548 456 GTs and 403 GTAs, while 640 6-speed 456 Ms and 631 456 M automatics were built.

Living with a 456
The 456 GT and 456 M are user-friendly. Power is seamless and the front seats comfortable, while the rear is tolerable for short people on short drives. Clutches, traditionally a weak spot in Ferraris, are good for 15,000–20,000 miles. Cam and front seals tend to start leaking after about 10,000 miles, so most owners skip the 15,000-mile service and go straight to the 30,000-mile service, which includes cam seals, cam belts, tensioner bearings, adjusting the mechanical valves, degreeing the cams, and more, at a starting cost of about $5,000.

Door windows on early cars had seal problems, and when new were a $5,000 fix, fortunately covered under warranty. Virtually all early cars have been repaired, and for those few that have not, a skilled shop can handle the job but expect to spend $5,000 or more.

While the automatic is sluggish in the GT, it’s better integrated in the 456 M automatic, and the 6-speed gives both the 456 GT and 456 M supercar performance. A pre-purchase inspection is mandatory, and it is not uncommon to do a compression and leak-down check on a low-mileage 456 and find major problems with poor ring seating and/or leaky valve seats. If the compression on a car is weak, keep looking, as it’s a $15,000-plus, engine-out, heads-off fix. Because of the large windows, the sun can cook the dash and seats. While the leather interior is both spacious and luxurious, there’s so much of it that replacement is expensive.

612
The 612 Scaglietti continues Ferrari’s tradition of building the most exotic 2+2 on the planet. The all-new 612 was engineered with aluminum supplier Alcoa around an alloy semi-spaceframe similar in concept to the 360. It employs extruded main frame rails connected by cast modules and reinforced with sheet stampings. The frame and body are built using self-piercing rivets and MIG (metal-inert-gas) welding so no structural adhesives are used. The all-aluminum construction is a first for a V12 Ferrari, and just as weight is down, torsional rigidity is up by over 50%. At about 4,100 pounds, the 612 is no lightweight, but it is far more spacious and also about 130 lbs. lighter than the 456 M, and about 600 lbs lighter than the Bentley Continental GT.

Powered by an evolution of the 575 M Maranello V12, the 5,748-cc engine uses a state-of-the-art Bosch ME7 controller with four knock sensors, so the compression ratio can be tweaked up to 11.2:1, while the long nose allows a longer, lower-restriction intake that improves airflow to the engine, giving 533 hp and 434 ft-lbs of torque. The 612 is the first Ferrari 2+2 with F1 paddle shifting, yielding 0–60 mph in 4.2 seconds en route to a politically correct 199-mph top speed. The 612’s V12 is mounted in a front-mid-engine position, with a 46/54 front/rear weight balance (as opposed to the 456 M’s 57/43), and 85% of the 612’s weight is between the axles. The car stretches over 16 feet, with a wheelbase longer than a Chevrolet Tahoe.

The 612 is the largest Ferrari ever, an ultra-high performance 2+2 with room for four adults that will smoke a Bentley Continental or Aston Martin Vanquish on a winding road. New prices start at $265,000, and one suspects that $200,000 buys the car while $65,000 subsidizes the Ferrari F1 team.

The 612 is easily six seconds a lap faster than the 456 M around Ferrari’s Fiorano test track, and the optional ceramic brakes are a part of that. But by the time you need ceramic brakes, you’ll be so far over American speed limits that any mistakes will be big ones.

U.S. delivery started in late 2004. Many were sold to ultra-wealthy enthusiasts eager to garner the friendship of their local Ferrari dealer as a way to secure a place in line for the upcoming two-seat 599.

The 612 has proven to be a delight for those who can afford the ultimate 2+2. Production has slowed somewhat due to focus on the new 599, so most 612s now go to buyers willing to wait for delivery. Thanks to a booming world economy, staggering performance, and owner-friendly design, the 612 has sold far better than the 456.

While few 612s have much mileage, expect to replace the brakes and tires at 10,000 miles. The latest generation F1 gearbox is so good that only one in ten 612s are being delivered with a 6-speed. Unfortunately a great racing gearbox involves a compromise in traffic, and the combination of weight, power, and performance means that the F1 clutch will need an $8,000 replacement at about 10,000 miles. Like all modern supercars, depreciation hits hard, with $60,000–$100,000 in the first year.

On the collectibility side, no 2+2s have ever skyrocketed the way their two-seat stablemates have, and neither the 456 nor the 612 are likely to become collectibles. They are simply daily-driver Ferraris, and like an exclusive Swiss watch, are bought as much for the statement they make as for the performance they offer.