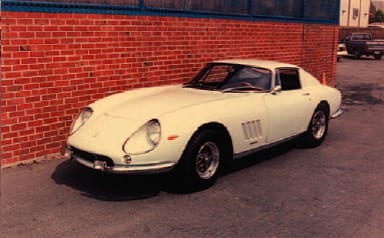 Just as we get used to the toll taken by the passage of years, from carrying reading glasses to keeping a bottle of Advil by the bedside, owners of older Ferraris have grown accustomed to the idiosyncrasies and weaknesses of their cars. To these long-term owners, the Ferrari they have owned for many years is a great car, starts right up, and doesn’t leak much oil.

Chances are, however, that they have put fewer and fewer miles on their car as time has passed. Often when someone decides to part with a prized Ferrari, it may not have been started or driven for months or years. And just as likely, chances are the new owner, excited by his new toy, wants to start driving it as often as he can.

And that’s where the problems can start.

Ferraris, like all cars, age. Anyone buying a 1972 Chevy Impala expects a worn suspension, soft shocks, minor engine leaks, a clunking differential, and air conditioning long overdue for a recharge. But for the $2,500 the car will cost, you’ve got pretty decent basic transportation that may go another 50,000 miles before it needs serious attention.

Someone buying a 1972 Dino will be spending well over $65,000, yet their “new/used” car will have the same inherent age-related problems as our hypothetical Chevy Impala does. But there’s a major difference. For $250, you can probably buy the parts and magic “overhaul in a can” potions that will keep your Impala on the road nearly forever. The repairs to the Ferrari can cost enough to cause a quick trip to the home equity loan broker.

Virtually every unrestored Ferrari over 20 years old needs a variety of simple maintenance activities performed, in addition to the typical tuneup, brake pad replacement and so on. Shock absorber seals, suspension bushings, brake hoses and water hoses are made of rubber or rubber related components, and rubber deteriorates with age. Water pumps tend to start leaking as well, and engines often need to be pulled and resealed to stop the inevitable oil leaks.

Also, common sense and driver preservation dictate that safety related items (such as deteriorated brake lines or frozen shocks or brake calipers) be repaired before the car is used.

For instance, I recently sold a verified one-owner, red with tan, US model 246 GTS with only 38,750 original miles. This Dino had seen very little use during the past decade, had great panel fits and paint, and ran well. Upon detailed inspection, the list of needed repairs was long and included radiator and heater hoses that were as hard as hockey pucks. It would cost $2,000 to replace them as the radiator and the heaters are in the front and the engine in the rear, so the hoses run through the center of the car. Also needing work were flaccid front shocks ($1,000); a radiator long overdue for a recore ($800); radiator fans that desperately needed to be rebuilt ($600); a cracked headlight switch ($1,000 if you can find one, or have one built out of used parts); an abused first gear synchro ($4,500); an inoperable horn ($300); dragging front brakes ($1,000); a master cylinder that had lost one of its two circuits ($2,000); multiple engine leaks ($7,500); rusted-through header heat shields (included in the engine-out reseal); inoperative air conditioning ($1,000); warped door panels ($1,500) and a minor rip in the driver seat ($2,500 you have to do both seats so all the panels match). The initial estimate to do all the above was well over $20,000.

And this was a very nice car.

Then there was the “while you’re at it” (and it’s already apart) wish list, which included replacing the clutch, powder-coating the suspension, re-plating the calipers, a major service and a rebuild of the heating and cooling system. This easily adds another $10,000 to the repair estimate, and suddenly our straight, non-rusted, no-bad-stories, one-owner Dino seems like a potential parts car.

Fortunately, the buyer owned many other Ferraris and accepted that the majority of the problems were common to most 30-year-old Ferraris. After the usual negotiations a compromise was reached, an equitable split for repairs was made; a purchase agreement was signed and payment was made. The seller felt like he got a fair price given the things the car needed, and the buyer felt like the reduction he received allowed him to have some money to apply towards the repairs immediately necessary to get the car back on the road, and for it to perform reliably.

All of the above simply reinforces why I am a relentless advocate of thorough pre-purchase inspections as a part of any used Ferrari acquisition. And the older the Ferrari, the greater the need for a complete going-over.

None of the age-related problems above should be deal-killers, just realistic assessments of the condition of a car and the possible costs of getting it truly roadworthy. However, pre-purchase inspections may turn up real deal-killers, including major crash damage that has been repaired poorly, bent frames that have been repaired badly, or a sick engine that needs a mandatory rebuild. And unless you’re buying something for parts, no old serial-production Ferrari with those kinds of issues is worth having.

After an inspection, I usually recommend to the seller and the buyer that they reach a percentage split agreement on the estimated cost of repairs. Split agreements work well because the buyers aren’t nearly as eager to have every aging part on the car replaced if they are paying part of the bill.

I have found that the two key elements to a successful purchase are first, a pre-purchase inspection that tells you exactly what you are dealing with, and second, the understanding on the buyer’s part that these are just used cars, and like all used cars, will have things that will need to be dealt with when they arrive in your garage. Expect your used Dino to act like a Lexus and you’ll be disappointed. Expect it to need an infusion of love, affection and a few dollars to start behaving itself, and you’ll be rewarded with a terrific ride.