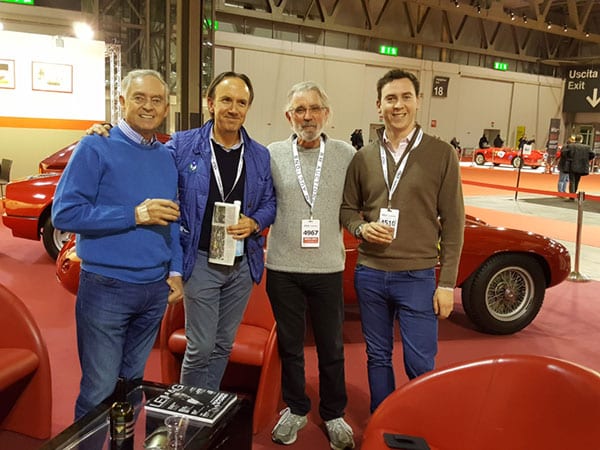 A little background
Our story begins with Luigi Compiano the heir to an Italian dynasty called “North East Services” that operated a fleet of armored trucks used to transport cash, gold and other valuables around Italy. Compiano had inherited his family’s private security companies in 2010, with hundreds of employees and dozens of trucks, giving him access to millions of €uros of what is politely called “other people’s money”. In a brazen Ponzi scheme that would have impressed Bernie Madoff, Campiano used “other people’s“ bank and VAT funds held in trust to buy an astounding collection of villas and holiday homes, 420 plus cars, 150 plus motorcycles, 140 odd bicycles, 50 plus boats and racing hydrofoils, bobsleds and rooms full of automobilia. Fortified with pockets full of cash, Campiano was well known to the classic car dealer network, traveling from his base in Treviso to Modena and Milan to buy multiple cars, or boats, or bikes, in cash, every week. While all serious collections have a theme or continuity, Compiano’s collection consisted of what-I-bought-today including 34 Alfa Romeos; 45 Ferraris; 62 Jags; 31 Lancias; 23 Maseratis; 68 Porsches and much, much more

The party ended in December of 2013 when the Guardia di Finanza (Italian Financial police) confiscated the collection for tax evasion and VAT fraud. While the complex case drags through the courts and the dynasty that was “North East Services” is no more, various reports state there was 20m €uro plus missing from the company’s vaults.

The road to the auction
To get the rights to the auction RM Sotheby’s had to give a guarantee to the Guardia di Finanza that was rumored to be in the 15M €uro range. The massive collection had been stored by the Guardia di Finanza in 11 warehouses near Treviso and required 100 transporters to transport them to Milano for the auction. RM Sotheby’s global team of 9 people from 4 countries spent 21 days to identify, document, photograph and catalogue the collection then printed and mailed out thousands of catalogues in only 10 weeks. When the collection was finally assembled in Fiero Milano, it covered 200,000 square feet – the equivalent of 4 football fields with 817 lots in total on offer. In a brilliant marketing move, RM timed the auction to coincide with the massive Milano AutoClassica Classic & Sports Car Show, which normally draws 10,000 visitors and is Italy’s version of France’s Retromobile and Germany’s Techno-Classica. Listed as Duemila Ruote (which means two thousand wheels), the RM Sotheby’s event represented the largest automotive-themed auction ever held in Europe.

The preview and registration
On Thursday I was at the auction preview to inspect 18 different cars for 7 different clients, but with 400 plus cars spread over 4 football fields, at let’s say 5 minutes per car to make notes and take photos, one would need 3 plus long working days to perform a brief inspection of every car. I quickly walked the rows, inspected, made notes and photographed only the cars clients wanted me to bid on, which took three hours, before heading for registration. RM Sotheby’s registered more than 5,000 bidders for the event, resulting in long lines and multi-hour waiting times at the registration desk—something I have never seen before. While the average RM auction draws about 1,000 bidders, the RM staff on site said there were 4,000 registered bidders in the room and another 1,000 registered internet and phone bidders from over 50 countries. Just over 80% were first-time clients to RM and 50% of those were Italians, plus bidders from Russia, Brazil, Turkey, the Middle East and Asia. With many “modern classics” on offer, about 50% of participants were under the age of 50.

Too good to be true
With 800 plus very diversified lots on offer; all at no reserve and many with absurdly low estimates; all as part of a single bankruptcy auction; thousands of over-eager buyers came from far and wide in the hopes of getting a bargain in this bankruptcy auction, but it was not to be. From Friday the 25th to Sunday the 27th a group of 5 multi-lingual auctioneers rotated on the auction block, giving an average of only two or three minutes time to each lot, over 30 very-fast-paced and grueling hours, to sell the 817 lots. In addition to the mass of bidders on the floor, there were a staggering 1,000 plus internet bidders, and some lots involved over 20 active telephone bidders. I’ve never seen this level of competitiveness or animal-energy at an auction.

As my wife noted, the energy level in the room was off-the-charts and many bidders were emotionally carried far from reality once the frenzied bidding started, blowing past their preset limits. Many also seemed to forget that there was a commission of 12% to be paid on top, plus 22% Italian VAT on the commission, making for a 14.4% commission. Additionally, EU residents had to pay the 22% Italian VAT, so the prices paid were actually much higher than indicated in many cases! Although RM Sotheby’s description in both Italian and English in the newspaper-style catalogue was very clear, many bidder’s egos exceeded their wallets, and many had temporary amnesia regarding the commissions and VAT that was due. Rather than a legal battle with those bidders, RM Sotheby’s made use of the fast pace and length of the auction to re-offer multiple cars later. Additionally several lots that were sold to online bidders were later re-offered.

The non-repeatable record results
It must be pointed out that these were a hoarder’s cars, not a carefully maintained and exercised collection. They had been bought, squirreled away in warehouses and parked with minimal attention for years. Most of the cars were in poor or very poor condition and many may have title issues, yet over the course of three days, before a packed house at the Fiero Milano, and thanks to a never-seen-before number of buyers, an incredible 51m €uro or $54.85m USD was hammer sold!

I was at the auction to bid on 18 cars for 7 different global clients, including the F40, the MC12 and the Lancia LC2. Each client was willing to bid to the high estimates or more, some much more, but we were absolutely blown out of the water on every bid. As Dutch dealer Paul Koot noted on Facebook, “Once I had my bidding number out of my pocket, the auctioneer was already at double the offer I wanted to make….” The only consolation was that it was a great chance to meet with the European dealer network, the bar was open and the espresso was flowing freely!

On a side note
While in Modena and Maranello for several days after the auction, several of the local shop owners mentioned that Luigi Compiano had been in their shop on Monday, so Campiano is certainly not in jail. Several Italian dealers explain that he has to go through three courts, one in his home town, then one for his region and then a third Federal court before he could be convicted so he was not going to be in jail any time soon.

But has the market changed?
With the bidder count up from the 1,000 or so at an “average” RM auction to a 5,000 bidders and 800 plus very diversified lots on offer; all at no reserve and many with absurdly low estimates, all feeding thousands of novice bidders, the sales prices defied market realities. Many of the bidders could have walked next door to the AutoClassica Show and bought identical but higher quality cars off the many dealers stands for substantially less! Every dealer I spoke with at the auction was amazed at the sheer size of the event and the energy in the room. All agreed they could never get anywhere near the same prices for the same cars, if they had identical cars in their showrooms. Auction expert Rick Carey summarized the sale best when he wrote “Duemila Ruote was not a market bellwether, it was market madness of a high order, an hysteria that spread through the largely inexperienced crowd like a virulent virus. It was a Black Swan.”