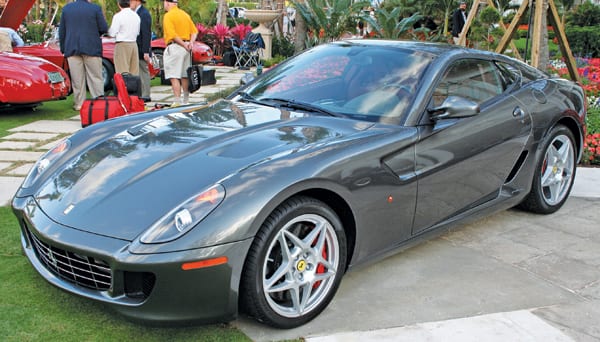 As one of the first 599s in the United States, this car was shown at the Cavallino Classic Concours d’Elegance, in Palm Beach, FL, in January 2007. The window sticker was a hefty $338k, but the economy and the Ferrari market were booming.

The car was sold to a Silicon Valley CEO for far over list at $565k. Alas, the Silicon Valley CEO was indicted soon afterward for financial malfeasance. Two trials later, he became the first U.S. CEO convicted of concealing back-dated stock options.

The current owner of the 599 contacted Taormina Imports by email and phone and was able to confirm they were a real business with valid contact info. An offer of $220k plus $5k for the luggage was made, the car was put through a pre-purchase inspection by a neutral shop and the 599 was soon with its second owner in Utah.

The pride (and price) of ownership
In April 2011, the second owner had his 599 serviced by the Ferrari dealer for Utah. It received an annual service, plus the HGTE handling package kit with stiffer springs and rear sway bar was installed. A new shock ECU was fitted, used HGTE five-spoke 20-inch modular wheels were located, the car was lowered and a skid plate was installed. Secondary cats were replaced with Fabspeed straight pipes to enhance the sound of the V12. Mirrors, exterior door handles and interior vent rings were treated to a carbon fiber overlay by MAcarbon. The total invoice was over $30k.

Only five months later, the thrill was gone, and the second owner offered the car on eBay with 2,100 miles. The owner included dozens of photos, the window sticker and a detailed list of the work done. One “buyer” asked for a scanned copy of the title. The car did not sell from the eBay ad.

Setting the trap
That “buyer” who wanted a scanned copy of the title turned out to be a very clever scam artist.

On May 13, 2012, someone claiming to be the Ferrari 599’s owner offered the car on Craigslist. The scammer used a credible email address that included the real owner’s name. No phone number was given, as the bogus seller was on an extended business trip and only available by email.

One of our long-term clients — a financial manager, sophisticated Ferrari buyer and former regional director of the Ferrari Club of America — inquired by email and received a knowledgeable reply. The scammer knew the auto jargon, and he had studied the eBay listings, collected photos and info. He offered a great car with heavy options at $170k, which was low enough to attract buyers — yet not so low as to scare off potential buyers.

The scammer also stated that any deal had to be done by email as he was in Tokyo for six weeks. Very clever.

The “Google Checkout Vehicle Purchase Plan”
On May 15, the scammer said the car had been left with a shipping company in Salt Lake City, UT. The guy set the trap and stated, “If you are interested, I want to use Google Checkout vehicle purchase protection program for payment and shipping process because they act like an escrow company and by using them we are both protected. In this way you will be able to inspect and test drive the car before I get paid and I’m sure you have the funds for the purchase.”

The scammer provided copies of the title and photos taken at his address listed on the title. He invited the buyer to contact the Ferrari dealer directly for info. Why did he do this? Well, the dealer would not have known about the sting!

The scammer also said that the shipper, where the car supposedly was, did not have a showroom, so no inspection was possible. This provided excellent cover for the claim that the Google Checkout plan would act as an escrow. “The money will be sent by wire transfer to a Google trust account managed by them. After the payment is confirmed and secured by Google, the car will be shipped to you. From the moment you receive it you will have 7 days to inspect and test drive it. After these 7 days you have to decide if you want to keep the car or not. If you’ll keep it, you will have to confirm with Google and the payment will be released to me. In case the car is not suitable for you for any reason and decide not to keep it, it will be shipped back on my cost and you will be fully refunded.”

The scammer asked for the buyer’s “full name, complete shipping address and phone number in order to register the transaction.”

On May 16, the buyer agreed and wrote back: “You are the kind of straight forward and honest person I would enjoy doing business with. Let’s go ahead with the purchase at $170,000.” The buyer asked for info on the Google Checkout terms and conditions, as it did not come up on an Internet search. The trap was set and ready to close.

Faked forms with five easy steps
One day later, the would-be buyer received an email form from “Google Checkout” on convincing Google letterhead with a transaction overview, a case ID number and an explanation on how “Google Checkout reduces the potential risk of fraud by acting as a trusted third party that collects, holds and disburses funds according to Buyer instructions.”

The email showed a photo and described the car, the terms, the price and five easy steps on how to proceed, and an explanation on how the buyer would be fully protected. Another fraudulent part of the clever trap was being set.

Fortunately, the buyer had gone to Google to search for info on the supposed Google protection plans — where he found out that the alleged seller’s claims of a “Google Protection Plan” was a fantasy. The real Google Checkout only handles credit cards — not wire transfers and not cars.

Further searches found examples from $2,500 Hondas to this $170k Ferrari 599 that had been offered with enough documentation to convince a few unfortunate buyers.

The bank account on the faked Google form belonged to a detail shop that had been offered a fee on any transaction. Because there had not been a payment, there was no fraud, and the banks would do nothing. Over the next week, the scammer made multiple inquiries in the hope that the buyer would wire the $170,000, but his mark luckily escaped the nightmare.

I’m continually amazed at how hard the crooks work at not working. There are two lessons to this story:

Second, if the seller doesn’t have an established reputation, can’t be found on a quick Internet search and will not allow a pre-purchase inspection by a (hopefully) neutral shop that can physically inspect the car, run away.