A Lifetime of Ferrari Madness 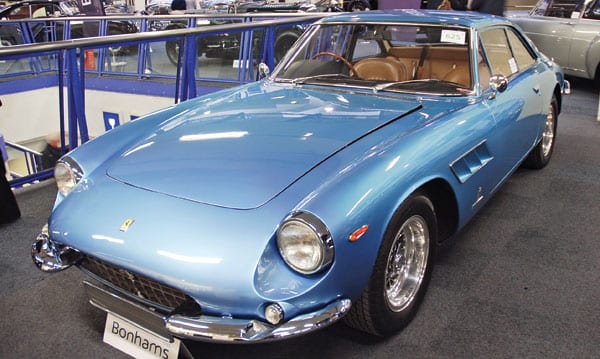 A Lifetime of Ferrari Madness

I met Keith Martin before there was an Alfa Romeo Newsletter and long before it morphed into today’s Sports Car Market magazine. This was far in the distant past, when Keith fought the uphill battle of owning an Alfa Romeo restoration shop. As fellow restoration shop owners and Italian exotic car brokers, we rejoiced in the booming 1980s and commiserated through the economic misery of the early 1990s.

In December 1993, as Sports Car Market started to grow, Keith asked me to write a Ferrari-based column. Now, 18 years and several hundred columns later, the column is always a work in progress and a research project. Each column is meant to explain the pleasures and perils of Ferrari ownership.

Just as Keith’s early history didn’t predict the ownership of a leading collector car magazine, my youth was far removed from the Ferrari world. Life started in Pembroke, a humble farming community in Ontario, Canada. In 1957, long before I had a choice, my parents headed for the big city of Vancouver, where my father became a reporter for the Vancouver Sun. I was encouraged to follow in his footsteps, majored in English and took typing courses at a time when only secretaries, reporters, writers and academics used typewriters.

Time to head south
I was in a car accident on the Trans-Canada highway on July 1, 1967, which put me in a body cast until February of 1968, which was a lifetime for a teenager. On a cold Canadian morning in February 1969, as the sun tried to break through and the early morning snow became a bitterly cold rain, Haight-Ashbury and warmer weather beckoned. In hours, I was again on the rain-swept Trans-Canada highway with $10 (Canadian) in my pocket, hitchhiking south. Over the next two years, I made multiple pilgrimages up and down the West Coast.

In 1970, I found myself in downtown San Francisco in need of parts for a 1955 Chevy, when I heard a new–to–me, and hopelessly exotic exhaust rumble from a parking area across the street. The driver was a caricature of a European movie director, wearing a blazer, a cravat and a beret. I crossed the street and fell in love with his car. It was dark blue, had four exhaust pipes, a crossed flag emblem on the trunk, and the chrome script read “Superfast.” I had just seen my first Ferrari, and I was hopelessly imprinted. (Decades and much research later, I found it was 500 Superfast, s/n 08253.)

Enzo Ferraris for less than $2,500
In 1971, while going to junior college in Orange County, CA, I opened a one-man body shop. Another local shop imported mechanical parts from wrecked 356 Porsches from Germany, using ex-German Post Office VW buses as packing crates that could be driven to the docks in Hamburg. I patched up and resold the buses to Southern California hippies. I did well and eventually moved up the food chain to Austin Healey, and, later, to Jaguar E-type sales and repairs.

In 1973, I bought my second Ferrari, Vignale 212 Cabriolet, s/n 0125EL, for $850. Now a two-Ferrari owner, I was, by default, in the Ferrari business. In 1973, I moved my shop to Costa Mesa, CA. We were just down the road from Road & Track magazine — and right in the center of Southern California car culture.

In 1974, I purchased Daytona prototype, s/n 12547, an ex-Le Mans, Daytona and Sebring racer, for $14k at a time when buying a used-up and stripped-out race car was masochistic madness. My lame rationale was that the outside fuel filler looked cool, and the roll bar would save me if I flipped it during a late-night run down Laguna Canyon Road.

Rationalizing racing
I began racing, starting with a 206 GT and then moving to Mazda Pro, then Barber Saab, to Trans-Am, IMSA GTO and eventually the Camel-Lite Series. My best — and last — season was 1993, with five podium finishes at Lime Rock, Mid-America, Watkins Glen, Portland and Phoenix. As part of our business strategy, we tracked down, bought, prepared and raced what were then long-lost race cars. In the days before the Internet, it was much easier to sell a race car that was well-researched, actively raced and could lead the pack.

Over the past 35 years, the Ferrari business has continually evolved, and those who survived have re-invented themselves every four or five years.

In the early 1970s, we fixed heavily crashed exotics for State Farm, USAA and Auto Club insurance. In the late 1970s, the boom to transform ratty Daytona Coupes into Daytona Spyder conversions was all the rage, and we gave many coupes a haircut. That market died as interest rates climbed past 20% in 1980.

In the mid-1980s the Japanese entered the market, and I was among the first to go to Japan, meet the wannabe collectors and write for a major Japanese magazine. Our sales to Japan jumped from zero to $50m a year in only five years — and then back to zero as the Japanese economy imploded in the early 1990s.

Ferrari madness in the 1980s
In the boom years, we could do nothing wrong and expanded, and in the bad years, we did nothing right, so we downsized. In any business, long-term survival means controlling costs while growing — and cutting costs when downsizing. Grow too fast and you go broke, downsize too slow and you die. Today, we have a 4,000-square-foot warehouse and show cars by appointment only. Thanks to the long reach of the Internet, we connect with an international clientele with all the advantages of being low-key, low overhead and local.

Driving the SCM soapbox
As a high-functioning obsessive-compulsive person, I insisted our staff track every Ferrari we bought, sold or were offered. We traded information with other anoraks and built up a database that has proven to be invaluable.

Having morphed from a restoration shop to heavy crash repairs to race car preparation and engine building, to sales and now brokering, I’ve been there, done that. I know it’s all up to having the best people in the best shop with the best work environment.

Today my kids are grown, and I’m too old for the babysitting required to run a large shop with all its personnel problems. My boutique situation suits me perfectly.

Thanks to Sports Car Market, I have my small soapbox. Once a month, I fire up my Hewlett Packard and expound on what 35 years of living the Ferrari life has taught me. Simply answering the phones and dealing with the dozens of daily “Dear Abby” e-mails supplies a never-ending list of new questions to be answered and challenging problems to be solved, column after column.

The next decade will be interesting, and I look forward to sharing them with you in the pages of SCM.