A Pilgrimage to Maranello – PART 1 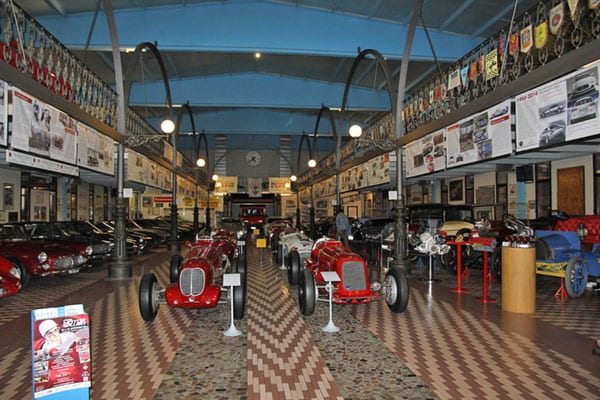 A Pilgrimage to Maranello – PART 1

As regular readers of this column know, we were at the RM Duemila Route auction at the Milano Trade Fair on 25–27 November to inspect; report back to our clients; bid on and hopefully purchase eighteen different cars for seven different clients. It was not to be.

I first made the pilgrimage to Italy and to Ferrari in the summer of 1972, when the Ferrari factory was the size of a modest American new-car dealership. Since then I’ve been back to Italy countless times to run in the Mille Miglia, the Coppa d′ Italia or to inspect and test drive race and rally cars for inventory, for our own collection or for clients. Indeed, this was the third trip to Italy to inspect various cars in just the last thirteen months.

The Monday after the auction we were on the Autostrada to Modena and Maranello for a two-day tour of the many local small shops. We stayed at the Maranello Palace hotel which is literally just behind the Ferrari Factory and within easy walking distance to the front gates of the Factory, the Ferrari Museum, the Ferrari store and the famed Ristorante Cavallino.

So many shops, so little time
Early Tuesday morning we were met by Guido Bortolani, a Lancia Rally car expert who was born, raised and still lives in Modena. As our guide for our two day tour we were off to our first stop at Toni Auto, literally a rock’s throw from the factory’s front gates. Toni Franco, the founder, served his apprenticeship at the Factory and then in the early 1950s at Garage Francorchamps in Brussels. While Toni is no longer with us, Toni’s son, Silvano, served his apprenticeship in the Factory’s racing department and runs the shop with the help of his sons Davide and Andrea, keeping the tradition alive, servicing Ferraris shipped in from all points in Europe. There are usually half a dozen cars, almost always Ferraris, in process. Like many Italian shops, Toni Auto works with the IPSIA Institute, a Factory supported apprenticeship program that offers training for both Italian and foreign automotive students.

Our second stop was at Franco Ferrari’s shop, Costrusioni Prototip, where they had two 250 SWB Berlinetta replicas well under construction, two more SWB frames under construction and a pair of 250 PF Cabs and a Ghibli spyder in for restoration. While not widely known, Franco Ferrari’s shop supplies major body sections or complete bodies and chassis to multiple different shops worldwide for repairs and 250 based replicas.

Our third stop was Carrozzeria Allegretti which had, in the 1970s up to the last decade, been the most prolific of the restoration shops and body builders. I had first visited Allegretti in 1972 as it was then on the “must see” list but with the death of the founder the company has slowly faded into oblivion. While the son, Stefano, was still there, the building was empty, the staff, the fabrication equipment and the clients had gone and Stefano was winding the remnants of the business down. I didn’t have the heart to photo Stefano or the inside of his now empty building!

Our fourth stop was AutoSport, now one of the larger shops in the Modena-Maranello area. Franco Bacchelli and Roberto Villa left Scaglietti in 1972 to form Carrozzeria Bacchelli & Villa. In 1976 they were given a contract with Ferrari for the repair of the fiberglass 308 GTBs and only a few years later they built the body prototypes for the 512 BBLM. In 1980 they changed their name to AutoSport and today they are a major subcontractor to Ferrari Classiche, doing repairs, major re-bodies, paint and all of the red wrinkle finish work for the factory. There are usually a dozen or so cars in process, including a few 250 based replicas. On a visit to AutoSport last year I’d had a long lunch with Franco Bacchelli and Roberto Villa who explained that their generation had now gone into retirement but in the last decade they had been able to hire and train a new generation of younger workers to carry on the tradition of body building.

The land of automotive soap operas
After the obligatory two hour lunch, we made a quick stop at the former De Tomaso factory. Both the Mangusta, by Ghia, and the Ford-era Panteras, by Vignale, were built in Turin. When the Ford-era (and Ford money) ended, De Tomaso used Italian government money (with the claim of keeping both jobs and a cultural/historic icon in the Modena area), moving into this facility on Via Virgilio on the outskirts of Modena. Ford had given De Tomaso the right to produce cars for the “rest of the world” market, so De Tomaso continued building the post-1974 Panteras, the Deuville, and Longchamp at this facility. De Tomaso went into liquidation in 2004, although production of a few new cars continued after this date. There have been several under-funded and ill-fated attempts to revive the De Tomaso name, most notably in 2009 when Gian Mario Rossignolo bought the De Tomaso trademark and formed De Tomaso Automobili SpA. The plan was to assemble chassis and bodies in Livorno and then paint and finish its cars in a former Pininfarina factory in Grugliasco. All did not end well and in 2012 Rossignolo was arrested for “misusing” 7,5m €uro of Italian government funds. I’m told that this location was funded by the Italian government but owned by De Tomaso, who sold it to the Rossignolo group, with De Tomaso {again} pocketing the funds. The building has been empty and essentially abandoned since 2008!

As the day wound down we stopped at the Panini Maserati collection. In a related and long running Italian bankruptcy soap opera, Maserati and its small museum had been sold, in 1968, to Citroen, but because of the 1971 oil price crisis and resultant 1973–75 recession Citroen went bankrupt and in August of 1975 Maserati was sold off to the above mentioned De Tomaso {thanks to funding from the Italian government}. The revived Maserati built the Kyalami, essentially a redesigned De Tomaso Longchamp powered by Maserati’s own 4.2-litre V8, and the all-too-forgettable Biturbo at the Maserati works in Modena. In May 1993, FIAT bought Maserati from the De Tomaso Group while the car collection, which was kept at Maserati’s Modena premises, legally belonged to De Tomaso (as they had magically been transferred in his name).

In July 1996, De Tomaso consigned and sent nineteen cars to the Brooks Auction house for auction scheduled for 02 December 1996. The Mayor of Modena intervened and asked local businessman Umberto Panini, who had made his money in sports cards (think baseball cards) to purchase the collection. The collection was withdrawn from auction and returned to the city of origin. Panini was well funded, having sold his sports card company to D.C. Comics, and has kept the collection in the Panini family’s dairy farm, famous for its award winning Parmigiano-Reggiano cheese. For those into museum history trivia, the building exhibiting the collection is actually a late 1800s rail station purchased from the nearby town of Ferrara, taken apart, and reassembled on the farm. The collection is Maserati focused, but has vintage farm tractors, motorcycles, and a few military vehicles. It’s worth the visit.