A Pilgrimage to Maranello – PART 2 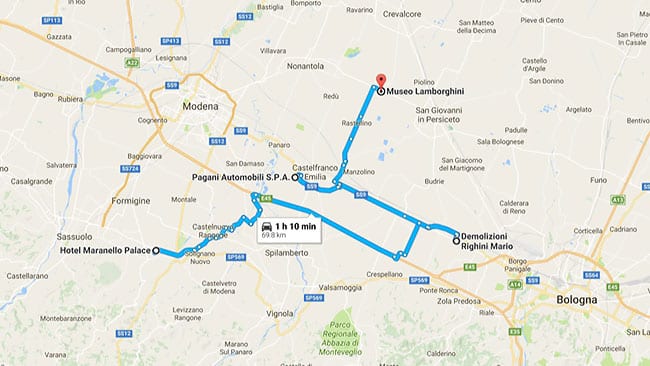 A Pilgrimage to Maranello – PART 2

As readers of this column know, we had traveled to Italy for RM’s Duemila Route auction in Milano followed by a two day whirlwind tour of the various shops and museums in the Modena-Maranello area.

Old cars and an older castle
On day two our first early morning stop was the famed Righini collection, kept in a medieval castle outside of Modena. For those into museum history trivia, Mussolini had invaded Ethiopia in 1935 which caused the League of Nations to issue an economic boycott against Italy. Il Duce decreed that all cars not road registered for 6 months were to be scrapped and recycled Scrap metal dealer Righini was so passionate about automobiles that he defied Il Duce and hid the best of them away, an offence that could have put him in jail! After the war the Righini family scrapyard obtained the rights from the various U.S. military governors to clean-up the left over war materiel (tanks, trucks, etc) and from this a further fortune was made. Who knows what cars they saved and later sold off over the last 75 years.

The first Ferrari
To the Ferrari aficionado, the centerpiece of the Righini collection goes to the legendary 815 from 1940, the first car built by Enzo Ferrari under his then-current company, Auto Avio Costruzioni. Scuderia Ferrari was formed by Enzo Ferrari in late 1929 as the race team for Alfa Romeo but in a clash of personalities, Enzo left Alfa in 1939. The agreement forbade Ferrari from restarting Scuderia Ferrari within the next four years and so Auto Avio Costruzioni (AAC) was founded in Modena to make aircraft parts for the Italian government’s war effort. In late 1939 AAC was asked by the Marquis di Modena to build and prepare two racing cars, one for him and Alberto Ascari and the second for Rangoni and Nardi to drive in the 1940 Brescia Grand Prix, and thus was born the AAC Tipo 815.

The designation “815” was based on the car’s eight-cylinder, 1.5 L. engine which in turn was based on the 1.1 L. engine from the Fiat 508 C Balilla 1100, in effect two 508C engines placed end-to-end, using a unique alloy block built by Fonderia Calzoni. It was fitted with a five-bearing crank and two 508C heads, high-tech for the time, with a single overhead camshaft, two valves per cylinder, and a semi-dry sump lubrication system. Four Weber 30DR2 carbs helped put out 75 hp at 5500 rpm. The 815 used a Fiat 4-spd gearbox and used a Dubonnet suspension with a live rear axle on semi-elliptic leaf springs, much like an American Sprint car of the period! Lightweight bodywork by Carrozzeria Touring resulted in a race-ready weight of only 1,378 lbs. giving a top speed of about 110 mph.

The two 815s, on race numbers 020 and 021, entered the 1940 Brescia Grand Prix, which ran nine laps of a 103 mile (166 km) street circuit. Rangoni and Nardi raced in 020, while Ascari and Giuseppe Minozzi raced in 021. After leading the 1500 cc class in the first lap, Ascari’s car developed valve problems and broke down. Rangoni then took the lead, set the lap record for the class, and had a lead of more than half an hour when his engine failed after seven laps. Lotario Rangoni died during the Second World War and his brother, Rolando, inherited car no. 020. Sadly that car was scrapped in 1958. Ascari’s car, no. 021, was raced by Enrico Beltracchini in 1947 before going to Mario Righini, where it remains today. Other great cars in the collection include Nuvolari’s 1933 Monza and Targa Florio winning Alfa Romeo 8C 2300 Monza s/n 2211137; an ex-Gilles Villeneuve Ferrari 312 T4, 500 Mondial s/n 0410 and several hundred other very desirable cars. The Righini collection is certainly one of the highlights of any aficionado’s trip to Italy!

The Supercars
After another obligatory two hour lunch we moved on to the modern era, visiting the Pagani factory and museum, home of the ultra-exotic and correspondingly expensive Zonda and of the new Huayra. Besides the many evolutionary variants of the Zonda displayed in its main entrance you will also see the track-day version Zonda R. Alas we only had time for a quick look into the factory floor where the skilled craftsmen hand build and assemble the carbon fiber tub and suspension of these amazing super sport cars, all hand made. It’s well worth the visit, but make time for the factory tour.

Nothing is more than twenty or thirty minutes away in the Modena-Maranello area, so our last stop was at the Lamborghini museum, in that tiny triangle between Bologna and Modena and Maranello. In 1998 Ferdinand Porsche’s Volkswagen AG went on a buying spree with the Audi division acquiring Lamborghini. Under German ownership Lamborghini found stability, funding and engineering expertise it had not seen in many decades. The two story Museum opened in 2001 and is attached to the main factory. A rotating collection of both factory-owned and client-owned show cars usually includes most if not all of the iconic models, from the 350 GT and 400 GT to the Islero up to the Miura, Espada and LP400 Countach. The Mimran brothers, Chrysler and Malaysian eras are represented by the various evolutions of the winged Countach, the LM002 and the Jalpa up to the Diablo variants. Also included are examples of the Lamborghini F1 powered Larrousse, Lotus, Ligier, Minardi and Modena F1 cars. The modern {Audi} era is represented by the Reventón and the other latest-greatest supercars that have made the Raging Bull into a legend. A factory tour can be reserved, showcasing an old-school automotive world where robots don’t exist and craftsmanship reigns. The Lamborghini museum needs to be on your bucket list.

The ones that got away
Alas two days doesn’t allow for time to visit the many other museums and shops in the Modena and Maranello area. On this trip we bypassed the Ferrari museum; the Stanguellini museum; the Ducati museum and Museo Casa Enzo Ferrari. Next to the Fiorano track is Zanasi, the official factory body shop that is used to paint the new cars that are requested in “odd” colors and modern Ferrari crash repair work. In Modena both Carrozzeria Marage and Carrozzeria Cremonini are amongst the shops used by the Classiche department. Top Motors in Nonantola are Lamborghini specialists while Maserati fans should put Tralli and Candini on their bucket lists. For those into shopping, we missed luggage maker Schedoni; Shopping Formula 1 for books and scale models, Warm Up for scale models and Hors Ligne for even more Ferrari related items. Plan on spending a full week and you will still miss a few.

Italy is a living museum, from the coliseum to countless castles and museums. The people are ultra-friendly, the two-hour lunches are a relaxing break and you can’t get a bad meal in Italy! Where else in the World can you find history, culture, fine cuisine, Ferrari, Lamborghini, Maserati and Alfa Romeo and more? If you’re reading this column, the car shops and automotive museums of Italy need to be on your bucket list.