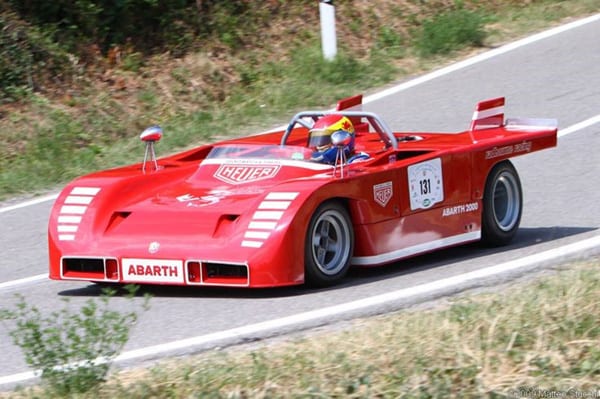 From Ferrari Classiche to Abarth/Lancia Classiche
Readers of this column will be familiar with Ferrari Classiche which began with a minimalist single page Heritage certificate in 2002. The certificate was easily obtained online by submitting the model, the chassis, engine, trans and diff numbers, no inspection required. In the same time period the FIA was starting to inspect and certify historic race cars. Ferrari feared losing control of the parameters defining “originality” of many of the most historic (and expensive) racing Ferraris and so introduced the Classiche department in 2005. From the beginning there was a defined inspection, photo, application and submission process. If accepted, the Classiche committee would issue its now ubiquitous hard-bound red book in its matching case, badged with a replica of the cars original data plate identifying the car by serial number and model type. Today the owners of the more valuable 1950s, 1960s and 1970s Ferraris have little choice but to go through the Classiche inspection and restoration process to get the potential added value of the Red Book certification.

FCA Expands the Brand
Ferrari’s parent company, FCA (Fiat Chrysler Automobiles) also feared losing control of the parameters defining “originality” of the most historic Abarth and Lancia race and rally cars. In November of 2015 FCA introduced the Abarth and Lancia Classiche department for cars over twenty years old, while Alfa Romeo will be incorporated into a similar program in 2018-2019.

Abarth, a brief history lesson
Abarth was founded in Bologna in 1949 by Carlo Abarth with Carlo’s astrological sign, Scorpio, as the company logo. Through the 1950s and 60s Abarth built hundreds of Cisitalia and Fiat based sports and GT race cars, the best known being the famed 750 Zagato, built using a Fiat 500 chassis with a highly modified Fiat engine. In the 1960s, Abarth was successful in both hillclimbs and sports car racing in the 850cc to 2000cc classes. In 1971 Abarth was sold to Fiat and was soon limited to building only high-performance exhaust systems and tuning kits, mainly for Fiats. In 1981, Abarth & C. ceased to exist but was reborn in 2007 with the launch of the current company, Abarth & C. S.p.a. and is best known to Americans as the builder of the Abarth-badged Turbocharged Fiat 500s currently sold in the US.

Lancia, yet another brief history lesson
Lancia Classiche is certainly relevant to Lancia these days, which is ironic for what has become a dormant company. Video games such as Gran Turismo have made exotica such as Alitalia-liveried Stratos and Martini-liveried 037s, S4s and Integrales high on the younger collector’s consciousness. Yet few Americans know that in the early post war years Lancia enjoyed a cult-like status. It was accepted that Fiat sold cars to the masses, Alfa Romeo sold cars to the sportsmen and Lancia sold cars to the connoisseurs. Lancia’s specialty was high quality small to mid-sized cars with state of the art technology built in short production runs of near-custom variants of their basic models to meet the expectations of a connoisseur customer base. It was a unique niche-marketing strategy that had served the company well, but was completely unsuited to the US market.

Lancias were only officially sold in the US through Fiat dealers from 1975 until Fiat left the US market in 1982. In Europe, however, they were ferocious competitors on the rally circuits and developed a very devoted customer base. Unfortunately, the 1960s were not kind to niche marketers and so both Lancia and Ferrari found themselves being absorbed into Fiat in 1969. Under Fiat, Lancia won the 1972 International Rally title with the Fulvia and dominated the World Rally Championship which started in 1973! Lancia won the WRC’s constructors’ titles with the Stratos (1974, 1975 and 1976), the 037 (1983) and the Delta Integrale (six consecutive wins from 1987 to 1992). Indeed, the Integrale is the most successful individual model ever to compete in rallying while Lancia is, statistically, the most successful rally marque ever, despite having withdrawn at the end of the 1993 season.

In Sports and prototype racing the Lancia Beta Montecarlo GT car, with a mere 1.4 liter turbo 4-cylinder, won the FIA’s 1980 World Championship for Makes and the 1981 World Endurance Championship for Makes. In 1982 Lancia moved up to Group 6 with the LC1 Spyder, followed by the Group C LC2 prototype in 1983, powered by a twin-turbocharged 750 hp Ferrari QV 308 engine. The LC2 was more than a match for the hordes of Porsche 956 and 962 GTP cars in terms of raw speed, winning 13 pole positions over its lifetime, however its results were limited by poor reliability, fuel economy and the overwhelming numbers of factory backed and privateer Porsche 956 and 962s that dominated the series. In the end the Lancia LC2 won only three European and World Endurance Championship races before Lancia dropped out of prototype racing at the end of 1986 to concentrate on rallying.

Thanks to Raffaele we were able to arrange for their two inspectors, Maurizio Zarnolli and Luca D′agostini, to fly to Florida in early Oct. to inspect and certify a Fulvia, a Stratos, an 037, an intergrale, an S4 and a just restored Lancia LC2. They then flew to Chicago to inspect and certify another LC2 plus an S4 Stradale, a Stratos and an Integrale street car. They then flew on to Seattle where they inspected yet another Stratos and another Integrale street car before flying back to Italy.

Just as Ferrari Classiche is based in Ferrari’s home town, Maranello, Abarth Lancia Classiche is based in Fiat’s home town at Mirafiori, Fiat’s massive factory at Via Plava 80, in an industrial corner of southern Turin. In its mid-1970s heyday Mirafiori gave its name to the Fiat 131. Today the facility churns out truckloads of ultra-cute Fiat Abarth 595s, now outdated Alfa Romeo Mitos and Maserati’s market-making Levante SUVs.

A Lancia lover’s pilgrimage
In late November, and early December, I visited Spain, France and Italy to inspect multiple Lancia race and rally cars at seven different locations. As part of my trip, on 01 Dec., I had the pleasure of visiting the display area, the offices, the workshop and the rally car preparation shop of Officine Abarth, tucked into the southern side of the massive Mirafiori facility. Just as one must be driving an FCA car to be allowed into Ferrari Classiche at Maranello, one must be driving an FCA car, (in my case a FIAT 500X mini-SUV), to be allowed onto the grounds at Mirafiori.

I was met by Luca D′agostini, who gave me a tour starting with Abarth’s entrance area, which houses a dozen of its most significant cars from the brand’s history. The most interesting was the 1956 Bertone 750 Record, based on a Fiat 600 chassis, which, thanks to great aerodynamics, managed to hit 118mph with a mere 47hp engine. Also there was a modern Abarth, entry-level priced single-seater spec racer and the new 300hp Abarth 124 R-GT rally car finished in its 1970s Group 4-style livery, plus multiple modern Fiat/Abarth econ-box based rally cars.

Next was the adjoining Abarth rally shop where dozens of new Abarth 124 R-GT Spiders were being rally prepared and occasionally track-tested around the factory grounds at high speed. No photos were allowed so the next stop was a faithful recreation of Carlo Abarth’s 1960s office before going into the spacious Classiche workshop. My work-shop favorite was LC2 s/n 006, the same car that was run up the hill at Goodwood. The most technically interesting was the Lancia ECV2, a one-off car built for the proposed 1986 Group S rally class which was cancelled after multiple accidents and deaths in the awesomely fast 1985 Group B class. An 800kg rally car with a mid-engined 830hp was a disaster waiting to happen in a forest stage lined with spectators!

Explaining the program
Over coffee Luca and Raffaele volunteered that the FCA Heritage Lancia Collection (at another location) contained 120 significant Lancias and that, to date, Abarth Lancia Classiche has inspected and approved more than 200 cars. Also off-site are the combined archives for Fiat, Lancia and Abarth, while Alfa Romeo historical records are located in the Historical Alfa Romeo Archive based in Arese, near Milan. Both Luca and Raffaele confirmed that much like Ferrari Classiche, Abarth Lancia Classiche is all about restoring and recording the past. For European based cars the Classiche workshop will inspect and repair or restore a client’s car. If the workshop discovers non-original bits, they can supply and install original parts or freshly remade parts as needed. Much like Ferrari, Abarth Lancia Classiche issues a hard-bound book, although in white, in its matching case, badged with a replica of the cars original data plate identifying the car by serial number and model type.

The standard complaints with Ferrari Classiche are that it can take six months or more to get the Red Book in hand and that costs have effectively doubled in the last seven years. Abarth Lancia Classiche wants to streamline and expedite the process at a lower cost basis. They advise that their cased presentation “White Book” pack, with the car’s history, photos and plaque certifying the client’s car’s originality, depending on the car and the research time needed, can be delivered in only 60 days. Base costs start at a mere 1,000 €uro for the inspection and 450 €uro for the White Book presentation pack but can quickly go up for more complicated or esoteric models, plus travel time, research time and expenses. If you have an interesting Abarth or Lancia and have questions about the Classiche process, feel free to send us an E-mail or give us a call, We are always ready to discuss interesting cars.

Thanks to Thor Thorsen, Alastair Henderson, Ross Bowdler, Arnoud Coenen and Bjorn Martensen for their feedback on this article.