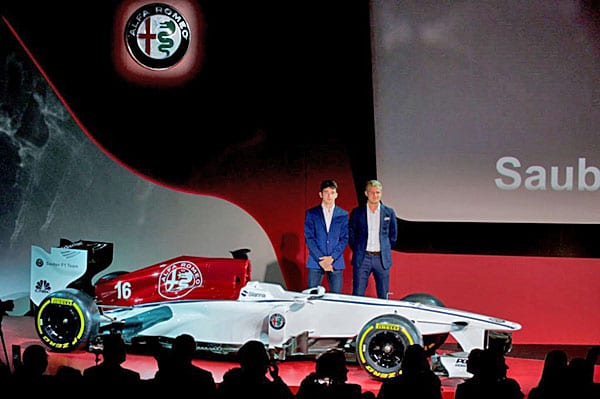 Alfa Romeo is back
On 02 Dec. 2017, FIAT Chrysler Automobiles CEO Sergio Marchionne launched a new partnership between Alfa Romeo and the Sauber F1 team at Alfa Romeo’s Arese headquarters, with Alfa Romeo returning to Formula 1 as the branding sponsor to the Sauber F1 team for the 2018 season. The 2018 cars will wear Alfa Romeo colors and will use the latest 2018 Ferrari power units, a deal already inked between Sauber and Ferrari in July 2017. The new deal with Ferrari will mean considerably greater competitiveness for the team as Sauber was forced, for budgetary reasons, to use 2016 Ferrari power units in the 2017 season, scoring just 5 championship points.

Die-hard Ferrari and F1 aficionados will know that Enzo Ferrari joined Alfa Romeo as a driver in 1920, founded Scuderia Ferrari in 1929 and assumed management of the Alfa Romeo’s Grand Prix team, Alfa Corsa, from 1932 to 1939. Thanks to the legendary P2 and P3 Grand Prix cars, Alfa Romeo was able to put up a brave but losing pre-war fight against Mercedes and Auto Union. Post-WWII Alfa Romeo absolutely dominated Grand Prix racing from 1946 to 1949, winning almost every Grand Prix they entered. When Grand Prix racing was rebranded as Formula One in 1950, Nino Farina won the inaugural F1 World Championship behind the wheel of a then-twelve-year old supercharged Alfa 158 followed by Juan Manuel Fangio winning the Championship in 1951 driving an Alfetta 159, thanks to its evolutionary two-stage supercharger. Alfa was forced to withdraw from F1 in 1952 because of Ferrari’s success with the 375 F1 cars and the loss of Italian government funding of Alfa’s race program. In 1977 Alfa returned to the F1 circus with the flat-12 powered Alfa 177, which was soon replaced with the Marlboro sponsored V-12 powered 179 and later carbon fiber tubbed 182. For 1983 to 1985 the Benetton sponsored Alfa switched to 1.5-liter turbocharged V-8s before leaving F1 at the end of 1985, having never won a race.

Marketing 101
Fiat Chrysler have invested billions of euros since 2014 to develop new Alfa Romeo models to compete against other premium rivals and shed the reputation for poor quality and service that has hit sales for three painful decades. Several attempts at reviving the Alfa Romeo brand have stalled, however, and only about 72,000 Alfas were sold in 2014. Marchionne has said he aims to raise sales to 400,000 units by 2018 and to do that requires aggressive global marketing. Speaking about the new arrangement, Marchionne said, “This agreement with the Sauber F1 Team is a significant step in the reshaping of the Alfa Romeo brand, which will return to Formula 1 after an absence of more than 30 years… Alfa Romeo fans will once again have the opportunity to support an automaker that is determined to begin writing an exciting new chapter in its unique, legendary sporting history.” Marchionne further added that “The Alfa Romeo engineers and technicians, who have already demonstrated their capabilities with the newly-launched models, Giulia and Stelvio, will have the opportunity to make that experience available to the Sauber F1 Team.”

Maserati makes a comeback
Only days after the Alfa Romeo announcement, talks of Maserati returning to F1 as the branding sponsor of the Haas F1 team filled the automotive news. Just as Alfa Romeo will become the title sponsor of the Sauber team, Haas is the logical partner for Maserati as Haas has been powered by Ferrari engines since the first race of the 2016 season. Like the Alfa Romeo-Sauber connection, adding a Maserati Trident logo to the Haas team cars is a much simpler and easier option than starting a new team and would give Haas an infusion of cash to help it become more competitive. Maserati’s deal is rumored to be valued at 20m €uro, which is effectively what Haas is paying Ferrari for use of its power units each season. Ferrari supplies the engines, Maserati supplies the logos and paint scheme, while Haas gets the latest Ferrari F1 engine technology for free! As per Sergio Marchionne, “Is it possible for the Haas arrangement to turn into something other than what we have today? The answer is potentially yes, but we’re very far away from a resolution on that matter, but it’s possible. We’ll see. Time will tell.”

Owned and funded by machine-tool magnate Gene Haas, Haas F1 is the only American team currently racing in F1, but Haas cars are already mostly Italian so the connection is more than mere marketing. Haas would get its first-ever big sponsor, Maserati would have an easy and affordable way back into F1, and Dallara, who builds the Haas chassis, is just down the road from both Maserati and Ferrari, where Hass leases wind-tunnel time from Ferrari. Like Alfa Romeo, its corporate cousin, Maserati was once an F1 winner, but the last of its two championships came in 1957, with a legendary driver and car, Juan Manuel Fangio and the 250F, respectively. Maserati’s fortunes deteriorated, forcing it out of F1.

Liberty Media
Without going too far down the rabbit hole of technical trivia, an MGU-H (Motor Generator Unit- Heat) is an electrical unit unique to F1 fitted between the turbocharger turbine and compressor that generates electrical power from the turbine. When the turbocharger is on boost that energy is saved in a battery. That saved electrical power is used at slow engine speeds to spin up the compressor and provide immediate low-end boost; an exceedingly complex technology to eliminate turbo lag. As an undesirable side effect, the MGU-H also acts as a muffler, cutting down on the sound of the engine at high rpm.

Conversely the MGU-K (Motor Generator Unit- Kinetic ) would be retained as it is very similar to the system in hybrid production cars, with an electric motor connected to the engine. During braking it recovers the energy that is normally lost as heat, storing it in a battery. That stored energy is then used to electrically assist the V6 turbo engine off slow speed corners or in high speed passing. The net result is almost 1,000 hp from a 1.6 liter (97.5 cubic inch) hybrid engine!

Having spent hundreds of millions to develop the current MGU-H and MGU-K systems, super-lightweight battery systems and hybrid engines, the four engine manufacturers, Mercedes, (who also provide engines to Force India and Williams); Renault, (who also supplies Red Bull and McLaren); Honda, (who supplies Toro Rosso) and Ferrari (with Hass/Maserati, Sauber/Alfa Romeo and, of course, Scuderia Ferrari) were not pleased with the new rules. None wanted the cost and complexity of continuing the current engine development programs while also adding an all-new engine program aimed at the 2021 rules, which would add tens of millions of €uros or more, to their budget annually for the next three years. In less than 48 hours Renault and Mercedes voiced fears of an unnecessary arms race, while Ferrari threatened to quit F1 completely. Negotiations will continue as some proposals, such as lifting the revs limit from today’s MGU-H and fuel-restricted 12,000 rpm to 15,000 rpm to improve the sound of the engines is supported by all.

Sergio Marchionne
In 2004, after the death of Umberto Agnelli, FIAT’s chairman, Marchionne became CEO at FIAT, introducing an open-office management style “where everyone is expected to lead” and removing layers of bureaucracy. He next negotiated far-more-efficient workplace regulations with Italy’s Communist unions, returning FIAT to profitability in 2006. Only a year later, in July 2007, Marchionne’s team re-introduced the FIAT 500, finding new market share in auto markets once lost, such as Mexico and Australia then entered into a joint venture in China and returned to the Canadian and American markets with the 500 in 2011. In November 2012 the one-millionth FIAT 500 rolled off the production line and in July 2017 the two-millionth FIAT 500 rolled off the assembly line. With FIAT owning 181 plants in 30 different countries Marchionne truly needed a global perspective.

Under Marchionne, Maserati was split off from Ferrari in 2005 and was profitable by 2007, for the first time in decades. In 2012 Marchionne committed to a €1,2 billion production upgrade with the goal to take worldwide Maserati sales from 6,300 units to 50,000 units per year by 2015, a massively optimistic and ambitious plan.

In June, 2009 Marchionne again proved his global perspective and negotiating skills when FIAT Group was given (at no cost) a 20% stake in Chrysler Group as Chrysler emerged from Chapter 11 bankruptcy protection. Sales of Chrysler, Dodge, Jeep, Ram, and FIAT vehicles in North America rose from 1.2m in 2009 to 2.1m in 2013 and in 2014 FIAT Chrysler delivered 4.6m cars. A planned investment of $63b in plants and new models is scheduled to increase FIAT Chrysler deliveries to 7m cars by 2018.

While FIAT, Maserati and Chrysler have been marketing masterpieces, not all battle plans succeed. Alfa Romeo was Marchionne’s biggest headache when he took over as FIAT CEO in June 2004—and it remains so over a dozen years later. In 2006 Marchionne said he wanted to double Alfa sales to 300,000 units by 2010 but 2010 global sales were just 115,000 units and the 2015 goal was a mere 155,000 units. Having turned FIAT, Maserati and then Chrysler into money-makers, Marchionne may yet save Alfa Romeo.

Follow the money, a three-team voting block
F1 follows a very complex share model with 2017 revenues estimated at $1.38bn with the total profit split evenly between Liberty Media and the teams. Ferrari is one of three teams that shares in what is known as the Constructors Championship bonus fund. It gives Ferrari a minimum of $30 million annually, but it doesn’t stop there, Ferrari also gets 5% of F1’s profits all to itself. This comes to at least $62.2 million every year, bringing Ferrari’s guaranteed prize money to nearly $100 million before a single race begins. Total return to Ferrari for the 2017 season was over $200m, while Sauber, who finished seventh, was paid over $70m!

Winning in F1 is not optional at Ferrari, the only team to have competed in every F1 season since its inauguration in 1950. It is also the most successful team, with 16 Constructors Championships and 15 drivers’ titles. Far from following through with its threat to withdraw from Formula 1, Ferrari seems to be doubling down on the sport with the Alfa Romeo-Sauber and Maserati-Haas teams potentially creating a three-team voting bloc against the FIA’s proposed changes to its 2019 engine regulations.

With tobacco and booze sponsorship out of the equation these days, F1 is primarily a sales platform for car manufacturers. Liberty Media is very focused on trying to build more awareness/interest/events in the world’s largest car markets, the US and China. With twenty-one races in the 2018 season, each with fifty million or more viewers, a return to F1 will put both Alfa and Maserati back on the screens of hundreds of millions of F1 fans. Having spent billions of €uro to re-launch both Alfa and Maserati, another 20m €uro each to bring them back to F1 is absurdly low-cost marketing! Win or lose, expect to see multiple posters of the new Alfa Romeo and Maserati F1 cars on the walls of your local FIAT, Alfa Romeo or Maserati dealer and the F1 cars incorporated into every level of their marketing!