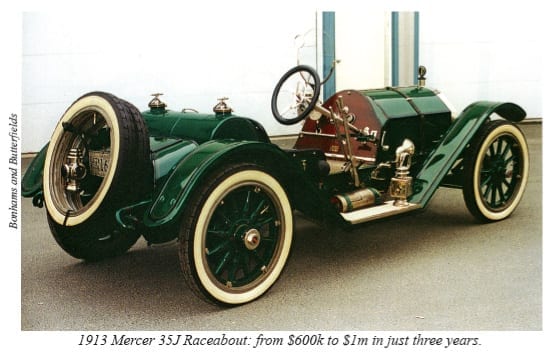 In the May 2004 issue of SCM, I wrote about the market values of muscle cars-Hemis in particular—and how they had soared past those of more-or-less comparable Ferraris in the past two years. Since then, the Ferrari market has grown stronger, but the market for muscle cars has gotten even hotter. It’s not only ’50s and ’60s Detroit Iron that’s hot right now, but pretty much every sort of collectable domestic vehicle, from vintage race cars to specials to Classics. Prices for these cars have continued to rise higher and faster than anything we’ve seen in the Ferrari world since the glory days (if you were a speculator) of 1989.

Now that Hemi ’Cudas have vaulted far past the price range of Daytonas, the muscle car guys continue to say these cars are all being sold to end users, not speculators, and that the market remains strong. We’ve all heard that before, haven’t we?

In the late ’80s, Daytona coupes went from $75k to $500k, and Spyders zoomed from $150k to $1.5m in just four years. But the bubble burst in early 1990, and values have never really recovered. Ferrari buyers have clearly learned their lesson, as evidenced by today’s Daytona prices. Will the Mopar gang have to suffer a similar come-uppance? Time will tell, but the price of admission has simply gone nuts in the Hemi world, making what were once comparably priced collectibles look like Wal-Mart blowouts.

PRE-WAR APPRECIATION
It’s not only Hemi prices that are climbing. Turning to the world of Duesenbergs, a nicely restored 1934 Duesenberg J Convertible Coupe (S/N 2560) with a body by Walker La Grande sold for $2.75 million at the recent RM sale in Arizona. Yet just a few years back, this same car set a world-record price for Dueseys, selling for $1.98m at the RM Meadow Brook Auction in 2001.

Even Brass is not immune to this current collector frenzy. A 1913 Mercer 35J Raceabout best described as “an older restoration” sold for $1m at the Bonhams & Butterfields Wiglesworth auction in September 2004. Not three years ago this was a $600k to $700k car, yet today it’s setting another world-record price.

These pre-war cars were actually the first collector cars to really take off in price back in the 1970s. Of course, this was far before anyone considered Ferraris as investments. Through the 1980s the market for old American iron was very good, though nowhere near the craziness we saw in the Ferrari market during the same time period. Common wisdom said that the Duesenbergs, Packards, Auburns and the like were being sold to collectors who remembered these grand cars from their youth, and were finally able to purchase their dream car as they approached retirement age.

The theory was that as these men grew older and passed on, the market for the Classics would slowly die. And for the past decade, indeed, the prices of classics have been static or in decline. But for the best of the best, there is suddenly an all-new group of buyers snapping these cars up—baby boomers in their late 40s or 50s. For these guys, it’s a ripe area for branching out and diversifying their collection.

BUY NOW BEFORE IT’S GONE FOREVER
These top-tier collectors are now buying not only the best Ferraris, but the best muscle cars and the best of the pre-war stuff, too. Today it is not uncommon for a Duesenberg to be parked next to a Ferrari GTO and a Hemi ’Cuda. These collectors are “car guys” and want the best of all eras and types, whether sports cars or heavy iron.

We need only look at the current owner of the “Mormon Meteor,” a one-off Duesenberg SJ which sold at the Gooding & Company Pebble Beach auction in 2004. It made $4.5m, then privately resold after the auction to a well-known Midwestern collector for even more.

The car now shares space in his collection with many super-collectable Ferraris, including an F40, an F50, an Enzo and an ex-Francorchamps P3/4. His garage also includes a fabulous Corvette race car collection whose crown jewel is a one-off Corvette Grand Sport roadster. The owner is certainly not a speculator—none of the cars in his collection are for sale—and he is comfortable with the purchase prices, as he buys what he feels are the best of each era.

So I believe the rise in values of non-muscle American cars is the real thing, and it has legs.

However, let’s not fool ourselves into thinking the market isn’t also being driven by that most common of human emotions: greed. Given that you are lucky to get 4% interest from your bank, watching your $200,000 Hemi ’Cuda appreciate to $400,000 in a year seems pretty good, doesn’t it? And it’s even better if you sell it and 1031 Exchange your money into another similar muscle car.

But beware: After 31 years of dealing in Ferraris, I have to say that any time a market doubles and then doubles again in a short period of time, it’s simply a game of musical chairs. This time I’m afraid we’re just waiting for the Star Spangled Banner to stop playing.