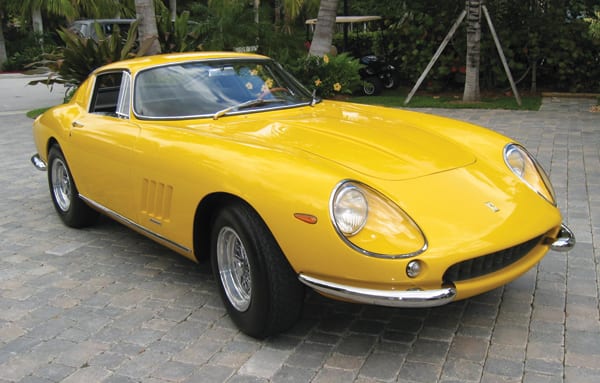 While selling exotic cars is an inexact science, it is a tenet within the trade that buyers want to pay something “back” of the dealer’s cost, while sellers want to “net” some number based on the highest result at the most successful, recent auction. Buying from a classic car dealer allows personal time for back-and-forth-questions-and-answers, negotiation time, a pre-purchase inspection and for the buyer to fly in for an inspection and test drive.

In the auction world, rapid-fire bidding and the adrenaline rush of a one-minute attention span to buy or pass introduce a rush of drama and emotion into the equation. If several well-healed type-A buyers want the same car, at the same place, on the same day, big egos backed by big bank accounts can result in very high prices. Conversely, because the crowd is usually limited to a few thousand people at best, if no one really wants to take a certain car home on that day, the bidding and final sale can be well back of market. Interestingly, two sales from the RM auction at Amelia Island on March 13th illustrate these points.

The auction story itself is told in full on p. 38 of the June 2010 issue of Sports Car Market.

The over-the-top car
The over-the-top sale was a very nicely restored steel-bodied Giallo Fly 275 GTB/4, s/n 09337. Starting with a market-correct estimate of $950k–$1.2m, the bidding quickly went far beyond those numbers, closing at $1,650,000, about $400,000 over today’s market. While the buyer probably went home satisfied with his acquisition, as well as his victory in the bidding war, the seller had to be beyond satisfied.

S/n 09337 was first restored in 1991 and again in 2003 and was fastidiously detailed with the intent of being a 100-point car. It had scored Platinum several times but never hit the magic 100, missing by one point, although without question it was a truly great car with a great provenance. But let me repeat, it over-sold by at least $400,000, in this case somewhere between 33% and 40% over today’s market, exacerbated—should we have forgotten already—by the fact that we were in a worldwide recession and the classic car market was moribund only a few months ago.

And the one that was undersold
On the other end of the spectrum, there’s s/n 09501, one of only 16 alloy-bodied 275 GTB/4s built—representing the pinnacle of street 275s. This alloy 275 GTB/4 had hit a guardrail in 1976, destroying the left rear quarter of the car. It was sold to a very talented restorer who put it into storage with several other worthy projects. In the mid 1990s, s/n 09501 was given a total restoration to very high standards and then shown at several East Coast high-grade concours. Going into Amelia, auction estimates were correct at $1.35m–$1.75m—about $500k, or 40%, more than the steel 275 GTB/4.

As the auction began, the alloy car (s/n 09501) went first, with the goal of setting a high mark for the steel car (s/n 09337) to follow. The bidding went up fast then hit the wall at $1.265m. “Alloy” was sold to a very astute investor and collector from New York about $250k short of where most people expected it to sell.

While it is true that s/n 09501 had been damaged in the past, a quick walk through my database shows eight of the 16 alloy 275 GTB/4s were damaged heavily or burnt out early in their lives, so this was not an unusual situation for any 40-plus-year-old Ferrari. Additionally, s/n 09501 had non-factory a/c and a couple of undocumented or questionable non-standard features. Unlike many show cars, it had been driven and showed its miles, and thus in a business where auctions “sell the sizzle,” it offered a lot of steak, but not a lot of sizzle.

The buyer and I emailed to each other
I emailed the new alloy owner and he answered as follows: “I came to Amelia Island planning on buying the alloy 4-cam and was expecting to pay up to $1.5m all in. I was happy to have paid $1.265m, but after the yellow (steel) car (which I thought had several flaws) sold for $1.65m, I could not help feeling my father was right when he told me it is better to be lucky than smart.” He continued, “As far as (the seller of the alloy car), I think he was very upset, and initially I think he blamed me—in addition to (the auction house). We had a nice chat and I explained to him that I was just the bidder.”

“Steel” was relatively freshly restored, had been a trailer queen with very well documented provenance, and was ready to go directly to a concours or rally. I’m told the steel car’s buyer didn’t want to spend years restoring a car; he wanted to buy one that was done and was encouraged by a Southern California restoration shop owner to do so. He may have set a new high, but he got what he wanted… without waiting. As they say in the restoration industry, “You can always make more money, but you can’t buy more time.” The steel car delivered a sizable portion of steak with lots and lots of sizzle.

A would-be seller’s reaction
The follow-on effect to would-be sellers was illustrated to me on the Monday after the sale of both cars, when I received an email, which read (edited): “Michael, I’ve had a 275 GTB short-nose 2-cam for over 35 years. It has won a national concours (FCA Washington DC), numerous car shows. 47,000 original miles, all tools, books, etc. A very exciting Ferrari. Question: Amelia Island has shown the rise in 4-cams, what do you think of future sales? Value? Should I keep it or sell it? I think in the short term it will break the $1m mark.”

Is the glass half-full or half-empty?
While this would-be seller (and several others) rejoiced in the over-market sale of s/n 09337, they were in denial on the under-market sale of s/n 09501. Another quick check into my database found a 2005 email from a well-known dealer who had seen the 275 short-nose in the email above and had emailed me, describing it as “…in a body shop and partially apart. Has lousy paint, needs interior, headliner, not running for many years.” Looking further in my database, the 275 GTB short-nose had finished 2nd in class at the 1987 FCA National meeting in Tyson’s Corner, Virginia—so 23 years ago. Needless to say, concours standards have changed since 1987. It will be many years before his unrestored 275 short-nose will be a $1m car.

I’m the first to say I’m thrilled at the rebound in the market in only a mere three or four months, and it looks better every day. But my response to both would-be 2-cam sellers and to the auction results in general goes back to the opening of this column. Sellers want to “net” some number based on the highest result at the most successful recent auction. As I replied to the owner of the short-nose, “Not sure I share your enthusiasm. Yes, the yellow 275 GTB/4 sold for a number that is about $500k over market, but likewise the alloy 275 GTB/4 sold at about $250k back of market. So… as at all auctions, some cars sell way over market, some way back of market. Just as one sparrow doesn’t make it spring, one car selling way over-market doesn’t make the market.”