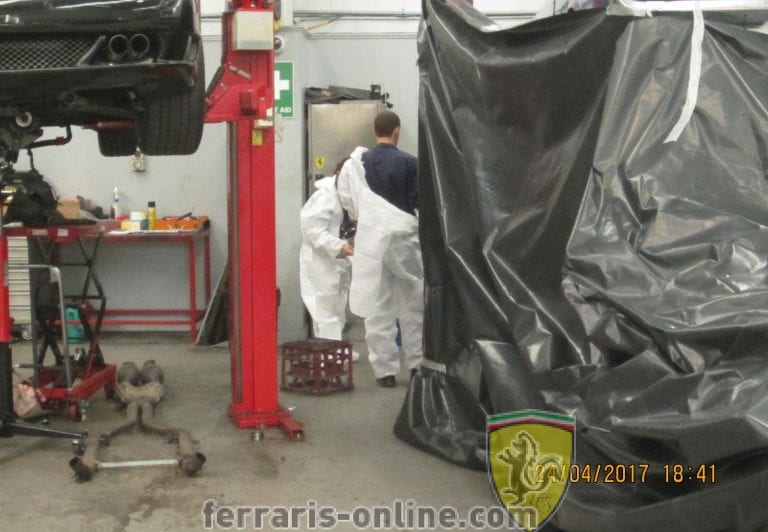 Our story begins in 2003 when the Australian government issued a zero-tolerance ban on any and all asbestos products, aimed mainly at imported Chinese drywall, a problem America also faced at the time. Fast forward to March 6, 2017 when, without prior warning to Shipping and Customs agents, let alone to owners, the Australian Border Force (ABF) began randomly testing all imported collector cars for asbestos, without any industry consultation, procedures or practices in place. One of our clients had two cars already en-route to Australia and so had no choice but to comply. One was a 1966 Shelby Mustang 350 GT and the second a stock 1966 Mustang donor-car, found together as “barn finds” and imported into Australia for restoration.

Making rules on the run
Inspectors were picked from an ABF approved list of asbestos assessors, none of whom had collector car experience since this was an all-new process. An ABF officer and a representative of the customs brokers also had to be in attendance while the owner/importer was required to provide two mechanics, tools, a floor jack, jack stands, safety clothing and masks. All five charged by the hour, with the work being done at the customs wharf.

The inspection of the Mustangs took a full 8-hour day times five people. The front brake pads, rear brake shoes, exhaust manifold and exhaust pipe gaskets from both cars plus the add-on A/C compressor from the stock Mustang were all taken for inspection. Some of the sealer from inside the wheel wells, around the firewall and the caulking around the windshield were also removed for testing. Additionally, samples were cut from the headliner material, the door frame inner padding, the hood scoop, the brake air ducts, the windshield washer bag and sample sections were cut from the wiring loom. As the 350 GT was pushed onto a hoist the ribbed aluminium oil pan fins were damaged. The pleas of both mechanics to cease the destructive sample-taking were ignored by the inspector, the customs agent and the ABF officer. As the day wound down the inspector recommended the removal of the engine and transmission for disassembly and removal of the front fenders and doors for further examination. Because of that day’s interpretation of the regulations, the owner was not allowed to be at the inspection.

Moving to plan “B”
During & after the destructive first inspection, endless e-mails and calls between the customs broker and the ABF, the owner was able to get both mustangs taken to a well-respected exotic car sales and service center in Sydney. ABF required both a removal expert and an assessor to supervise the work, a hygienist to test the air for asbestos (how could I make this up) and two mechanics in space suits, all to remove a clutch. The caulking around the windshield, firewall and inner wheel wells was also removed but reason prevailed and so the engines were not disassembled. Both cars were then released to the owner.

Total time was two months. Costs including the two removal experts, two assessors, two mechanics, (twice) the hygienist, plus the asbestos lab analyses and bulk sample report was approximately $15,000, not including the damage and cost to replace the seized parts on both cars plus the possibility of fines for non-compliance.

Meanwhile, across the continent
Meanwhile, in Perth, on the other side of Australia, an enthusiast with a DKW obsession imported a rare 1953 DKW F89, a two cylinder, 23 hp, 684 cc post-war Germany econo-car built from 1950-54 and based on a pre-war design. Although 60,000 DKW F89s were built, most were scrapped as the German economy recovered and much better cars came to market. DKW was acquired by Mercedes in 1957, sold to Volkswagen-Audi in 1964 and DKW ceased to exist.

The DKW in question was sold new into Portugal, was complete, relatively rust free and at $7,000 Aus ($5,400 USD) was a very affordable and unique collector car. As the third collector car to be inspected and the first in the Perth area, the owner was lucky. The asbestos inspector was both reasonable and horrified by the tale of the two Mustangs imported into Sydney, which had quickly gone through the collector car community. The initial inspection found asbestos in the rear brakes, the head and manifold gaskets and the under-coating in the wheel wells. The car was immediately impounded and the real problems began.

ABF again changes the rules
The owner requested that he and a mechanic remove the offending material, but this was rejected by the ABF as they were not “authorized” to enter the “secure” dockside area. ABF insisted on a professional asbestos remover, but none had vintage car experience. The owner next asked to attend with the chosen asbestos remover but was again denied access to his car. A week later ABF agreed to the owner’s request to have his mechanic remove the asbestos, but after completing the paperwork, permits and an inspection time, ABF decided that removing the parts in the storage depot might be unsafe and the permit was cancelled.

ABF first declined and then approved transport to Classic Gasoline, a collector car service center in Perth. ABF then again changed their mind and advised the car could only be moved to a certified asbestos removal center. After realizing there was no certified asbestos removal center that could do the work, ABF relented and permitted the car to be moved to Classic Gasoline. Paperwork recommenced, but at the last-minute Quarantine intervened, advising that the DKW could only be moved after it had been spray cleaned, but that it could only be spray cleaned after the asbestos was removed. As the owner wrote, “Catch 22 meets Franz Kafka”.

Back to plan “A”
Everyone agreed to go back to plan “A”, a removal time was again booked only to have someone at ABF again demand the work be done by an asbestos specialist. After yet more calls, e-mails and negotiations it was finally agreed that ABF, the original inspector, two mechanics from Classic Gasoline and the owner would inspect the car, agree to the work to be done and the owner and mechanics would then be allowed to complete the work at dockside. Thanks to the DKW’s small engine, it was lifted out without a hoist for disassembly. After even more paperwork, ABF certified the removed parts and arranged their seizure and destruction. The additional storage fees were $3,000, the mechanics charged $1,500 and the shipping agents were another $1,500 plus the cost of finding and replacing the seized parts, so almost equal to the original $7,000 purchase price. The local ABF did not issue any fines for the non-compliant parts.

The good news is that most new cars, world-wide, were asbestos free by 1999, but the bad news is that virtually all cars built before 1999 have asbestos-based components. All imported cars must obtain an asbestos test for their vehicles BEFORE they are shipped to Australia, but few countries have certified collector car asbestos inspectors. If asbestos is identified, it must be removed before the vehicle is shipped and owners must confirm the vehicle is asbestos free. The ABF doesn’t have the time, space and manpower to inspect every car, but no-one should take the risk of being caught up in the costs and damage of a random inspection, the possible seizure and destruction of the car plus the reality of fines because the seized parts were not zero asbestos compliant.

The Australian Imported Motor Vehicle Industry Association is lobbying the ABF to standardize a consistent inspection regime, but the extra red tape, inspection costs and uncertainty have slowed imports to a crawl. Additionally, the new rules apply to imports AND exports, which will be another yet-to-be-defined learning curve!

But wait, it gets more complicated
If the asbestos-related import/export restrictions were not enough, the Australian government is also ramping efforts to keep what are described as “culturally significant automobiles” in Australia and is considering the seizure of any vehicle deemed to have been “illegally” exported since 1987. Based on the UNESCO convention in trafficking of illicit cultural property, the proposed legislation would include any vehicle designed by an Australian, built in Australia, altered in Australia, or strongly associated with an Australian. To quote from the proposed legislation, “the best way of promoting the regime would be a couple of high profile actions for the seizure and return of forfeit cultural material”. If you have a car with a significant Australia history, be nervous.

All of this should be a warning of future potential problems for the collector car community. If there’s a way to go overboard on regulations, the government, any government, seems to find a way to make life overtly complicated. While Australia is currently the epicenter of Monty-Pythonesque import (and export) restrictions, others will follow. China, for instance, simply forbids the import of classic cars, Norway wants to eliminate ALL (new and used) gas and diesel powered cars by 2025, while India and Germany want to eliminate all new gas and diesel cars by 2030 and France by 2040. Our children will live in a very different world.