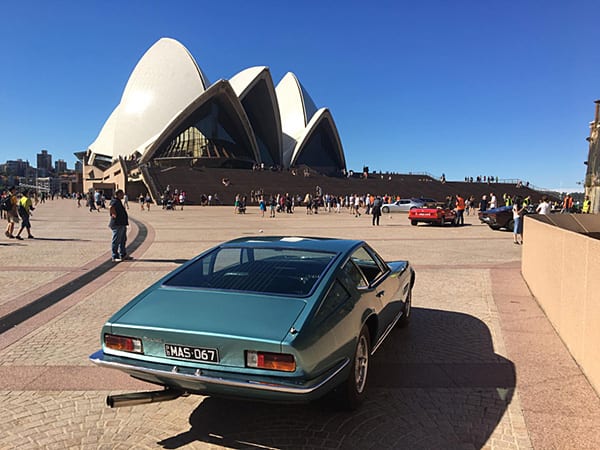 Readers of this column might remember “Australia, Asbestos and Collector Cars” from July 15th of last year, click here for the link. That column explained that in 2003 the Australian government issued a zero-tolerance ban on any-and-all asbestos products. This was aimed primarily at new cars built by the Chinese Great Wall car company which, despite claims to be asbestos free did indeed contain asbestos. Fast forward to March 6th 2018 when, without prior warning to Shipping and Customs agents, let alone to car owners, the Australian Border Force (ABF) began randomly (make that very randomly) testing imported collector cars for asbestos, without any procedures or practices on just how that could or would be done.

Two years in the planning
Now flash back two years to John Gove, President of the Maserati Owners Club of Australia, who had travelled to various Maserati rallies in Europe and the US. These tours inspired him to hold an international Maserati Club Gathering in Australia. Eager to showcase their newly released V6 bi-turbo powered Levante S SUV and Ghibli S sedan, Maserati of Australia and the Maserati factory sanctioned the event. With factory support it was decided to go global. Invitations went out to Maserati clubs across the world.

Being all too familiar with the capriciousness of the ABF, and despite recent statements on the ABF website, the Rally organizers had contacted the office of the Honorable Michaela Cash, the Minister responsible for granting an exemption from ABF inspection. The organizers argued that the overseas-based Maseratis that were invited were fully restored, were asbestos free, were coming for a single short-term visit and would be exported via Sydney at the end of the trip. Whilst they were given verbal assurances, during the paperwork process Michaela Cash changed positions, and so the organizers did not receive a confirmation of exemption from Asbestos Testing in writing. Despite positive verbal assurances from the previous Minister Cash’s office, only two weeks before the cars arrived the Honorable Craig Laundy, the newly-appointed Minister for Small and Family Business replied that a one-time, two-week exemption from asbestos inspections would not be granted for cars entering Australia on temporary import carnets.

The rally attracted about forty overseas enthusiasts from eight countries, including England, Italy, Norway, France, Switzerland, South Africa, New Zealand and the US. Another sixty Australian Maserati club members and Maserati executives joined the tour which started in Melbourne on March 20th. The five-day 1,500 km tour featured fifty Maseratis which toured Victoria’s countryside, historic Gold Rush towns, the Woomargama sheep station and then up and over the Snowy Mountains to Sydney, ending at the Sydney Opera House on March 26.

The department of no
The ship bringing eight of the cars was due to arrive in Melbourne on March 3rd but as all-too-often happens; the ship was late, arriving on March 10th. The shipment of eight Maseratis from England was nabbed for asbestos inspection. Interestingly two of the eight cars were Australian-owned and asbestos-complied cars returning home after restoration in England and several of the eight cars belonged to an ex-pat Australian bringing his cars home for the one-week tour before shipping his car back to England.

The eight cars included a 5000 GT; one-of-two Frua-bodied Quattroportes; a 4.7-liter Bora; two 4.9-liter Ghibli SS coupes; a 2009 Maserati Bellagio Touring fastback; a 4.7-liter Indy and a 4200 Spyder. Having anticipated the potential for mind-numbing problems from the ABF, the owners had collected the supporting restoration paperwork listing the work that had been done and the parts supplied in the process. Alas some of the parts had come from a US supplier whose parts were not confirmed to be asbestos-free and so the cars were refused entry and earmarked for testing.

While two cars, the 2009 Maserati Bellagio Touring Fastback and the 4200 Spyder were released for the event, time quickly ran out for the other six cars and so the owners declined the asbestos inspection process and instead decided to ship the cars out of Melbourne and back to the safety and sanity of England.

They’ll get you coming and going
In the back and forth with the ABF, the owners were also threatened with testing before their cars could be exported, as Australia also deems it illegal to export asbestos products. As a consequence, I was asked to hold the publication of this column until all cars were safely on boats and on their way out of Australia and the capricious clutches of the ABF.

To date the Maserati club gatherings in Europe often pull in a hundred new and vintage Maseratis and hundreds of entrants, booking out hotels, filling restaurants and bringing tourist dollars to the areas they visit. Needless to say this latest inflexibility on the part of ABF will impact both other car clubs looking to host similar events in Australia and any Australian hoping to import a collector car.

An expensive solution
For those daring enough to import a collector car from the US into Australia, Bosskraft, a muscle-car restoration shop based in California and Phoenix and owned by Australian Sean McDonagh, specializes in the removal of asbestos from Mustangs and other collector cars bound for Australia. They advertise that their newest service is the Asbestos Containing Material (ACM) Clearance Service, for cars and other items being imported into Australia. They specifically state on their website do not buy a car with any form of body deadener as it contains asbestos. They can be contacted at http://www.bosskraft.com. While prices will vary wildly from car to car, a $10k asbestos inspection, removal and certification on a $250k Maserati can be justified, but the same $10k certification on a $25k Mustang is hard to justify.

One might surmise that were the asbestos threat so serious, why then do the ABF only order random inspections of very few cars, intercepting perhaps 1 out of 50 classic car imports, thus allowing the other 49 cars to pass unimpeded through the net? On the basis of past inspections, why are they still randomly allowing the importation of various models of classic cars which have already returned positive asbestos tests in areas other than the above mentioned brakes, etc. into Australia? Further, why does the ABF allow 24,000 Chinese built Great Wall & Chery motor cars already imported into Australia and found to have asbestos to remain in Australia fitted only with a warning sticker? Owners were advised by letter of the problem and sent a copy of a risk assessment commissioned by Ateco Automotive Importers from consultants in occupational health and safety, Hibbs and Associates, concluding that there are “negligible” asbestos risks to either owners or mechanics working on the car.

It must be pointed out that when a number of Australian Classic Car Dealers and Owners were invited to appear on a Victorian ABC radio show with commentator & classic car owner Jon Faine on March 23rd, all declined to be interviewed due to fear of repercussions from the ABF on their businesses or future imports. The interview went ahead with an International UK Maserati Club visitor who left Australia with a unique view of Australian political correctness.

In the recent past there have been International gatherings for vintage Bentleys and Bugattis in Australia, however given the outcome of this Maserati gathering, it is unlikely these events will return to Australia. Given the challenges presented by Australia’s Luxury Car Taxes and Random Asbestos inspections, many of the dealers and owners I communicated with believe that the Australian classic car clubs, classic car dealers, owners and enthusiasts need a representative body that speaks for the industry. That body could point out the skills, training, jobs and taxes that the collector car industry contributes to the Australian economy while representing its interests from badly thought out legislation such as Asbestos & Luxury Car Taxes.

The only way a bureaucrat can get in trouble is by saying yes, so no becomes the default answer. I’m the first to agree that controlling asbestos imports and exports is environmentally sound thinking, but the ABF has implemented their regulations without a clear set of rules for compliance. Further, the ABF clearly thinks in terms of black or white, there is no compromise or flexibility in their enforcement. However, in the power vs. money conundrum, bureaucrats can completely miss the commerce, tourism business and tax income aspects of collectable cars.

While Australia is currently the epicenter of Monty-Pythonesque import (and export) restrictions, others will follow. With clear and consistent guidelines from ABF this problem could just become another defined procedural requirement. Importers would have to sharpen up their paperwork and specialist certifiers will be presented with a new business opportunity; much a Sean McDonagh has done with his Mustang business. The goal of writing columns such as this is to explain a problem and offer a satisfactory solution, at the moment there is no “happy ending” in dealing with the ABF!

Thanks to those Australian dealers and automotive journalists who contributed to this column.