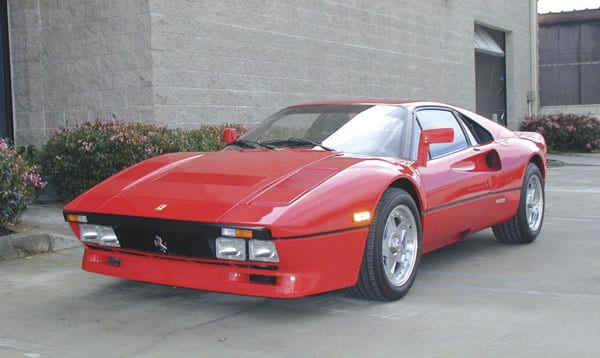 One doesn’t have to be Fed czar Ben Bernanke’s tennis partner to know the world’s economic markets are volatile, but how does that relate to the present and future Ferrari market?

As aspiring Ferrari-socio-economists, we always look at the past to gaze into the future. Let’s begin with the first fuel crisis of late 1973. As a gallon of gas went from $.33 to $1, exotic cars went from being desirable to just “Who cares?” stupid. Near-new Daytonas, Dinos, and Miuras cluttered Southern California used car lots with Daytonas priced at $15,000 and Dinos at half that.

But all cycles end; consumers grew comfortable with $1 gas, and from 1975-79, America’s economy and real estate markets boomed and inflation soared. The Ferrari market rallied and in only five years, from 1975 to 1979, that $15,000 Daytona became a $75,000 Daytona, a 400% run-up. In August 1979, party-crasher Paul Volcker became the Fed Chairman, cranking interest rates to 21%, killing inflation, the economy, the real estate market, and the Ferrari market.

When Volcker eased interest rates in the early/mid 1980s, the $15,000 Daytona of 1975 that had become the $75,000 Daytona of 1979 was now the $50,000 Daytona of 1985. But as interest rates dropped, money markets stabilized, liquidity returned, the economy again took off in 1985, and Baby Boomers celebrated their big “Four-O” with a buying binge. When the Japanese came to the party in 1986—with all their money extracted from their inflated real estate values—Ferrari prices spiraled upward. By the end of 1989, a nice Daytona had reached $500,000, a run-up approaching 1,000% over five years.

What went wrong?
The 1985-89 boom was built on what was, in hindsight, faulty economics. The Bank of Japan’s interest rates were at a ridiculously low 2%-3% and massive liquidity flooded the Japanese market. If a Japanese had a pulse and a piece of property, he could borrow staggering amounts of money, with the Japanese banks offering an unbelievable 115% financing against the appraised value of real estate. As the yen strengthened from about 300 to the dollar in 1985 to about 150 to the dollar by 1989, anything outside Japan was half-price. Because of this perceived wealth, the Japanese became major players in high-end markets they knew nothing about, including real estate (Japanese investors purchased Pebble Beach and the Rockefeller Center) and exotic cars.

While most people would guess the Ferrari market would be hard hit by the dip in the Dow, the opposite happened. Investors transferred money from the stock market into collectibles such as art, real estate, and autos, and so the Ferrari market kept climbing through late 1987 and 1988 to the end of 1989.

As other stock markets headed down, the Japanese Nikkei index kept rising through 1988 and 1989, reaching a peak of 38,915.87 on December 29, 1989. While Americans and Europeans had started to pull back from the Ferrari market, the Japanese were very aggressive buyers, driving the market upward. The crash of the Nikkei index over the next 18 months, coupled with the following implosion of the Japanese real estate market, brought everything to a halt by 1992.

An even wilder example of Japanese market excess is 330 GTO s/n 4561, a special 4.0-liter GTO built to the order of Michel Paul-Cavallier. At the peak of Japanese madness in January 1990, Bert Steiger, a Swiss collector, purchased 330 GTO s/n 4561 for $17 million and sold it to Mitsubishi Bank, which had jumped into the exotic car market. Mitsubishi bank backed out, Steiger was stuck, and when everything collapsed, s/n 4561 was finally sold to another Swiss, and SCMer, for 5 million Swiss francs, or about $3.2 million. Because this 330 GTO has no race history, it would probably bring about $12 million today, well below the $17 million of 1990.

Where do we go from here?
The Ferrari market has been in a slow but steady climb from 1995 to today, and 250 GTO and other supercar prices are now back at 1989 levels of $12m-$15 million and beyond.

The Ferrari market’s growth over the last ten years has been orderly and predictable, and while the Japanese have long since left the party, a whole new group of buyers from China, Russia, Southeast Asia, and the Middle East are becoming market-makers, and they will buy more as the planet’s supply of multi-millionaires and billionaires grows.

Unlike any other manufacturer, Ferrari has had a proven record of almost 60 years of international racing success with wins and Championships in Formula One, GT racing and Sports Prototypes, all the while building the ultimate transportation for those both sporting and wealthy. Classic and collectible Ferraris offer an inherent value based on the same essential economic fundamentals that have governed market values from the dawn of civilization—decades of championship wins, decades of celebrity ownership, famous coachbuilders, leading-edge technological sophistication, and international recognition as the automotive icon of the 20th century.

I’ve said it before, but here is my philosophy again when it comes to exotic cars: Life is short, live your dreams, buy the Ferrari you always wanted, and if it goes up in value, even better.