“Barn Find” Ferraris can Die in Their Sleep 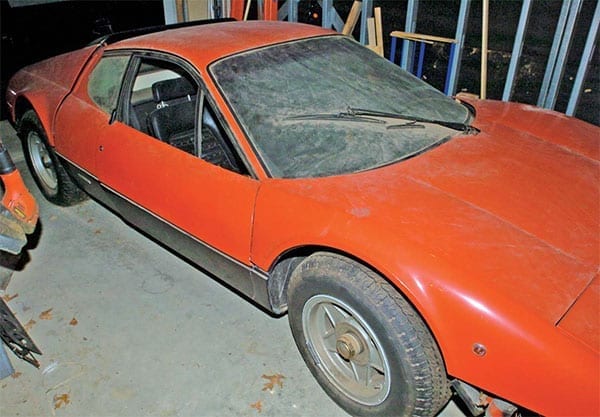 “Barn Find” Ferraris can Die in Their Sleep

I get frequent calls from potential Daytona buyers looking for an ultra-low mileage example with the mistaken belief that they will be getting a “new” time-capsule Ferrari.

Unfortunately, what usually happens in such cases is not the raising of Lazarus—it’s more like the curse of the mummy.

A hypothetical 5,000-mile 1969–74 Daytona attracts a group of Ferraristi with odometer fetishes, but it’s a whole lot cheaper just to buy a low-mileage odometer for your desk.

The good news, if you find such a car, is that the books, tools, and documentation will probably be there and good for a lot of one-upmanship.

The bad news is that only a handful of ultra-low-mileage Daytona-era Ferraris have been preserved properly and serviced as needed over the years.

Any Ferrari that’s 30-plus years old with low miles has probably sat untouched for years, and that typically destroys the engine from the inside out. The car was probably pulled into the garage, shut off, and the owner closed the garage door and walked away. The battery died, the fuel turned to varnish, rust formed on the cylinder walls, and the rings froze to the cylinders. Then rust attacked the valve faces and seats so that when sleeping beauty is brought back to life, she’s ugly to the bone.

DYING A SLOW DEATH
As engines suffer a slow death from sitting, so do carburetors and transmissions, transaxles, suspension components, brakes, a/c and heating and defroster systems. Heater control cables freeze and heater valves seize solid. The a/c lines deteriorate and the brake reservoirs vent to the air, initiating death by freezing the brake calipers.

Every shop has horror stories of transaxles and differentials in which the lower part of the gear set or ring and pinion was immersed in oil while the upper half was exposed to air vented into the casing. Such improper storage leads to condensation and death by rust.

Regardless of whether a Daytona had 5,000 miles or 50,000 miles, rust never sleeps: If door skins haven’t been replaced, they will need to be. Rust also attacks the inner panels of the rockers, rear wheel wells, and the trunk floor.

Time is hard on rubber, so suspension fittings and bushings, seals, and gaskets will be shrunken, cracked, or hard. Cadmium suspension platings will be well past their due date, regardless of miles.

WHY DAYTONAS AGE FAST
While a Daytona is probably good for 100,000 miles, they never get there and almost always require rebuilds because of old age. Just one example of the time and age problems is the large 20-quart dry-sump system, which hardly ever gets hot. There are multiple ingredients in gasoline and the boiling point of gasoline starts somewhere north of 168 degrees.

Carburetors and cold engines dump raw fuel past the rings into the oil system, and unless the oil is heated to well over 168 degrees for an extended period of time, fuel contaminants will not boil out of the oil; condensation, acids and other corruptors will shorten engine life.

Expect the same issues with a 365 BB or 512 BB and BBi (1974–84)—plus the dreaded every-five-year belt replacements. In addition, poor federalization work to meet EPA and DOT standards must often be redone properly.

SOLVING THE PROBLEM
If “pickled” properly with a good lubricant in the cylinders, an engine can sit for years, but even so, gaskets dry up and deteriorate, while rubber seals harden and valve springs lose their tension. Engines should be turned over monthly to cycle the valve springs and move the rings.

A short-term solution comes from NAPA auto part stores which offer a fogging motor storage oil designed for construction, farm, and lawn-maintenance equipment. The oil is sprayed directly into the carburetor or fuel injection system while the engine is running.

Thanks to a high “cling” factor, the heavy oil coats the cylinder walls and valves, but fouls the plugs. As the engine slows down from fouled plugs and oil buildup, it can be shut off for a protected winter’s sleep.

Remember to leave the battery on a long-term trickle charger, clean the plugs, and periodically start your sleeping beauty. The car should be driven at least 30 miles or 45 minutes every three months so that fluids get up to temperature and all moving parts are exercised and lubricated. Dry, humidity-controlled storage in a state such as California or Arizona is best.

Last but not least, if the car has drivability problems during its once-every-three-months exercise program, it needs to go in for service, just as if it were driven regularly.

Dad’s Buick would go 150,000 plus miles with minimal service and little attention because it was driven almost every day. The seals never dried out and the rings never stuck from sitting. And Dad’s Buick never had to go through starting up cold and being taken out for a hard run—treatment that almost every Daytona suffers throughout its life.

Regardless of whether your prospective Daytona, 512 BB, or a 550 has 5,000 miles or 50,000 miles, before you pull out your checkbook make a detailed pre-purchase inspection with a compression and leak-down check. It’s the cheapest way to trouble-free driving.

Appearance, noises, smells, service records, and log books are meaningless without such an inspection and you won’t get that at auction as cars run by every few minutes. It’s not the miles that count, it’s the condition.