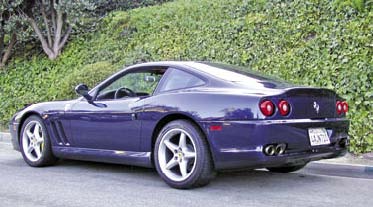 Answering daily phone calls and emails provides a never-ending supply of topics on which to pontificate. The “real-world” cost to drive a late model Ferrari is one of the more frequent questions I’m asked.

I recently sold an unusually well-documented 1998 550 Maranello, S/N 111317, with 36,200 miles to a client in the jet aircraft industry, and comparisons between Ferrari and jet costs inspired this column. Like a private jet that requires three to four hours of maintenance for every hour of flight time, Ferraris are not cheap to own.

FIRST TWO YEARS ALMOST FREE
550 Ferrari S/N 111317 was sold new on March 19, 1998, at $225,000, to a wealthy Santa Monica real estate investor and used for weekend retreats to his ranch in Ojai, a 150-plus-mile round trip. Thanks to an unlimited mileage warranty, the first two years were relatively expense free.

As 2001 rolled around, in January, at 18,124 miles, two ball joints and sway bar bushings were replaced at $253.47, a standard procedure for a heavy, high performance, front-engined car with power steering. Three months later, in April, at 18,998 miles, a coolant leak, new front tires, another repaint of the wheels, and a detail added $2,718 to the ongoing maintenance bill.

Cheaper than a jet, but more than a Jetta
Four months and 2,657 miles later, in September, at 25,607 miles, the steering box, power steering rack, and rear shocks were replaced, and the wheels were aligned for $8,641.69. The year ended at 26,236 miles, with a compression and leakdown problem discovered in late December at the 30,000-mile service. New cam belts, engine mounts, and a valve job followed, with all 24 valves and valve guides replaced at $7,954.66. Fortunately for the owner, Ferrari supplied the valves and guides under an extended warranty. Another year, another 4,878 miles, adding up to $18,450.64, or $3.78 a mile.

TOYOTA MONEY: 37 CENTS PER MILE
The Ferrari gods were smiling in 2003, with only 672 miles added and one service for hood shocks, in March, at 26,908 miles. Cost of ownership was only $249.38. Little use means no visits to ever-vigilant Ferrari mechanics, who point out problems that need to be resolved. This year cost Toyota money—just 37 cents per mile. Of course, there weren’t many miles driven either.

In late December 2004, Ferrari 550 S/N 111317 moved on to her second owner, for $90,000, and no service bills were added to the year. A real estate investor and self-confessed “Porsche guy,” the second owner had always wanted a Ferrari and bought the 550 simply because he knew the car through the original owner.

Only weeks into Ferrari ownership, in January 2005, at 32,945 miles, a 30,000-mile service was again done, under the “while-you’re-at-it” theory, because of oil leaks. The front shocks were also replaced, at $6,196.57. Only weeks later, the second owner also had the nose repainted, and his 550 “personalized” with the front fenders modified for fender shields and the calipers redone in yellow, at $7,759.70.

In August 2006, our subject 550 was again sold for $90,000, with 36,196 miles, to the third owner, the president of a corporate jet maintenance and sales company. During the pre-purchase, an oil leak was found, and while the estimate was $3,000, the final bill was $1,582.58. The third owner appreciated the subtle lines and wanted a user-friendly Ferrari that could be driven daily in New York weather and traffic.

A long-time Ferrari owner, he appreciated that virtually all of the depreciation was reflected in the purchase price and that at 36,000 miles, adding mileage wouldn’t kill the value. His last toy was a new Porsche Turbo at $160,000, and while it had been nice to order a car exactly as he wanted, the depreciation wasn’t worth the thrill when he sold it after three years for $95,000.

Ferrari ownership is both a lifestyle and a socio-economic statement, just as owning a polo pony is a different venture than keeping a draught horse. As one former owner of S/N 111317 put it, “I spend more than that on crap on eBay every year.” No other statement quite sums up the difference between those who lust for a Ferrari from those who can pay the price of ownership.