Cheap but not Inexpensive 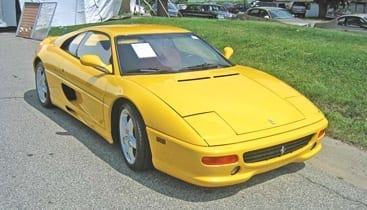 Cheap but not Inexpensive

The last fifteen years have been the best ever for new Ferrari sales, which means that the number of late-model used Ferraris on the market has also never been larger. The allure of getting a $100,000 or more discount on a Ferrari that is only a few years old is nearly irresistable, but the magnificent performance of these cars comes partly through their complexity, and with complexity comes cost. Remember, even though the market value of a 348 or 456 is in decline, the maintenance costs stay the same, or even increase, as the miles and years accumulate.

Below are a few quick tips on what to look for, and what to avoid, when shopping for a horsie that’s been around the block a time or two.

V8 GUIDELINES
348: Insist on a Stack of Receipts

“Magnum, P.I.“ made the Ferrari 308/328 instantly recognizable, but by 1989, the design was aging. Its replacment, the 348, boasts modern electronics, adequate a/c and world-class performance, but initially electronics were a nightmare, with defective ECUs, over-taxed alternators, and recalcitrant starters. Early cars had a weak transaxle, requiring three major gearbox updates.

The 348 flywheel has 30 parts, including springs and washers packed in grease to dampen the engine’s harmonic vibrations, a nightmare to disassemble. A clutch job can be expensive; a new flywheel costs $3,200, a double-disc clutch $1,800, and a throw-out bearing is $600, plus labor.

Early targa-tops had leaky front top seals that improved marginally through continual factory updates while all 1989–93 348s had rear suspension geometry that would go into snap oversteer, a problem cured in 1994.

While the engine is sound, the 348 is the only Ferrari with a single serpentine cam timing belt, further complicated by a weak (or overworked) water pump and a belt tensioner bearing. The long belt also makes degreeing the cams complicated. Major service is an engine-out operation, starting at $7,000.

The 348 Spyder introduced in 1994 had more leg room, an improved 2.7 Motronic engine system, thicker castings on the rear wheels—giving two inches of rear track offset—and improved high speed stability. An after-market computer chip and Tubi exhaust will give 340 hp, offering cheap performance —at least in the Ferrari world. When 348 shopping, run fast from any car which hints at deferred maintenance.

The new, five-valve 355 series was offered from 1995 to 1999. It was a vast improvement, though teething troubles were extensive. In mid-1998, the 355 became the first road car to feature an F1 shifter, but early models suffer high-pressure pump and selector problems. If the parts can be found, expect to spend about $11,000 if you need to repair yours.

The 355 Spyder power top can be a problem, since the windows must automatically drop, the seats must move forward, the car must be in neutral, the doors must be closed and the emergency brake must be on for it to work. If you’re over 6′2″ you may find yourself impaled on the steering wheel as the seat goes forward. Top problems can easily run up a long-out-of-warranty $5,000 repair bill.

355s often have faulty exhaust manifolds and valve guides that wear rapidly. An exhaust manifold replacement costs $3,000, plus $1,000 labor. But drive your 355 with a lean cylinder and you can face a $25,000 engine meltdown. Major engine work requires an engine-out service, which starts at $5,000.

The 360 Berlinetta was introduced in 1999 as the first V8 Ferrari with a three-year warranty, an indication of Ferrari’s faith in it. The 360 is a modern supercar with torque and power, improved braking, handling, and more interior room. Introduced in 2001, the 360 Spyder’s top comes from the company that makes Mercedes and BMW tops.

Breaking with tradition, the 360 can be serviced with the engine in place, thanks to a removable panel behind the seats. Early Spyders had to have the top mechanism removed for engine access, a problem resolved by cutting access holes behind the seats.

In the last few years, the price gap has widened between high-mileage, older V8 Ferraris and new, low mileage examples. By the way, shop very carefully on eBay, as it seems to be the sales point of last resort for questionable Ferraris. Here are some average V8 prices:

The Ferrari 456 GT was introduced to the U.S. in 1994 by Ferrari as a replacement for the 365 GTC/4, the comfort-focused sister car to the Daytona. The 456M was introduced in March 1998 at the Geneva Salon with a reprofiled grille, carbon-fiber hood, redesigned seats, and new dash.

Early 456 and 550s ran too much oil pressure and can blow the oil filter apart, creating a major mess or a blown engine. The solution is simple: An hour’s labor to remove a few spacers will drop the oil pressure to acceptable levels.

The circlip holding reverse gear to the gear cluster can fail; if your 456 or 550 pops out of reverse, truck it to your Ferrari service center and have the transaxle repaired for about $3,500. Drive with the transaxle making ominous sounds and you’re looking at $7,500, after the reverse gear has bounced around in the transaxle.

Early 456 door windows didn’t seal against the rear quarter window, a problem resolved with the 456 M. Leaky self-leveling rear shocks can be a $2,000 problem on all 456s. Early 550s also had a wheel recall. Compression and leakdown checks on low mileage 456 and 550 Ferraris often find problems with poor ring seating or leaky valve seats. If the compression is weak, pass. Cam and front seals can leak after about 10,000 miles, so most owners simply go straight to the 30,000-mile service for about $3,500 and repeat it every 10,000 to 15,000 miles.

2002’s new 575 featured a sophisticated F1 transmission and the skyhook electronic shock system that instantly adjusts to conditions. Weight was reduced, bigger Brembo cross-drilled and lightweight wheels were added and 5.75 liters gave a 203-mph top speed, making the 575 the first front-engine Ferrari production car to top 200 mph. But the early skyhook suspension caused the front end to lift on acceleration, or porpoise. The solution is the stiffer Fiorano suspension package, which has bigger Brembo brakes—that squealed like a stuck pig until brake pads were improved.

Again, the price gap between an earlier high-mile model and a low-mile example continues to widen. Here are some guidelines.:

All these used cars give staggering performance at today’s depreciated prices, and the newer the Ferrari, the fewer the problems. But don’t fool yourself—owning a Ferrari is the equivalent of having a four-wheeled polo pony, and you don’t even want to know what that will cost you. In fact, if you have to ask, just skip to the “Affordable Classic“ in this issue and don’t look back until you win the lottery.