Choosing a Gullwing or a Ferrari 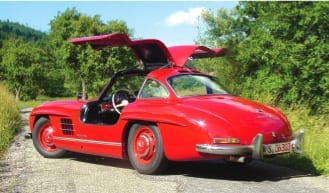 Choosing a Gullwing or a Ferrari

If you’ve got $300,000 burning a hole in your pocket and are thinking about turning it into a vintage car to have some fun with, you’ll have a variety of Ferraris to choose from. But if your taste leans towards sauerbrauten and braunschweiger, there is only the 300SL.

Whereas Ferrari has constantly developed its line of race-oriented cars, Mercedes took a very long sojurn from the supercar market after production of the Gullwing ceased in 1957. If you’re trying to decide between an early Ferrari and a Gullwing, here are some things to keep in mind.

IN COMPETITION — Introduced in 1952 as a series of nine racing prototypes known as type W194, the Gullwing featured an alloy body on a lightweight, triangulated multi-tube chassis. The cars were fitted with an inline six-cylinder engine, a full synchromesh gearbox, and an independent suspension that was adjustable in the front. The design was a winner from the start, with factory Gullwings finishing first and second at both Le Mans and in the Carrera Pan-America that year. (Mercedes actually lowered engine compression for Le Mans, understanding that to finish first you must first finish.)

In the 1952 Mille Miglia, a Gullwing finished second to a Ferrari 250 Sport Vignale coupe (S/N 0156 ET, and the first of a long line of 250 Ferrari racers). The Ferrari victory was in large part due to driver Giovanni Bracco’s bravery behind the wheel and knowledge of the 1,000-mile route. With its solid rear axle, a crash-box transmission, and a transverse leaf spring front suspension, the Ferrari certainly did not win based on its technical superiority.

Driving techniques for the Gullwing and the transverse-front-leafspring Ferrari differed as greatly as their technical specifications. The Gullwing’s rear swing-axle means that braking must be done in a straight line, and once the car is turned into the corner, it’s necessary to get on the gas to keep the weight transferred to the rear and the tires stuck to the track. Lift and you’re sure to lose it.

The Ferraris have a different set of demons, as castor, camber and toe all change as the suspension compresses and rebounds, so the cars understeer like pigs. That makes it necessary to trail brake the Ferrari in an attempt to transfer as much weight to the front suspension as possible, hit the apex late, and then get back on the gas to drift the car out to the exit.

I once owned, restored and raced 340 America S/N 082 A, Luigi Villoresi’s 1951 Mille Miglia-winner. My hat is off to anyone who was daring enough to get behind the wheel of a Ferrari race car in the early ’50s, as that 340 America was unquestionably the most evil-handling race car I have ever owned or driven.

ON THE STREET — In 1953 Mercedes canceled the W194 racing program to focus on building an all-new open wheel Grand Prix car for the 1954 season. To help pay the racing bills, Mercedes decided to produce a road-going version of the Gullwing. A single prototype was built, and production began in 1954. Propelled by a Bosch-injected, 3–liter inline six, putting out 240 hp at 6,100 rpm, and with a top speed of 165 mph and a 0–60 time of 9.0 seconds, the production 300SL was arguably the first supercar.

In Maranello, it would be two years before Ferrari would build a car that compared. The Boano, introduced at the Geneva Motor show in 1956, featured an independent coil spring front suspension that cured much of the ever-changing castor and camber problem. Add in a fully synchronized transmission, large drum brakes, much-improved driver comfort, and the fast-evolving 250 V12, and this was a giant evolutionary leap for Ferrari. This user-friendly, dual-purpose GT/race car was equal to the Gullwing in technology and performance. While almost 200 minor upgrades and changes were made over the Gullwing’s four-year production run, the basic design remained unchanged, and Ferrari was able to catch up.

For the serious racer, Ferrari definitively surpassed the Gullwing with the introduction of the all conquering 250 TDF.

THE MARKET — The Gullwing was a collectible car from the start, though values have tended to appreciate slowly and steadily, unlike the peaks and valleys of the Ferrari market. Today, a “barn find” Gullwing might be $125k while the best-of-the-best might bring $450k. A nice older restoration is in the $300k range while a driver is $200k. The comparable needs-everything 250 Boano would cost about $125k, a great one is around $300k, an older restoration should run about $250k, and drivers can be had for about $200k.

Once properly set up, and with oil changes done on a regular basis to avoid the common problem of fuel contamination, a Gullwing can provide reliable transportation for years. Parts are available, and there are several places to get your car serviced.

To put a Gullwing-beating 250 TDF in your garage will set you back over a million bucks, be harder to maintain, and fussier to live with. It is an Italian car, after all. In the $300,000 range for an old V12, the pickings have become mighty slim. A great Lusso would be a good choice, even though it is from a later era, as would a 275 GTB/2 shortnose. While not as trouble-free as a Gullwing might be, both offer sterling performance and visual panache.

Frankly, the choice comes down as much to your temperament as it does to the car. If you like your life filled with quiet predictability, the Gullwing is your choice. If your management style leads towards the chaos theory, a Ferrari will suit you better.

However, when you are choosing between a Gullwing, a Lusso and a GTB, it’s pretty hard to go wrong no matter what your decision is.