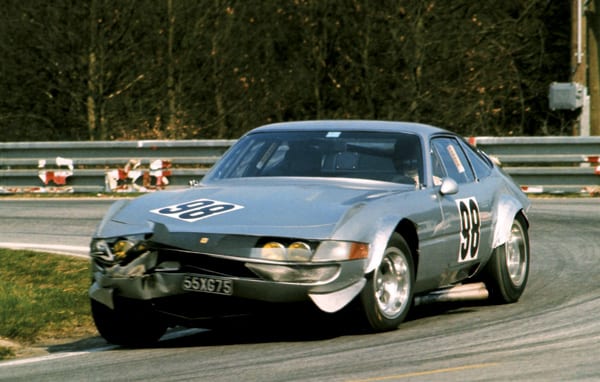 From the beginning of the Ferrari Classiche Program in 2003, there has been no lack of enthusiasts who dismissed it for its rigid limitations. The raison d’etre of the FCP has been to “certify the authenticity” or originality of Ferraris, but not necessarily to certify that a Ferrari is “genuine.” As an example of this study in Italian semantics, a Ferrari could leave the factory as a street or race car and later be modified as a race car through its racing career. So it is a genuine Ferrari. But it is not an authentic or original Ferrari, as last delivered by Ferrari, and so cannot be “certified” under the Classiche program. Further complicating the situation, if a car went back to the factory for updates in period, it is only genuine as last delivered by the factory, regardless of its race history in its initial iteration.

The poster child for what was wrong
The usual poster child for those anti-Classichisti is 250 SWB s/n 2819, modified and raced as the Breadvan. Under the existing fatwa, the Breadvan may be genuine and may have a well-documented period race history (witness Le Mans, 1962, DNF) in its much modified form, but the Breadvan could not be certified under the Classiche rules because its authenticity is too far removed from the build spec. on the day it left the factory (as a Scaglietti-bodied 250 SWB.)

It must be pointed out that because of the new-found influence of Ferrari’s Classiche department, the International Advisory Counsel for the Preservation of Ferrari Automobiles (IAC/PFA), which governs the judging rules at Pebble Beach, Cavallino, the Ferrari Club of America National Meet, and indeed, every FOC and FCA concours in North America, would not allow the Breadvan an entry. No approval of the Classiche department for this “modificato.”

Think of it as “Classiche lite”
In June 2009, Ferrari Classiche announced they would issue an “Attestation for Vehicles of Historical Interest” for Ferraris that were modified after leaving the factory gates for racing or the show circuit. As per Ferrari’s literature, “This Attestation for vehicles of historic interest… is issued to Prancing Horse cars which, although they do not fully comply with the strict Ferrari Authenticity Certification criteria, have: competed in and around the time of their construction in national and international competitions in their current configuration, OR: have a current configuration that is the result of modifications made by internationally renowned designers/coachbuilders within ten years of their construction and have participated in the aforementioned configuration in internationally recognized shows or concours d’elegance, or have been featured in leading automotive publications.”

In an interview by Nathan Beehl with Marco Arrighi, head of the Ferrari Classiche Department, in the November 28, 2008, issue of the Ferrari Market Letter, Arrighi outlined the basic requirements (edited below for brevity) for a Ferrari to be accepted into the Attestation for Vehicles of Historic Interest.

We revisit the poster child
Just as this I have used the Breadvan as the poster child in this context, Marco Arrighi did the same, saying the Breadvan is not eligible for the Classiche program because it was sold by Ferrari as a 250 GT SWB. While that conversation was not continued, the implication was that the Breadvan would be eligible for the Attestation program. Indeed, I contacted the owner of the Breadvan, who confirmed he was “in discussion” with Ferrari. Further, in speaking with the powers that be at Pebble Beach, the once-rejected Breadvan might now be welcomed on the lawn if certified through the Attestation program.

Someone has to be first
The first car to meet the Attestation criteria was 275 GTB/C s/n 7545, one of only eleven factory-built 1965 Cliente Competizione race cars, which was certified so it could be offered at RM’s 2009 Ferrari Leggenda e Passione auction in Maranello, Italy. The car was not Classiche certifiable as raced in period in Australia because it raced without bumpers and with non-original fog lights, but it was acceptable for the Attestation program.

I own 365 GTB/4 s/n 14049, a street-model Euro-spec Daytona, sold new in 1971 by French dealer Pozzi to Philippe Cornet-Epinat. In 1972, it was race-prepared by Pozzi and raced that March by Cornet-Epinat in the 4 Hours of Le Mans with race #98, finishing 8th overall and 6th in class. No one cared about beat-up race cars in the mid-late-1970s, so a badly battered s/n 14049 was sold off to Italy and became a Daytona Spyder conversion until I tracked it down. The car has now been restored to Le Mans specs by Wayne Obry’s Motion Products. It will be submitted to the Attestation program in the next 30 days. This first-hand introduction to the Attestation program will almost certainly be the subject for an upcoming column.

Where do we go from here?
When announced in November 2009, the Attestation program would have allowed holders to race in the Shell Historic Challenge and other classic car events organized by Ferrari, while also giving credibility (and value) to other Ferraris with status similar to the Breadvan. With the cancellation of the Historic Challenge, the need for the Attestation to go racing has become a moot point. Dave Seibert, who ran the Historic Challenge in North America from the beginning, has now organized similar races at Le Belle Macchine d’Italia in June.

That event, announced as the first of a possible series, is open to a variety of race cars of the period, but is clearly built around the drivers from the Shell series. The Attestation isn’t needed here (nor, for that matter, is a Certificate of Authenticity, or FIA or FIVA form); Dave and his staff are approving entries based on their own knowledge and records. My Daytona mentioned above is eligible, but getting the “thumbs up” took about three minutes, not the three to six months and the $3,000 to $10,000 fee needed for the Attestation program.

At this time it seems that just over 1,500 Ferraris have gone through the Classiche program, while less than half a dozen have completed the Attestation program. It is hoped that long-term, the Attestation program will be much more inclusive and bring many significantly historic Ferraris into the program, giving those cars (and their eager owners) a pass to the better grass in Palm Beach and Monterey, and it will allow them to run in the Historic Challenge, if and when that series is officially revived.