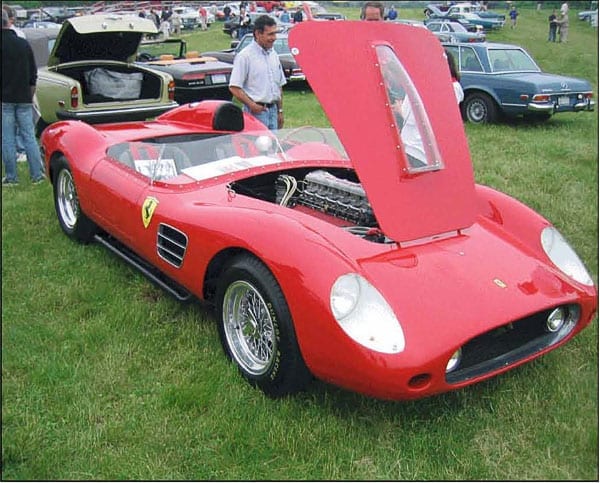 Of the 33 250 TRs originally built by Ferrari, there are at least 46 in existence today. As with Alfa Monzas, Bugatti Grand Prix cars and Jaguar D-types, this TR population explosion is often the creative (and sometimes lucrative) end result of a single crashed or otherwise destroyed car becoming two or more re-created cars, each claiming remnants of the original. One example of this automotive cloning is 250 TR S/N 0720TR, a version of which was offered at the recent Bonhams Auction at Gstaad.

The original 250 TR S/N 0720TR, a standard lef-hand drive, pontoon-fender car, sold new to Luigi Chinetti Motors and then to amateur racer Jim Johnston of Cincinnati, Ohio. It was raced by Johnson in 1958 and ’59, and then sold to Dave Biggs of Clarksville, Missouri, who raced it in the early 1960s. In 1965 this Ferrari was virtually destroyed when lightening struck Biggs’s barn, starting a fire that destroyed the building, an adjoining garage and workshop, and the other cars, including an Alfa 8C 2900, inside.

Now the plot thickens. Some claim that Biggs decided to bulldoze the burned ruins, and buried the debris in a ravine, with the frame eventually ending up under the Forest Park Highway.

Others claim that the remnants of the frame, along with a front suspension, steering and a crankshaft of the Biggs 250 TR were dug up by SCM subscriber Henry Wessels on April 23 and 24, 1987, as he went about finding the chassis and other bits from which the 8C 2900, S/N 412021, could be reborn.

In any case, the Wessels-found Biggs frame and bits were sold to English collector Rodney Felton, who had a complete car recreated by Rod Jolley Coachwork in England. This 250 TR eventually went to Harald and Ingeborg Mergard, a German couple with a substantial Ferrari collection who also sponsor the Barchetta website (http://www.barchetta.cc/All.Ferraris/), a favorite of many Ferrari enthusiasts. For photos of the frame and parts, as recovered, and the Mergard’s version of this saga, the reader is invited to visit http://www.barchetta.cc/english/All.Ferraris/Detail/0720TR.250TR.htm.

But our excitement is just beginning. A second chassis: allegedly also carrying S/N 0720TR, turned up in Italy in 1980. In 1981 the frame, now restored, was sold to Dutch collector Paul Schouwenburg, who spent the 1980s collecting an impressive array of original TR parts for this project. Dutch panel builder Alwin Hietbrink later built a duplicate pontoon-fender body. The car was completed in early 1996 and in December of last year was offered at the Bonhams & Brooks Gstaad sale, carefully described as a “1958-type Ferrari 250 Testa Rossa Reproduction Incorporating many original Components, with Coachwork after Carrozzeria Scaglietti.”

As so often happens when big dollars and big egos are on the line, lawyers soon appeared and the Schouwenburg 250 TR was slammed with an injunction initiated by the Mergards, removed from the sale, and Bonhams was odered to “render pages 124 through 129 of their catalog unreadable.” (Personally, I consider most pages of auction catalogs unreadable anyway.) But now 0720TR, or the replica thereof, is embroiled in yet another exotic car court action, in which only the lawyers will be the victors.

To add further exitement, there are rumors of a third “duplicato” existing in Italy, also carrying S/N 0720TR. A hearing on the Bonhams car is scheduled for the near future, so stay tuned for future developments.

For more information about S/N 0720TR, see Cavallino magazine, #79 (February/March 1994) for Jerry McDermott’s “The Phoenix Testa Rossa,” a detailed and thorough history of the car until that time.—Michael Sheehan