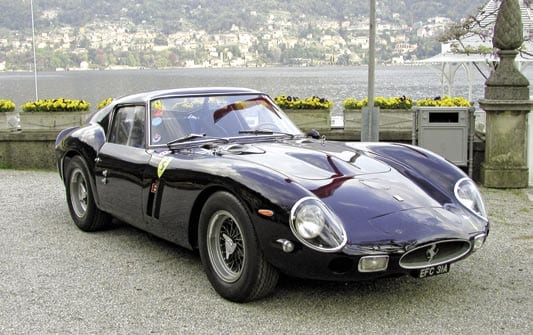 To the aficionado, Ferraris have always been industrial art, the pinnacle of technology and styling of their era. Many of my clients have described their Ferraris as user-friendly interactive art. In the last decade, auctioneers and the collectors have created a new world of art buyers intertwined with Ferrari buyers.

Most auction houses sell art in the form of paintings or sculptures, so they know how the game is played, and many high-end Ferrari collectors are also art collectors. With the sale of the Steve McQueen Lusso at Gooding’s auction at Monterey, at about five times the cost of a “normal” Lusso, some significant Ferraris may have morphed into interactive modern art.

Ferraris down, art up
Relative to the modern art market, Ferraris have been losing the value wars since the crash of the ’90s. At that time 250 GTOs sold for about 25% of the value of the very top paintings, like van Gough’s Sunflowers ($13.75 million against $53.9 million). It has taken seventeen long years for Ferraris to get close to their 1989 market prices, while fine art has spiraled upwards.

One needs only to look at Jeff Koons, the guru of modern American artists or British modern artist Damien Hirst to see how modern art has outpaced Ferraris. As long ago as 1988 Koons created Michael Jackson and Bubbles—claimed to be the world’s largest ceramic—a gold-leaf plated, life-size statue of a seated Jackson cuddling Bubbles, his pet chimpanzee. In 1991 it sold at Sotheby’s New York for $5,600,000, at a time Ferrari prices were plummeting.

Koons was one-upped that same year by Damien Hirst, who created The Physical Impossibility of Death in the Mind of Someone Living consisting of a 14 foot Tiger Shark preserved in a formaldehyde-filled glass tank. Commissioned by British modern art patron Charles Saatchi, it sold in 2004 for $8,000,000.

This sale was followed by Hirst’s sale of Lullaby Spring, a steel medicine chest filled with 6000 painted pills, sold by Sotheby’s London on June 2007 for $19,100,000, making Hirst’s works the most expensive by a living artist. In late August, almost simultaneous with the sale of the Steve McQueen Lusso for $2,310,000, Hirst sold For the Love of God, a platinum cast of a human skull, encrusted with 8,601 diamonds capped off with a pear shaped diamond in the forehead of the skull, for a staggering $100,000,000.

Art auctions versus car auctions
As an example of the gap between art and collector car auctions, the six different Monterey auctions brought in numbers from $500,000 at Kruse, to $61,000,000 at Gooding. The total was $134,839,073 from a combined nine nights of auctions.

Only a tiny portion of the US population—an estimated 0.1%, or less—can play in this stratosphere, yet they still number 300,000 people. If they were so inclined, every one of those people could buy Lullaby Spring, or, for less, a 250 GTO and not blink.

Provenance and sustainability
While the more traditional art market is driven by centuries of philanthropy, collecting and a long history of patronage and appreciation, the modern art market and contemporary collectibles lack the same depth of tradition. I contend that the Ferrari market functions under the same set of rules as classical art—provenance and sustainability.

Which will matter more in 10 years, or 50 years, or 100 years? A 250 GTO, 275 GTB/C, or 365 GTB/4 with a Le Mans, Daytona or Tour de France race history under the NART, Pozzi or Maranello Colors? Will a dead shark in formaldehyde be a massive, Monty Python put-on, like the Emperor’s new clothes, a massive silliness for which someone has paid way too much… or an enduring example of modern art?

You can have both the 250 SWB and the 365 GTB/C for less today than the dead shark which sold for $8,000,000 in 2004. Yet today the shark is certainly worth even more (even though the original shark wasn’t preserved properly, and rotted, so that Hirst had to get a new shark). If the shark were a Ferrari, it’s a rebodied and respined shark, a repli-shark.

So for a Ferrari to be art, is originality the key valuation factor—even at the expense of rendering the machine unusable for its intended purpose? In other words, would the McQueen Lusso have been more collectible had it been unrestored and the new buyer able to sit on the very same leather scratched by McQueen’s denims? What if the Venus de Milo statue were given a new set of arms made up to replace what is missing?

I firmly believe that Brandon Wang’s dead-original 250 GTO s/n 4219 is more a “piece of art” than 250 GTO s/n 3445, which has been rebodied twice, because Pedro Rodriguez actually sat in s/n 4219’s seat and held that very steering wheel. Good original cars are becoming harder to find, cars with race history command greater value than road cars and cars that are virtually untouched are the ones that will become automotive art gallery material—but how many are left?

As for road cars, the premium paid for Garrison’s Daytona Spyder at $2,035,000 wasn’t just the virtue of low mileage but its perfect and original 1973 preservation—just like a nicely preserved Louis XIV piece of furniture. If a collectible Ferrari, or any other marque, is to be considered art, it needs to be an item of historic importance that transcends being a motor car.

A wealthy potential market
Excluding sales of new Ferraris, the buyers in the high-end collector Ferrari market probably total a thousand people. So, logically, Ferrari “penetration” is only 0.3% of our target market of 300,000 multi-millionaires. That leaves a massive potential, if any more could be converted into buyers. With the staggering wealth generated in Asia, Russia and the Middle East, a world awash in petro-dollars and a weak dollar countered by a very strong pound and Euro, it’s not hard to imagine an increase to just 1% or 3,000 people; that’s a threefold increase in demand which can only drive up prices. As just one example of one of those new “outside-the-box” collectors, Indian Beer Magnate Vijay Mallya has quietly built a collection of some 280 cars in India, with some in the US, while also sponsoring Indy cars and buying up the Spyker F1 team.

I suggest that never has so much wealth been in the hands of so few worldwide, although only a small percentage of them are buyers of collector cars, such as Ferraris. As that market grows it will be obvious that the most collectable and historically significant Ferraris are still underpriced in the broadly-defined collector market. Especially when compared with modern art such as statues of Michael Jackson and a chimp, or a stuffed shark or a diamond encrusted skull. Global media/market awareness will continue to propel Ferraris of significance to the apex of the classic car world, perhaps closing the gap with modern art values, although in the longer term both will always be at a discount to the traditional classical art.

(My thanks to Michael Lynch, Anthony Moody and Andrew Turner for their thoughts.)