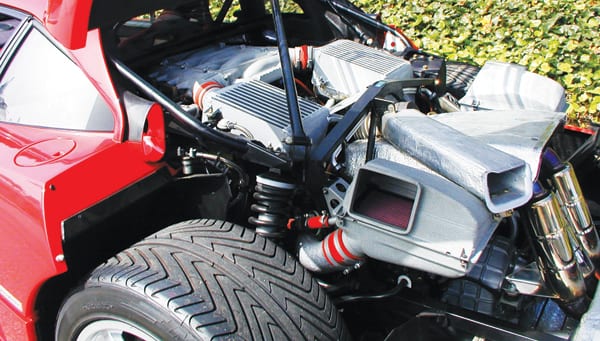 In my October column, I wrote that the factory laptop used to diagnose electrical and mechanical systems of modern Ferraris does not give definitive answers to problems. Instead, the computer merely gives a list of as many as 1,500 options and possibilities.

To understand how this situation came about, let’s begin with a brief history lesson.

While Swedish engineer Jonas Hesselman developed mechanical fuel injection in 1925, nothing inspires industrial progress like a world war. So, fuel injection systems were greatly improved for use on aircraft engines and tanks in World War II.

Mercedes-Benz has used mechanical fuel injection since the 1950s, but the computer age changed the rules, and the first low-cost production car with fuel injection and a basic, on-board computer was the Volkswagen Type 3 in 1969.

By 1975, the Datsun 280Z had an on-board computer that helped make fuel injection adjustments. By 1980, GM had a built-in Engine Control Module on California cars, although the device was only for pre-delivery testing.

California changes the rules
In 1987, the California Air Resources Board ruled that all new cars sold in California must have basic on-board diagnostic capability. In 1988, the Society of Automotive Engineers outlined a 16-prong connector and standard diagnostic test signal protocols for future systems. In 1994, California created a statewide emissions testing program built around semi-standardized specifications.

On-board car computer systems are now a fact of life. The complications begin when each of the car’s systems talk to other systems. As a quick example, modern Ferraris have their outside air temperature sensor built into the left mirror, and air temperature information is relayed to the entertainment system for display, to the engine management system, the air conditioning system, the evaporative system and more. All of those systems integrate that temperature into their operating systems.

Developing, integrating and problem-solving these on-board computer systems is a function of economics of scale.

As an example of the costs involved—and Ferrari’s desire to be on the leading edge—the U.S. model of the Ferrari F40 was the first car to use a metallic core catalyst. The federal Environmental Protection Agency and Department of Transportation homologation process was $11m in 1988-89 dollars, which was amortized over a mere 210 U.S.-model F40s. That’s more than $50k per car!

Ferrari builds about 6,000 cars a year in four very different models: the long-in-the-tooth 612; the soon-to-be replaced 599; the California and the 458. Each is expected to offer luxury and dependability—and crank out well over 100 horsepower per liter and scream to 8,000 rpm after a quick warm-up. Yet, these cars must meet the same emissions standards as a Ford Focus.

It is logistically and financially impossible for Ferrari to build a fleet of pre-production cars and drive them for millions of miles in wildly varied environments to root out potential problems in on-board computers.

Ferrari also had to develop their car computer management systems without the benefit of a deep-pocketed big brother. One only has to go down the road a mere 21 miles to Lamborghini, where engineers had the benefit of a Chrysler-derived engine management and emissions system through the 1990s. Lamborghini then switched to an Audi-derived system with the Gallardo in 2005.

“Global companies such as Ford, GM and VW build, test and crush more cars a year in/during their product development and certification than Ferrari builds,” said a senior executive at a major car company.

Pity the Ferrari shop
Today virtually all shops and Ferrari mechanics work with a standardized amount of time for any given job. No shop or mechanic wants to turn a 30-minute systems inspection into a two-day troubleshooting process, but it happens.

No one wins in this scenario, as the shop and mechanic can’t charge for the hours spent looking down rabbit holes, and the owner is not eager to pay for an exploratory mission.

A painstaking system
Most Ferrari diagnostic checks begin with a cold start after an overnight cool-down, and the process moves on to a drive sequence.

The simplest checks have five steps and start with a cold engine that is allowed to idle for four minutes. Then, according to the manual: “Drive the car normally (no hard accelerating or erratic shifting) in 3rd or 4th gear at 2,000 to 4,500 rpm at a constant speed for 3.5 miles. Then slow down in 4th gear from 4,400 to 2,000 rpm.”

Try to find a place in city traffic to drive in 4th gear at 4,500 rpm— let alone follow the next three steps. The more complicated tests all have more than a dozen equally impractical steps for a single test cycle.

“It’s like having a large office network of PCs that quits working,” a Ferrari service manager said. “Is it software, hardware, cables or a user fault?”

Radar detectors, stereos, rear view cameras and other aftermarket components can add to the problem. A substandard installation in some car stereo shop can cause hours of diagnosing OBD II codes.

The future
The good news is that the latest Ferraris, such as the California and 458, have more comprehensive integrated diagnostic systems. Ferrari’s latest Diagnostic Easy Integrated System laptops are connected directly to the factory through the Internet. The latest software updates are automatically downloaded from the factory to the dealer overnight via the internet, which sometimes makes the diagnosis easier.

How to avoid trouble
Here are a few tips to keep your modern Ferrari happy. Many Ferraris sit for weeks—if not months—without being driven, and nothing will trigger OBD II warnings faster than low-voltage starts. Do not disconnect the battery when your car is parked, as the computers will want to reset, which is begging for problems.

All new Ferraris come with a battery tender. Use it and never start your Ferrari when the battery is low. Allow your car to warm up slowly and drive moderately until the temperatures are up.

If there are electrical gremlins, take your Ferrari to the largest and best-equipped shop in your area and have patience. That shop becomes your partner in trying to solve the problems. While all the questions may seem obscure, the answers can help solve the problem.

All this is part of the price of owning one of the most exclusive cars on the planet.