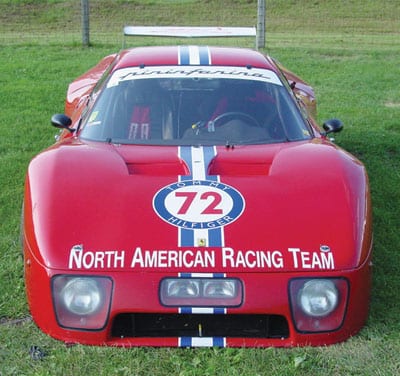 One of the side effects of the worst economic downturn in many decades has been a weak U.S. dollar. As the dollar has declined over the last 18 months, the asking prices of American-based collector cars suddenly look like bargains, at least when compared to asking prices in Europe.

There is logic to this perception. For instance, six of RM Auctions’s ten top selling cars of all time were sold at their auctions in England and Italy.

Consequently, we’ve had no lack of calls and emails from clients wanting us to sell their cars to Europe. (Arbitrage is the formal name for taking advantage of the differences between two markets.) Predictably, they also want us to sell their cars for the asking prices shown on various European web sites and in European magazines.

The initial inspiration for this column came from a multiple-Ferrari-owning client who sent the following email:

HI MIKE I HAVE A 2001 BMW Z8 WITH APROX 50,000 MILES IN PERFET CONDITION. I SEE THAT THE PRICES IN EUROPE ARE ON THE $160,000 AND UP RANGE AND IN THE STATES ON THE $110,000, DO YOU HAVE CONTACTS IN EUROPE TO SELL MY CAR SINCE I LIKE TO SELL ON THE HIGH END OF THE SPECTRUM, SINCE IS PERFECT BLACK WITH BLACK INTERIOR, I HAVE OVER $30,000 ON SERVICES AND REPLACEMENTS OF THE CROMES DASH ETC ALL DOCUMENTED, LOOKS NEW… I DONT WANT TO SELL AT US PRICES IF NOT I WILL WAIT SINCE I THINK THIS CAR WILL APRECIATE IN VALUE OVER THE NEXT 5 YEARS.

The eternal optimism of human nature
I’m endlessly amazed that would-be sellers always look at the highest asking prices as a baseline for the perceived value of their high-mileage driver, while would-be buyers always look at the lowest advertised price and want to find a fresh Platinum-level restoration at (or below) that price point. While I knew there was no hope of selling this client’s 50k-mile Z8 to Europe at anywhere near $160,000, and that in five years it would just be older, not more valuable, out of both curiosity and courtesy to a good client, I dashed off a few emails to a few European dealers for their thoughts.

Same questions, different car
The same day I received an email from a client wanting to sell his Ferrari 206 GT Dino in Europe. He wrote: “Asking prices for 206’s are in the 170 Euro range OVER THERE.” He added: “I had my friend in Germany let me know that 140 Euros is a great price for someone over there…that’s $210k in USD.”

I pointed out that if a European buys a car in Europe, he can see it, touch it and drive it, a luxury he doesn’t have when buying a car from the U.S. Additionally a European buyer has to pay up front, in full, no financing, for a car he will not see for at least a month, and that buyer will have to pay shipping, insurance, dock charges, customs brokers, import duty and value added tax, most of which he can save by buying a car already in Europe.

Further, I added that if a European buys a car in Europe and there is a problem, he has various forms of recourse, but when he buys a car from the U.S., he is buying on a wing and a prayer. I also noted that asking prices are relatively meaningless in this market and ended up paraphrasing John Donne by saying just as no man is an island, entire of itself, how can a driver-quality 206 GT still be worth some number north of $200k when a great Daytona has dropped to $250k–$300k and a former Platinum-level 246 GTS now sells for $150k–$175k?

The pecking order
England has a many-decades-long history of collector cars being imported and exported as markets and currencies have changed, so it has long been the easy-access clearing house to import a car into the European Union. If (a BIG if) a car qualifies as a “collectors’ piece of historical interest,” it can be imported into the EU with no duty and a reduced VAT rate of 5% if in the U.K. and 6% to Holland. Cars built before 1950 are no longer automatically eligible, but if a car is more than 30 years old, of a type no longer in production, and is basically unmodified, it stands a reasonable chance of qualifying, if it is rare, valuable, and interesting. Best policy is to have the car pre-cleared by British Customs by applying for a BTI (Binding Tariff Information).

If you’re importing a car with a limited production run, a unique show car, a car built for or owned by a famous person, or with a recognized race history, your car will probably qualify for the 5% VAT. If not, Customs duty through England is 10%, and VAT would be 17.5%. Import rules and tax rates can vary wildly from country to country, with duty at 10% and VAT at 25% in Sweden, as compared to a 10% duty, 19% VAT, and 27.4% BPM (a “green” tax) for Holland. Further complicating the madness, every European country has a looming deficit, so import duties and taxes will likely go up in 2010.

When in doubt, consult
Anyone who wants to sell a car to Europe should consult with a professional shipper such as Cosdel International Transportation, a San Francisco-based Customs broker and shipper which can be reached at [email protected] For Europe the experts are Cars UK, at [email protected] If shipping becomes a problem, Sports Car Market Contributing Editor Martin Emmison, at [email protected], is a lawyer who can handle your contract and import negotiations or (if you have a really serious problem) take your import tax battle to the English courts. Needless to say, Cosdel works with Cars UK on a daily basis, and both work with Emmison on those rare occasions a lawyer is needed.

While no one is going to pawn off his high-mile BMW Z8 to Europe at the upper end of German asking prices, even if he did, the new owner would surely incur the highest tax rates. However, the owner of the 206 GT would probably get his car through Holland at the 6% rate, because there were only 150 built.

As for selling a car such as the 206 GT at the high end of the European asking price range, that’s a dream: It takes an exceptional car to get an exceptional price. If the car you are selling isn’t very rare or valuable or a limited-production example, wasn’t a factory show car, didn’t have a famous owner, and wasn’t a notable race car, you may be fighting an uphill battle. As an example, if you have a 1977–81 512 BB or a 1982–84 512 BBi, you’re probably going to be paying the big duty, but if you are importing one of the 25 factory-built 512 BBLM race cars, there is a good chance to get it into Europe at 5%.

My advice to sellers today is to forget any sugar-plum-fairy fantasy prices you see in European magazines, and plan to sell to a U.S. buyer, in the U.S. price range.

Thanks to Andrew Turner, Martin Button of Cosdel, Jeremy Barker of Cars UK Ltd., and Martin Emmison of Goodman Derrick for their help with this article.