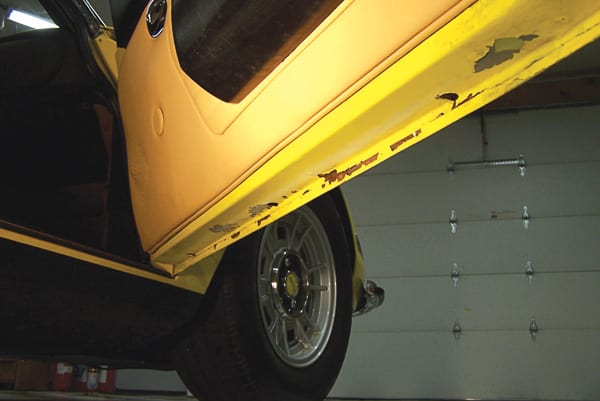 The daily drama of selling older Ferraris provides a constant supply of material for this column, as the same set of problems endlessly repeat themselves in slightly varying scenarios. Rather than continually go through the same explanations, it’s often easier simply to tell people, “Stand by, and I’ll email you one of my columns that should answer your questions.”

At 20 years you start over
But here’s a new subject, related tangentially to the topic discussed ad nauseam—deferred maintenance. Part of our business model is to seek out and sell former “Platinum-level” cars as examples of the best-of-the-best collectible Ferraris. To achieve Platinum, a Ferrari has to score 95 points or better by the Ferrari Club of America’s tough test, an ultra-high standard for any older Ferrari, and a standard that very few will ever meet.

When potential buyers call about former Platinum-level Ferraris, we always start by explaining that Ferraris are like Uranium U-238, and while the half-life of U-238 is 4.5 billion years, the half-life of a Ferrari restoration—or indeed any Ferrari, new or old—that hasn’t been rigorously maintained, is about ten years. At 20 years, it is usually “start-over” time, as they fade into studies in deferred maintenance.

I go on to explain that doesn’t mean a 95-point Ferrari drops to 50 points on the FCA scale ten years out, but rather that every component on every car has a shelf life, be it tires, gas, leather, or paint; all are perishable in one way or another. I explain that if you were to buy any new car, a Toyota or a 599, and park it for ten years, the list of deferred maintenance will be long and expensive, so why would a Platinum-level Ferrari be any different ten years out?

Additionally, when talking Platinum level, I am almost always dealing with pre-Fiat-era cars—Dinos and Daytonas and earlier—so the build, trim, chrome, and rust-proofing levels when new were nowhere near today’s build standards, and nowhere vaguely near today’s Platinum-level standards.

As a rather extreme example, I recently offered 1972 Ferrari 246 GTS s/n 03998, finished in Fly Yellow with black leather, for $179,500 F.O.B. North Dakota. It had achieved the ever elusive “Platinum” at Cavallino in January 1998 and had seen little use since. Before we list any Ferrari we ask the owner (or preferably his mechanic) to look it over carefully. Although 246 GTS s/n 03998 had been stored in a heated private collection, those nine years had taken their toll.

As per the owner’s personal inspection, the power windows and wiper motor assembly had developed arthritis, it had sprung the usual oil leaks and was also leaking from the fuel filter. These issues were explained to the prospective buyers.

The need for inspection
Once advertised, there was no lack of buyers, and so the logistics of a comprehensive third-party inspection were put in place. Because 246 GTS s/n 03998 was in North Dakota, the logistics of inspection were difficult—it seems you can’t get there from here. The first pre-purchase inspection was eventually done by a qualified Ferrari mechanic, who also found that the radiator needed to come out from years of sitting, the exhaust tips had been replaced by non-factory parts, the tires were “H”-rated Michelin tires, not “R”-rated, the a/c needed to be recharged, and the paint had its share of minor chips, coupled with a small list of lesser problems. While the price was negotiable, the buyer had really wanted a car that would still score 95 points or more, and so this car was not for him.

Next buyer faded away
The car was then offered to a second buyer, who acknowledged the list of problems and sent his own qualified mechanic on the long plane ride for a second pre-purchase inspection. Armed with the previous mechanic’s report, the second mechanic looked further and longer and found paint blistering under the doors from poor paint prep done a dozen years ago. A series of emails followed back and forth that explained the differences between paint blistering from rust bubbles inside the door and paint blistering from poor paint prep underneath the doors, as well as the comparative cost differences, from a few hundred dollars to repair poor under-door paint prep versus several thousand dollars to replace door skins and repaint entire doors. While the explanations were accepted, the mood was dispelled and the buyer was gone.

Finally, somebody who got it
Enter the third buyer, who was supplied with both inspection reports. None of the age-related problems found in the two pre-purchase inspections should be deal-killers, just realistic assessments of the condition of a Platinum-level Ferrari ten years further down the road. After the usual round of negotiations, both parties reached a compromise that included an equitable split on the $15,000–$20,000 estimated cost of repairs, the buyer signed a purchase agreement for $160,000 and the seller received payment.

The seller felt he got a reality check on what his former Platinum-level Ferrari now needed, as well as a fair price, based on the purchase inspections. The buyer felt the final price gave him the room he needed to bring the car up to his standards for a great driver. He had no immediate plans to show the car, felt it was a good value, and was prepared to give the car to a local shop that would deal with what were, in effect, deferred maintenance issues. Having been Platinum was a plus and the associated books, tools, and photo album were a bonus, but going back to Platinum was not in his immediate plans.

Time stands still for no Ferrari
The morals to the story are many. All Ferraris—be they new, Platinum winners, or daily drivers—deteriorate with age. Regardless of which Ferrari one considers, a pre-purchase inspection is mandatory, and the list of problems found will virtually always grow with the age of the car or its restoration. While we at SCM preach the fiscal propriety of buying a restored car under the “buy the restoration, get the car for free” plan, the reality is that in a strong Ferrari market, that isn’t going to happen. The good news is that older, pre-Fiat Ferraris are infinitely recyclable, but that is an ongoing process, and time stands still for no man, and certainly no Ferrari.

Long ago, I found the key elements to a successful purchase are a pre-purchase inspection, then the seller’s acceptance of the problems found. The buyer then must understand that older Ferraris are just used cars, albeit expensive ones, and like all used cars will need to have issues dealt with before they are parked in your garage. Expect any “former Platinum-level” Ferrari to go through life without deterioration and you will be disappointed. Expect it to need some loving care and you will be rewarded with a terrific ride.