Death of a Dynasty 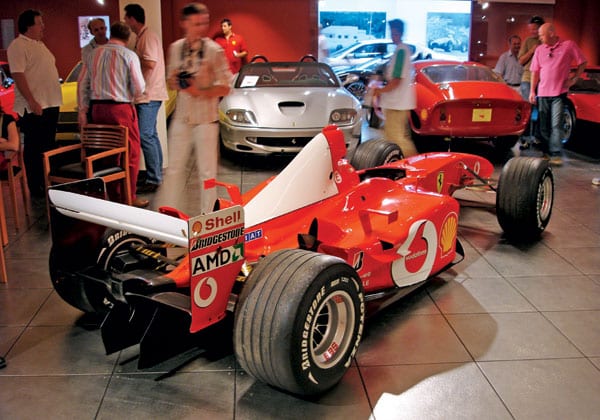 Death of a Dynasty

A three-billion-dollar car business, a garage full of collectible vintage Ferraris, including a 250 GTO, and franchises strung across Europe like stars in Orion’s Belt. This impressive empire was 100 years in the making—but in the last three years, it has come completely apart.

Frits Kroymans is the Ferrari and Aston Martin distributor for Holland, which sounds like a substantial high-level enterprise. But it’s a shadow of what the Kroymans Corporation was until recently, when the worldwide downturn plunged it into a $951m bankruptcy.

At the company’s peak in 2007, Kroymans was the importer and main dealer for Cadillac, Corvette, and Hummer for Europe, a distributor and/or dealer for Jaguar, Saab, Kia, and Alfa Romeo in the Netherlands and Belgium, and a dealer for Chevrolet, Opel, Ford, Land Rover, Suzuki, Mitsubishi, Lancia, Fiat, Nissan and Volvo in Holland, Belgium, and Germany. The group also offered leasing, dealer financing, insurance, fleet management, body shops, and more, and in 2007, its annual cash flow was $3.09b—yup, that’s billion. How did it all go so wrong?

A hundred years in the making
Kroymans was founded in Amsterdam in 1902 by the great-grandfather of current chairman Frits Kroymans. He started as a dealer for Adler, a German car, then picked up Spyker, a Dutch car. In the 1930s, the business moved to Hilversum, and by the 1950s and ’60s it offered the entire line of BMC products, including Rover, MG, Austin, and Morris. So far, so good.

In the early 1970s, current chairman Frits Kroymans took control and raised the profile by becoming the Ferrari distributor for Holland. In the late 1980s and early ’90s, he began a very ambitious expansion program, distributing or selling Jaguar, Opel, Ford, and other makes. And in 2000, the Kroymans Group took over A.R.M.-Stokvis, which included Kia and Saab. At the height of the Kroymans Corporation’s fortunes in 2007–08, the group had 150 companies and 3,900 employees.

A bridge too far
The Kroymans expansion began to go awry in 2003, when it became the Cadillac and Corvette distributor for Europe, in charge of all EU members as well as Switzerland and Norway. With exclusive importation agreements, Kroymans began building high-profile, “flagship” mult-car showrooms in Berlin, Düsseldorf, Hamburg, Nuremberg, Stuttgart, and other major German cities, all with a vision of selling 25,000 new Cadillacs a year, plus Hummers, Saabs, and other makes. But Cadillac sales never exceeded 5,000 cars a year.

To boost Cadillac sales in Europe, Saab and Cadillac collaborated on the Cadillac BLS model, a rebadged and redesigned version of the Saab 9-3 built by Saab in Trollhättan, Sweden. No one was fooled, and the lack of a diesel engine option was a major handicap in the EU markets. Sales began in March 2006, with a station wagon joining the line for 2007. The BLS was also introduced to the Arab, Mexican, South African, and South Korean markets in 2007. Unfortunately, Saab-Cadillac built only 2,772 BLS models at the Trollhättan factory in 2007, with a catastrophic 282 sold in Germany—in a market with total annual sales of 3.15 million. Production of the BLS ended in summer 2009.

A consortium of Dutch and German banks backed Kroymans’s aggressive expansion. At the top of the economic boom in 2007, cash flow peaked with revenues of $3.09 billion at current exchange rates. But most of the dealers were marginally profitable and when the slowdown hit, sales imploded. On March 20 of this year, Kroymans Corporation was unable to reach an agreement with its banks on more financing, and the company went into receivership with more than $951 million in debt. Most of the companies were unwound, and in October about 1,000 unsold Alfa Romeos and several hundred unsold Cadillac BLSs were sold at wholesale dealer auctions.

In American historic racing circles, Frits Kroymans is best known for the spectacular crash of his 1993 Ferrari F399 Formula One car at the Saturday session of the Monterey Historic races in 2004. He spun on a warm-up lap, crossed the track and hit the inside tire wall at Turn 6. The relatively slow crash broke the car in half, leaving his legs and lower body hanging out of the remains of the car. Fortunately he was not hurt, but he added to a bad weekend at the races with a spectacularly long spin in his Ferrari 250 GTO, coming down the hill from Turn 9 to Turn 10. He recovered and finished 14th.

On the subject of crashes, the centerpiece of the Kroymans collection was unquestionably 250 GTO s/n 4757GT, which suffered the mother of all accidents at Le Mans on June 15, 1963, when Carlo Maria Abate slid off the road in the middle of the night on oil from the blown engine of 330 TRI 0808, driven by Roger Penske. 250 GTO s/n 4757 was repaired then raced hard in 1963, requiring a second rebuild and a full re-body by the factory at the end of the 1963 season. It was raced in 1964 and early 1965, before being sold to American movie producer John Calley.

In 1982, this GTO found its way to Chris Murray, an American drug dealer who turned up dead, as drug dealers often do. The Ferrari was seized and sold by the FBI. Today it does not have the correct original engine, although there are rumors that Kroymans has an original but non-matching GTO engine, and there are further issues concerning the front of the chassis, which may have been replaced after the 1963 crash. These subjects have been a constant source of emails on Ferrari chat groups, as aficionados anticipated the first ultra-high-end Ferrari sale in the current economic downturn. Estimates on its value ranged from sub-$10m with chassis and engine complications to as high as $15m with a correct GTO engine.

Wrong moves, wrong time
In a lesson about why you shouldn’t mingle personal and business finances, Frits Kroymans brought his Ferrari collection into one of his companies under a lease agreement, which meant that it too went into receivership in March.

So why hasn’t the collection shown up at auction? At press time, we learned that the entire collection was bought by a representative of an American collector. Insiders say the receiver was looking for €20m (about $30m), while the bidding had gone well over €15m (about $23.5m). Surely we will see some of the cars coming to market in the near future.

Bottom line: A billion-dollar empire is no more and 3,900 people are unemployed. Kroymans is a nice guy, but he made the wrong moves at the wrong time with the wrong product—and a lot of people paid the price.