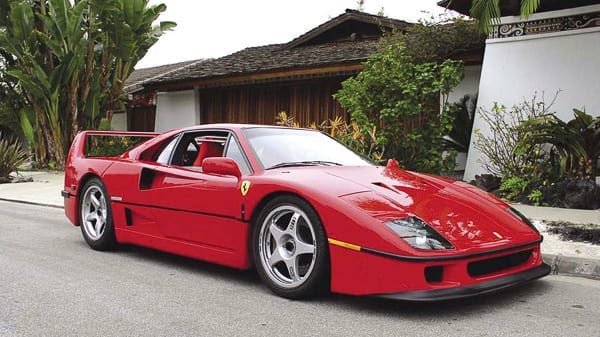 Often when someone decides to part with a prized Ferrari, it may not have been started or driven for months or years. Just as likely, chances are the new owner, excited by his new toy, wants to start driving “now,” and as often as he can. And that’s where the problems can start.

A VISIT FROM FATHER TIME
Anyone buying a $4,500 1992 Chevy Camaro expects a worn suspension, flaccid shocks, minor engine leaks, a clunking differential, and a/c overdue for a recharge. The buyer gets basic transportation and accepts the shortcomings.

Ferraris also age. Someone buying a 1992 F40 will be spending about $335,000, yet their “new” F40 will have the same inherent, age-related problems as that Camaro. They will just cost much, much more to repair

Virtually every 10-plus-year-old Ferrari needs the shocks rebuilt or replaced, suspension bushings replaced, brake hoses replaced, water pump rebuilt, water hoses replaced, an engine reseal because of oil leaks, and fuel cells replaced, if so equipped. All rubber or related components deteriorate with age—the key is to identify these issues and factor them into your sales negotiation.

Common sense and driver preservation dictate that safety-related items such as deteriorated brake lines or frozen shocks or brake calipers have to be repaired before the car can be used, and should be factored in at some percentage of the purchase price. While age-related problems are negotiable, other issues can be deal killers. These include major crash damage that has been poorly repaired, bent frames that have been badly fixed, or a sick engine that needs an expensive and mandatory engine rebuild.

THREE STEPS TO A HAPPY BUYER
Any successful purchase of an older Ferrari involves three steps. First, a pre-purchase inspection that tells all involved exactly what potential problems are lurking. Secondly, an understanding on the buyer’s part that these are “just used cars,” ones that almost always need immediate post-purchase service work. And third, the acceptance that most of the money spent beyond the purchase price will never be recovered and becomes a diminishing return.

I usually recommend that buyers and sellers reach a percentage split agreement on the estimated cost of repairs. These agreements work well because the buyers aren’t nearly as eager to have every aging part on the car replaced if they are paying part of the bill, and the sellers are (begrudgingly) paying for their own deferred maintenance.

JUST ONE MORE THING
The Ferrari caveat is that it is oh so easy to go into the “while you’re at it” mode. While the brakes are off, let’s have the calipers re-plated and re-sleeved. Isn’t the moment while the suspension is apart for a bushing replacement the perfect time to powder coat or re-plate the suspension arms, like everyone else in the local Ferrari club has had done? And while the brake rotors are off being machined, how about powder coating the uprights and replacing the wheel bearings. Suddenly, a basic brake job and suspension bushing replacement has become a $20,000 restoration of both systems.

It is not, however, the seller’s responsibility to provide the buyer with a suspension capable of winning a Ferrari Club of America National Meet Platinum Award under the guise of a routine service.

Much to the surprise of all involved, the pre-purchase inspection found a long list of needed repairs including a bent valve and a worn out limited slip, so an engine-out service was mandatory. The starting estimate for the work was for $15,000-plus, this on an unusually nice, supposedly “no stories” car.

The while-it’s-apart list included the expected all new belts and hoses, brake pads, etc. A new clutch assembly, special brake work to fit an emergency brake to the LM racing brakes, and a radar detector kicked the final bill to $21,000-plus making our “serviced only 500 miles ago” F40 suddenly seem like the Ferrari world’s equivalent of that beater Camaro.

Fortunately, the buyer accepted that the majority of the problems were common to most 10-year-old Ferraris. After the usual negotiations, a compromise was reached, an equitable split for repairs was made, and a purchase agreement was signed. Both parties wound up satisfied.

DOING THE SPLITS
The degree of compromise involved in any purchase is a matter of the seller’s motivation to sell and willingness to accept less than was anticipated, factored against the buyer’s desire to own the car and pay a little more for the privilege. Add in the broker’s experience, his ability to explain the problems, and the negotiation skills that justify his commission, and the gap between expectation and reality in dealing with deferred maintenance can usually be resolved.

The buyer and seller here both had to accept that a 1992 F40 hot rod is worth about $325,000, and regardless of how much money is spent on recommissioning, it will remain a $325,000 car. The $21,000-plus spent on service will enhance the new owner’s driving pleasure, safety and peace of mind, but that’s it. No value add to the bottom line.

As I told the buyer, expect your used F40 to need the minimal maintenance of a Mercedes and you’ll be disappointed. Expect it to need an infusion of love—and more than a few dollars to return it to its “as new” condition—and you’ll be rewarded with a terrific ride. Every hobby, from collecting stamps to America’s Cup competition, has a price attached. With Ferraris, expect the “pay to play” ticket to be a healthy one, and you won’t be disappointed. And, at a local track day, when you hit redline in 3rd gear in your F40, and crack a quick shift into 4th and break the rear tires loose, I guarantee the amount you’ve spent to get there will be the furthest thing from your mind.