Don’t Look Now, But ‘Cuds are Worth More than Daytonas 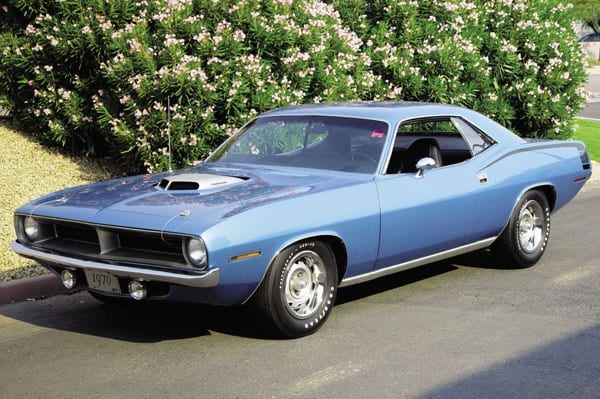 Don’t Look Now, But ‘Cuds are Worth More than Daytonas

We sporty-car types like to talk about the sophistication of our multi-cylinder, multi-carbureted mounts. American iron, you know, those crudely suspended, under-braked cars with huge lumps of iron under the hood, are just the toys that gas station attendants who never grew up lust after.

Well, in case you haven’t been paying attention, the market values of muscle cars, and Hemis in particular, have soared past those of Ferraris in the past couple of years. I have spoken with numerous muscle car gurus while doing the research for this article, especially Colin Comer of Classic Auto in Milwaukee.

The end result is, at least when it comes to value, me and my nose-in-the-air Ferrari buddies are going to have to eat some pretty large helpings of humble pie when we sit down with our ’Cuda friends.

By comparison, Daytonas are still in the value sinkhole. Recall (if you can without feeling too much pain in your wallet) that in the late ’80s, Daytona coupes went from $75,000 to $500,000 and Spyders zoomed Enron-style from $150,000 to $1.5 million in just four years. Then, in 1991, the bubble burst, and values have never really recovered.

Market price today for a good 365 GTB/4 coupe is $125,000 and goes to $150,000-plus for a “restored-to-death” example, while a good Daytona Spyder will bring $345,000 plus an extra hundred grand or so if it’s nicely restored. With the inflation of the Euro, the very best cars are going to Europe fairly quickly, but not really for much more money. And trying to sell a car with needs continues to be like trying to convince someone that Martha Stewart really did have a $60-sell agreement with her broker.

With Hemi ’Cudas vaulting into the same price range as the Daytonas—and beyond—muscle car guys say these cars are all being sold to end-users, not speculators buying them to re-sell in a few months. We’ve all heard that before, haven’t we? Anyway, time will tell, but the price of admission is certainly climbing in the Hemi world, making Ferraris look like bargains.

By comparison, there were 1,279 Daytonas built, including coupes and convertibles, from 1969 to 1974. When tested by Road & Track in the October 1970 issue, a standard Euro-spec Daytona blasted through the quarter-mile in 13.8 seconds with a trap speed of 107.5 mph, using only the first three gears. Third would top out at 116 mph, while fourth was good for 148, and fifth would get you to 173 mph.

So how does a Hemi ’Cuda compare? When tested by Car Craft in 1970, a 426 Hemi coupe did the quarter-mile in 13.10 seconds at 107 mph, topping out at 125 mph because of its low gearing. (God help you if you actually had to stop the car from that speed, as the drum brakes would fade into oblivion long before you stopped rolling.)

The 426-ci Hemi (that’s a whopping 7 liters) had a stated 425 horsepower and the car weighed in at 3,620 pounds. Cornering at speed with the mass of weight in the front was much like teaching an elephant to dance, but how many corners are there on a drag strip anyway? Base price was just $4,035 for the coupe or $4,400 for a convertible.

While the cars may seem pretty similar on the dragstrip, there’s a good reason you’ll never see a Daytona racing brackets. A Daytona engine rebuild starts at $25,000, and a new clutch runs $2,500. A transmission overhaul will set you back about $3,500. A major service, due every 30,000 miles or five years (whichever comes first), is about $5,000. This versus $9,000 for a Hemi rebuild, including parts, carbs, distributor, etc., all “done”; $800 for a clutch; $2,500 for the transmission (or just $1,000 to rebuild an automatic); and the average tune-up and valve adjustment, on a dyno, coming in at $500–$800 for parts, labor, and time. Of course, we don’t usually buy collectible cars because their clutches are cheap.

Comer couldn’t resist adding his two cents worth here: “When can I please take my modified Hemi car, with the 528-ci stroker motor and six-speed trans (less than $20k in mods all in), and run it against your basic hot-rod Daytona with the typical $50k or more in mods it takes to get those puny-cylindered things to actually put out some horsepower?”

My research shows that the average Daytona buyer is 45 to 55 years old, self-employed, and owns a company that does anywhere from $10 million to $100 million a year. Interestingly enough, the average Hemi-Cuda buyer has the same profile, more or less, with the major difference being that the Ferrari buyer dreamed of Prancing Horses in high school while the Mopar collector had muscle car posters on the walls of his bedroom. And of course, there are many collectors who have both a Ferrari and a Hemi parked in their garage.

In the end, both models are going to be decent investments over time. Due to their extremely limited production numbers and historical value as “the best of the best” of the Rapid Transit System era, I can see Hemi ’Cuda convertibles being seven-figure cars, just as true Daytona Group 4 comp cars are.

But we all know that buying a collectible car is about more than its investment value. If I had a spare million to spend, you’d see me chasing an SWB, not a Hemi ’Cuda. And I’m sure to a guy who lusts after the ’Cuda convertible, he’d think I was nuts to spend so much on a hardtop car with a pitiful 3-liter motor. Luckily, he won’t have to ride in my car, and I won’t have to ride in his, and we’ll both be happy.