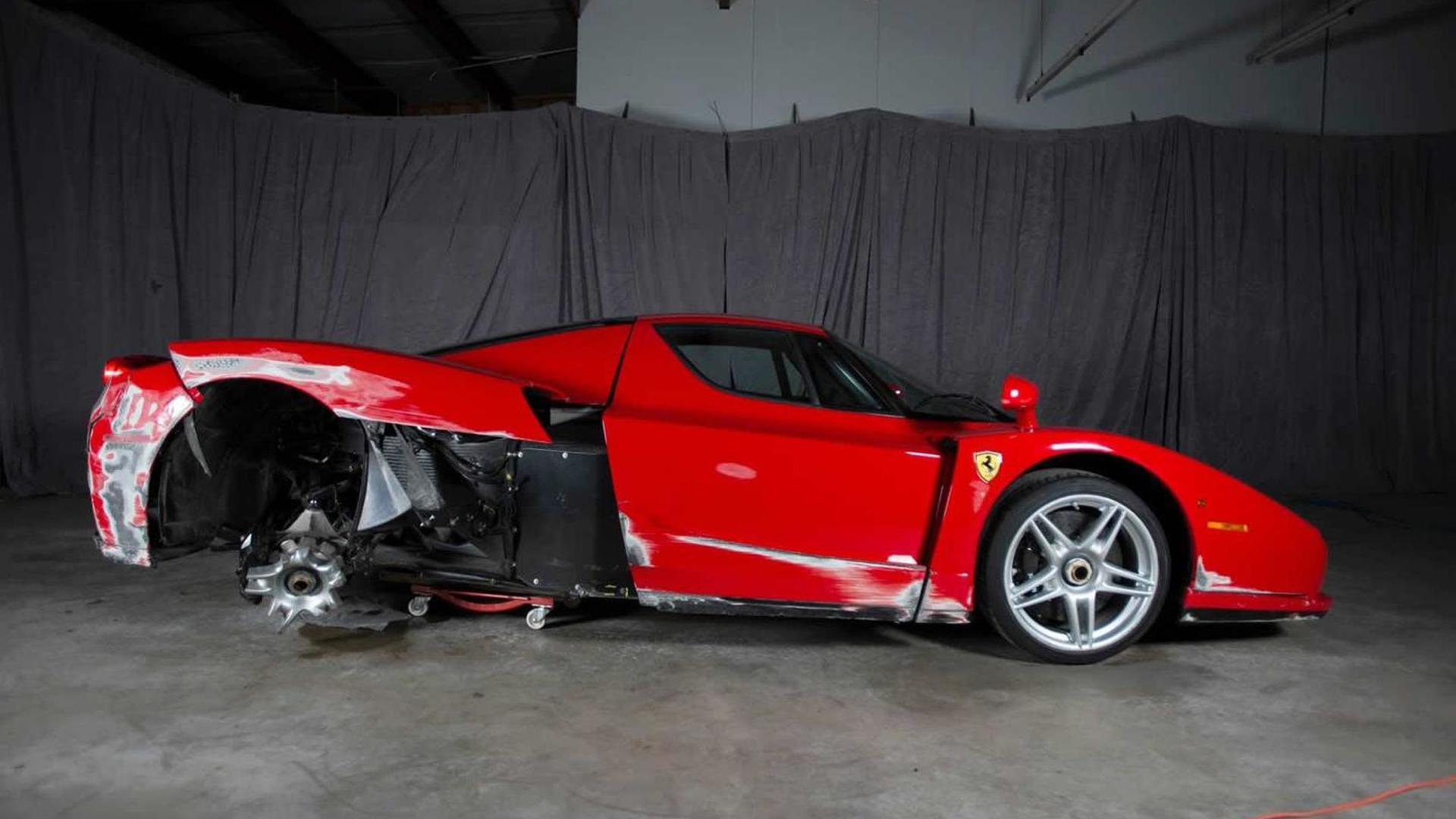 As virtually everyone in the car world knows, on March 26 actor Eddie Griffin crashed a Ferrari Enzo at Irwindale Raceway in L.A. while practicing for a promotion for the movie “Redline.” The Enzo was owned by Daniel Sadek, “Redline” executive producer and exotic car collector. Because the crash was captured on video, news shows and the press had a field day, exclaiming that the Enzo was a $1.5 million dollar car, and as one of only 400 Enzos built, was very rare. Moreover, it had been “totaled.” Eddie Griffin’s comment that “Undercover Brother’s good at karate and all the rest of that, but the Brother can’t drive,” referring to both the accident and his 2002 movie, also made for “good press.”

Time for a reality check
The reality is that the Daniel Sadek Enzo is a high-mile driver. It has been in the local Ferrari authorized body shop twice—that I know of—for lesser repairs and is not without stories. For example, I was doing a test session in a late-model stock car at Irwindale while “Redline” was being filmed, and the Enzo was parked in the back lot. It was left in the parking lot at Irwindale overnight and vandalized when someone threw a large rock through the windshield. It was also used as a stunt car in the filming of “Redline,” and had unquestionably been used hard and put away wet. Bottom line, I sell Enzos for a living and, given the number of “no-questions” Enzos out there, this Enzo was worth some number south of $1 million prior to being crashed by Eddie Griffin.

How many did you say?
As for being one of 400 built, thanks to historians like Gerald Roush of the Ferrari Market Letter, a well-known member of the serial number swapping group to which I belong, we have confirmed records on 446 Enzos to date, and the list is growing. This is obviously well over the official number of 399 plus 1 used by Ferrari.

How can this be? Very simple; Ferrari is a “for profit” organization, and once the development and production costs of the Enzo were paid for, each extra car delivered at $650,000 or so had a very large profit margin built in. Add a lot of wealthy and well-connected owners who were miffed that they were not on the lucky list of 400, and you have a burgeoning market making wealthy clients happy by making “extra” cars. So much for the one of 400 myth….

How do you total a $1 million car?
So how DO you total a $1 million car, let alone a $1.5 million car? Having run a Ferrari-only body shop for 25 years, I know that fixing any Ferrari is like fixing any other car except the dollar numbers are much bigger. How expensive are the parts? The parts prices are blocked in the Ferrari dealer’s parts computer and the only way to get parts price quotes from Ferrari is for the authorized dealer to supply photos of a crashed car and the serial number of the car.

I do know that a single carbon-fiber rear fender was about $60,000 a year ago. At the time of writing, the Sadek car has not made its way to a body shop, but multiple other Enzos have. A quick check with my historians group turned up literally dozens of Enzos that had been wrecked, from Korea to Dubai and all points in between.

What Griffin damaged
The video of the Eddie Griffin crash showed that the damaged Enzo was on all four wheels and rolling after the crash, so the majority of the damage was confined to the area in front of the suspension pickup points. A quick phone call to a few authorized Ferrari dealers that have fixed crashed Enzos (and who asked to remain nameless) confirmed that Enzos with damage similar to the Daniel Sadek Enzo were repaired in the $240,000 to $300,000 range by one of six Ferrari authorized repair facilities in the U.S. (who also wanted to remain nameless).

Shop owners told me that if there is no damage to the tub, the cars are fixed in the U.S. The new carbon fiber nose, fenders, and inner panels are ordered from Ferrari and fitted; new aluminum inner structures are fitted as needed, the car is painted, and the Enzo is back on the road. Total time is about six months, most spent waiting for parts.

A quick look in the Ferrari parts computer shows that while the Enzo has an F1 or Sports Prototype carbon fiber tub-survival capsule, the tub ends at the foot-box. A large and intricate bolt-on cast aluminum sub-structure supports the suspension, steering, and all underhood accessories in front of the tub. The carbon fiber nose fits well in front of the aluminum structure, forming a crush-zone. The cockpit becomes a survival cell, with the carbon nose acting as a first-level crush zone, the complex aluminum structure as a second crush zone and finally the tub. The rear is also fitted with a similar aluminum structure and carbon fiber rear body-crush zone, protecting those with too much money and too little talent from a violent end. Ask Stefan Eriksson, aka “Deitrich.”

For the Erikssons of the world who go beyond a mere 100 mph crash and damage the carbon fiber tub, it’s time to ship the pieces back to Zanasi in Maranello, the factory’s just-down-the-road bodyshop, where the tub can be repaired and the car completely rebuilt, although the bill keeps going up. Only the “look, now I have two pieces” Eriksson car, the Losee car in Utah, other similar crashes in Nice and Milan, plus a few Enzos that burned, might be totals.

When insurers decide not to pay
Helping to take all the fun out of crashing your Enzo are the insurance companies’ bean counters and lawyers, who look for excuses not to pay. Richard Losee, of Utah, who crashed his Enzo at about 150 mph during a rally that raises money for the families of Utah highway patrolmen killed in the line of duty, has now been in a near-one-year battle with his insurance company. His insurance was paid up, he crashed his car, and now wants to have things taken care of. The insurance company took the better part of a year to settle.

As for conspiracy theories, there is no lack of those who believe that the Eddie Griffin crash was a publicity stunt, a $240,000 to $300,000 crash that would garner nation-wide publicity for “Redline,” due for release only a few weeks later. And with some luck, the insurance company might pay for it.

The Enzo is truly this decade’s state-of-the-art supercar, offering performance that not too long ago would have put a driver on the podium at Le Mans. Fortunately, the Enzo’s well-engineered crush zones and central survival cell (aka tub) have repeatedly protected those who enjoy life in the fast lane from themselves.

Alas, all too often, Enzos end up illustrating what happens when too much money, too much car, and too little talent arrive at the same place at the same time.