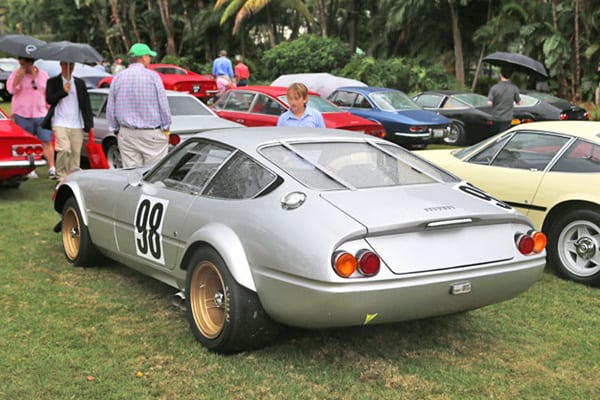 In early 2014 we felt the market for the Enzo-era Italian exotics was peaking and so between April and Sept., of 2014 we sold my non-Factory Comp Daytona s/n 14049 (with a 4-hour of Le Mans history), my Platinum-level 365 BB s/n 18265 and my Ghibli Spyder s/n 1227. All were personal cars and not inventory. I believe and live by what I write, voted with my wallet, left the Ferrari price party (and gave 35% to my unwanted partner, Uncle Sam).

Through 2015 we brokered Enzo-era cars and purchased and sold ubiquitous 308s, 328s, Testarossas and 550s as inventory as they went through their separate “tail-of-the-bubble” price cycle boom. It was a great ride, but when prices on Ferraris built in the thousands double in six months it was easy to see it would be a short ride.

As we entered 2016 the Ferrari Market perceptively softened, buyers lost confidence in the greater economy while sellers refused to accept that prices had dropped. Spencer Trenery at Fantasy Junction summarized the 2016 market well when he reviewed this column, writing that “just about everyone we have sold cars for in the last six months was depressed with the results the day of the sale, but when they reviewed (the market) 90 days later, almost everyone was happy the transaction occurred”.

Where do we go from here?
I’ve been repeatedly asked to extrapolate where I opine the Ferrari market prices might be in six months or a year, but the future of virtually all markets is now a function of the smoke and mirrors from various Central Banks. Interest rates have gone from ZIRP (Zero Interest Rate Program) to NIRP (Negative Interest Rate Program) in an effort to keep the global economies going. In Europe Mario Draghi continues to kick the financial can down the road with his mantra of “Whatever it takes” (to support the Eurozone) while in Japan Shinzo Abe and Haruhiko Kuroda continue to run the printing presses on overdrive to save the Japanese economy. All are in uncharted economic waters. As for both Chinese and Japanese debt at 260% of GDP or the uninspiring electoral choices in the US presidency, whew, let’s not go there…

Turning points or Minsky moments
Any commodity, be it oil futures or Ferraris, is worth only what a willing buyer will pay, and a willing seller will accept, on that day. Ferraris have always been a socio-economic reward for success, the symbol that the owner has moved up the ladder. When we look back at any boom and bust cycle we look for turning points, both up and down the price-point ladder.

Having lived through five Ferrari boom and bust cycles over forty plus years, I’ve long been a fan of Hyman Minsky, a rather pessimistic contrarian economist who opined that markets are inherently unstable and extended bubbles tend to end in sudden collapse. The phrase “Minsky moment” was coined by Paul McCulley (of Pimco) in 1998 while referring to the Asian Debt Crisis of 1997, in which speculators put increasing pressure on dollar-pegged Asian currencies until they dramatically collapsed. It’s economics 101, the bigger the bubble, the bigger the pop!

History is the ultimate teacher, for the lessons are proven in time and well-documented for anyone with the obsessive-compulsive patience to research the information. Looking at the history of the Ferrari market’s booms and bubbles, the turning point in the 1977–1979 Ferrari boom cycle and the 1995–1999 booms cycle were predictable to those who took the time to do their financial homework.

Conversely the downturn after the Dot-com induced Ferrari bubble of 1997–2000 was unpredictable; the falling market of late 2000 literally fell off a financial cliff with the terrorist attack of 9-11, 2001. The more recent housing and Ferrari market bubble of 2003–2007 partied on right up to August 2008 at Monterey but fell off a financial cliff with the demise of Lehman Brothers only weeks later on 15 Sept. 2008. Both 9-11 and the implosion of Lehman were Minsky moments, unexpected if not implausible, until they happened.

The herd mentality
Humans are prone to herd because it is always warmer and safer in the middle of the herd. Indeed, our brains are wired to make us social animals. While rising prices create euphoria, falling prices induce paralysis. In theory there should be no lack of would-be buyers who want to take advantage of price drops, and while there are always a few, most are overwhelmed by the force of the herd.

The November elections
As Paul Duchene, former editor at Sports Car Market asked when reviewing this column, “Can you say we are 12 months from the bottom of the market; it will be flat for two years, then gradually rise past where it is now in 4 years? Is there an algorithm you could feed into a computer with a reasonable probability? Can you feed in the average age of buyers and probable increase in incomes among future key groups? And what will they buy based on their ages?” I obviously don’t have those answers.

There’s little doubt that the market will be soft until at least the November elections. Whether the Presidential elections become an economic turning point or a Minsky moment, refer back to ZIRP, NIRP, Mario or Shinzo and both Chinese and Japanese debt. As for Donald Trump versus Bernie Sanders versus Hillary Clinton actually turning the US economy around, check your confidence level and take your pick. Personally, I’m glad I kept my Canadian passport.