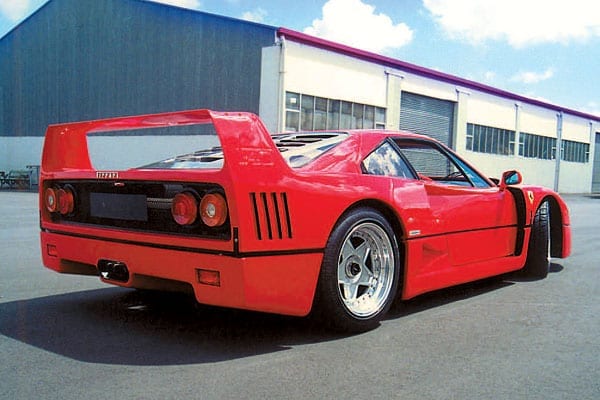 While 360 Berlinettas and Spyders, 456 GTs and 550 Maranellos and Barchettas are dropping in price, F40s and F50s are increasing in value. Why? 360s, 456s and 550s are all mass-production Ferraris, with more coming off the production line every day. As supply meets demand, their prices come down. Further, many of these cars are driven on a daily basis, racking up the miles. With time they become “just used cars,” albeit very exotic, exclusive and state-of-the-art used cars.

But F40s and F50s are entirely different animals. There were only about 200 factory-built US-spec F40s and around fifty US-spec F50s. They were the most exclusive Ferraris of their eras (’88–’91 and ’95–’97). When new, all were sold to those with the right connections to be at the top of the lengthy waiting lists, and the financial wherewithal to pay $300,000 to over a million dollars for a car that they would, in all probability, rarely use.

A new F50 listed for about $450k, but could only be leased, not purchased. As they came off lease, prices started to rise and never stopped. Today, a very low mileage (under 1,000), well-documented and properly serviced F50 will easily bring a mind-boggling $750k. With only fifty US cars built, this is the price of exclusivity.

Service problems on both the F40 and F50 are minimal, even when buying a 500-mile “garage queen.” The F40 tensioner bearings tend to tighten up, causing the outside of the cam belt to scuff and gall against the tensioner, leading to belt failure; the bellhousing is magnesium and consequently emits gases that will cause the clutch hydraulics to fail.

The major problem with the F50 is its all-electronic instrument cluster. Prior to purchase, the car should be run through its entire start-up and electronics check sequence. If some part of the dashboard is defective—not an uncommon occurrence—the dash must go back to Italy for a six month, $10,000 repair. For those not married to their local authorized Ferrari dealer, an independent Ferrari shop in the US rebuilds the dashes at one-half the price and with a much faster turnaround. The F50s had a factory recall for a defective front main seal, and any car with ultra low miles may not have had the update. Finally, the belly pan on the F50 tends to hide leaks by holding dripping fluids and must be checked for pools of problems before purchase.

I see no reason, barring global recession, that the prices of F40s or F50s will do anything but increase, albeit more slowly as we come to the end of the current market adjustment. For collectors of means interested in modern supercars, these are the ultimate Ferraris.