Fake Ferraris for Fun and Profit 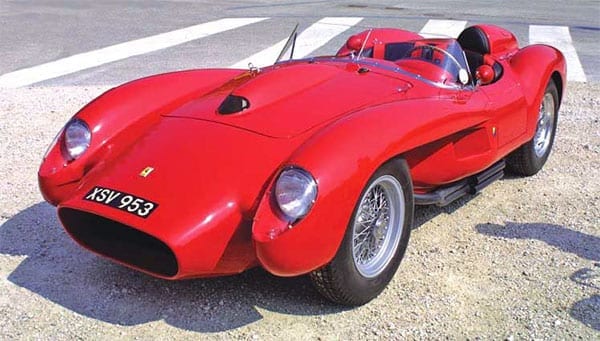 Fake Ferraris for Fun and Profit

Purists dismiss replica Ferraris as fakes that should never have been built, while aficionados who missed the first round of hiring at Microsoft appreciate their timeless beauty and affordable performance. However, in any situation that involves replication, recreation, or just downright fakery, some of these cars were built with the best of intentions—and some with the worst.

TDFS AND GTOS
Most 250 replicas were built in the mid-1980s on a shortened 250 GTE chassis with a mildly hot-rodded engine and fitted with a decent replication of the original bodywork. At a glance they look “right,” but all too often they were built on a budget, so they are underpowered, the steering ratios are wrong, the shifter is in the wrong location, and the rear leaf spring mounts protrude into the cockpit moving the seating position too far forward. They are anything but user friendly.

The best of the 250 TdF, SWB or California Spyder replicas were built on shortened and modified 250 PF coupe or 250 Lusso frames, which are very close to the originals. The brakes and suspension were updated with 250 GTE components, and the correct spring boxes, headers, exhaust, transmission cases, and differentials were fitted, all topped off with a high-quality new body in aluminum. The result is a well-balanced car that’s a pleasure to drive with a cockpit that is not a torture chamber, and brakes, suspension, and gear ratios that work.

As for 250 TRs and GTOs, the best replicas were built on all-new frames with the correct lighter and smaller-diameter tubing, as used in the originals. The engines were lowered and moved back in the frame and rebuilt with correct carburetors, cams, and other internals as per the original specifications. Ribbed aluminum gearbox castings and correct shifters were also fitted, and 250 GTE suspension components were modified, as was done by the Ferrari factory decades ago.

The best cars have well-done aluminum bodywork and are near-perfect copies of the originals. These took over a year to build in the late 1980s and cost well over $300,000—plus a 250 GTE donor car. Now you can buy one between $200,000–$250,000. Since today’s build cost exceeds market value, it’s unlikely any more 250 replicas will be built, making the best cars a bargain. Replica production was also slowed from the mid-1980s by the Ferrari Factory, which took legal action in Italy and used its connections to make life difficult for the manufacturers.

The best TR replicas were built by Giovanni Giordanengo, Mario Allegretti, and Franco Ferrari in Italy; by DK Engineering and RS panels in England; by Piet Roelofs and Alwin Hietbrink in Holland; or by Greg Jones in the U.S. These cars all carry the original serial numbers of the donor cars from which they were built and were not intended to deceive unknowing buyers. Some are actively raced in events like the Chicago Historic races or the Walter Mitty Challenge, sanctioned by organizers such as the SVRA or HSR. Almost all have been modified with updated 250-, 330-, and 365-based engines, with modern brakes and suspension tweaks that make them much faster than the originals. They are often used aggressively, just as the originals were in their prime.

THE PLOT THICKENS
Like Alfa Monzas, Bugatti Grand Prix cars, and Jaguar D-types, more “real” Ferrari 250 TRs exist today than were built by the original manufacturer. The creative (and sometimes lucrative) result of a single crashed car can mean two recreated cars, each claiming remnants of the original. In some cases a car (and sometimes multiple cars) has been created from a car that was totally destroyed years ago and in reality is gone forever. Of the 33 250 TRs originally built by Ferrari, 46 well-documented—and disputed—examples are known to exist today, one example being 250 TR S/N 0720 TR, which was the subject of a bitter lawsuit in Europe in 2001.

The original 250 TR, S/N 0720, was owned by Dave Biggs of Clarksville, Missouri. In 1965 lightning struck Mr. Biggs’ barn, destroying the barn, an adjoining garage and the cars inside. Mr. Biggs bulldozed everything and buried the debris. Before the bulldozers arrived, Biggs gave the TR frame to a friend, John O′Neil. Since the TR frame was of questionable value, O′Neil discarded the frame in a nearby ravine.

The remnants of the frame were dug up by Simon Moore and Henry Wessels and sold to English collector Rodney Felton, who had a complete car built up by Rod Jolley Coachwork in England, going eventually to Harald Mergard, a German with a substantial Ferrari collection and also sponsor of the Barchetta.cc Web site, well known to most Ferrari enthusiasts. For photos of the frame and parts, as recovered, the reader is invited to go tohttp://www.barchetta.cc/english/All.Ferraris/Detail/0720TR.250TR.htmfor more information.

But there’s more. A second 250 TR chassis turned up in Italy in 1980. In 1981 the restored frame was sold to Dutch collector Paul Schouwenburg, allegedly as S/N 0720 TR. He collected many original TR parts through the 1980s and had talented Dutch panel builder Alwin Hietbrink build a duplicate pontoon-fender body. The car was completed in early 1996 and in December of 2001 was offered at the Bonhams auction at Gstaad. As so often happens when big dollars are on the line, lawyers magically materialized and the Schouwenburg 250 TR was slammed with an injunction. The result was that today, the sole right to claim S/N 0720 TR is now with German collector Harold Mergard, with the frame from the ravine.

Adding to the drama, Lady Brocket had developed an addiction to prescription drugs and was caught forging a prescription. Then, after discovering that her husband had been unfaithful, she aided the police during their investigation.
The plot further thickened when it was determined that Lord Brockett had sold Jon Shirley of Microsoft 250 SWB S/N 3565 at a then “market correct” price of about $575,000, claiming it to be the original 250 SWB S/N 3565. The “real” 250 SWB surfaced in France and some detective work proved that Brockett/Shirley’s SWB was actually a well-done replica based on 250 GTE S/N 4015. Another two years was added to Lord Brockett’s five-year prison term.

Thanks to the ever-growing Internet and some very dedicated Ferrari “trainspotters,” the chances of a replica being sold as the real thing are becoming more remote. Today’s Ferrari buyers, be they entry-level or buyers of factory 250 GTOs, have learned to do their homework.

BANG FOR THE BUCK
When replica buyers call—and they do call often—my advice is always the same: Figure out exactly what you want to do with the car, don’t be in a hurry, and buy the best. I track almost 200 different 250 replicas in my database, from TRs, TdFs, SWBs, and California Spyders to GTOs. While the quality of their construction varies alarmingly, the best 250 replicas are exceedingly well done and offer excellent value to the enthusiast.

Many owners race, rally, or run touring events with their 250 replicas numerous times a year, pleasing themselves, race fans, and event organizers alike. While 250 replicas may not be the real thing, they are as close as most people ever get, and at a fraction of the cost. It’s more proof that there’s no relationship between how much money you spend and how much fun you have.