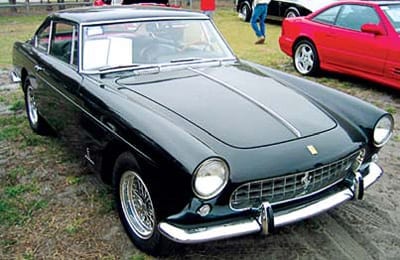 I get dozens of phone calls and e-mails from would-be first-time Ferrari buyers, and I always ask them the same questions: What’s your “real” budget? Do you have any idea how much to expect for maintenance costs? Have you considered the pros and cons of old versus new? Are you prepared to pony up for the necessary pre-purchase inspection? What’s your intended usage?

Most often, $100,000 tends to be the magic number for a first-timer, a sum that won’t get you into too much trouble with your spouse but is still enough cash to buy a real Ferrari. What follows is a summary of the current market favorites in this price range, along with some considerations that can help identify which car might be right for you.

The standard-bearer of the early V12 Ferrari is the 1960–63 250 GTE. Built at a time when a high performance sports car meant user-cruel, it was surprisingly easy to drive. Road & Track, in its August 1962 issue, wrote, “Anyone can drive one and enjoy the experience, the connoisseur who can afford one wouldn’t have anything else—this car is (almost) every sports car owner’s dream.”

While the 365 GTC/4 has its detractors, I feel the C4 is the best buy under $100k. When new, these cars were more expensive than Daytonas, and with only 500 built they are rarer as well.

At $75,000 and climbing for an exceptional example, the C4 can even be rationalized as “an investment.” A major service starts at about $5,000, but the “while-your-at-its” of new clutches, cam chains, water hoses, a/c reseals, new synchros, suspension bushings and shock rebuilds can (and will) quickly double or triple that amount. At least the C4 is simple enough that they can be worked on by anyone who is reasonably familiar with a Weber carburetor—and you don’t need a laptop to check anything.

First in the line of Ferrari’s new mid-engined supercars was the 365 GT/4 BB, produced from 1973–76. With only 387 made, it remains the rarest of the Boxers, and the quickest, thanks to peaky cams and short transmission gearing. A good running 365 Boxer is a rocketship, going through first, second and third gears with amazing acceleration and the wonderful sound of a very busy flat-12 with lots of carburetors sucking air. A good example can still be found for less than $100,000, but don’t hesitate if the right car comes along at a bit more, as this one is soon moving into six-figure territory.

The 512 BB came next, from 1976–81. With only 921 cars produced, carbureted 512s are relatively rare compared to Ferrari’s current production numbers. While not as quick as the 365 through the first three gears, the extra 600 cc certainly makes a difference on the top end, making the carbureted 512 the king-of-the-hill fastest of the Boxers. With ever-toughening emissions controls worldwide, Ferrari added fuel injection to the 512, creating the 512 BBi in 1981. Tuned for more low-end and mid-range performance, but a weaker top-end, the injected Boxers are more tractable in around-town driving. Through 1984, a total of 1,007 512 BBis were produced.

With room for the tallest driver, adequate air conditioning, light steering and excellent brakes, all Boxers are a driver’s delight. On the downside, while the balance and handling are good, once the limits are reached the car will swap ends without much warning on an over-exuberant or unwary driver.

The rather bland styling and concerns with certification (Boxers were never sold new in the U.S.) have kept values below those of the more attractive but less refined Daytona. But with Daytonas selling for $175,000-plus, a 512 BB or BBi at $75,000-plus is still a supercar bargain. Bear in mind that an engine-out service on these cars starts at about $6,000, with typical ancillary work easily doubling that amount.

The 1986–89 328 is relatively light and nimble to drive and beautiful to behold. Plus, it’s instantly recognizable as a Ferrari, an important factor for most first-time buyers. A 328 will give years of reasonably priced and entertaining driving, but as the final evolution of the 308, it is a 30-year old design with only adequate performance, braking and HVAC. Prices range from $35,000 for a high-miler GTB up to $70,000 for a 1989 GTS with ABS, convex wheels and low mileage. As the last of the V8 models that don’t require an engine-;out service, $4,000 should pay for your 30,000-mile checkup (as opposed to $7k-plus for later 348s, F355s and 360s).

The 348 replaced the 328 in 1989, the first mass-produced Ferrari with a longitudinally-mounted engine and unitized body. Unfortunately, the 348 had more than its share of teething problems, but improved as it evolved, with viable electronics, great a/c and a user-friendly cockpit. When 348 shopping, run fast and far from any car that hints at deferred maintenance. Coupes sell for under $50,000 now, while a great 1995 Spyder can be found for less than $75,000.

The F355 was the first Ferrari to feature a Formula One-inspired shifter, a desirable unit that has proven to be relatively bulletproof and makes the car a great daily driver. F355s have only two major problem areas: faulty exhaust manifolds and valve guides that tend towards rapid wear. For those not used to the world of Ferrari prices, an exhaust manifold for a 355 is $2,500, not including the labor to install it, and an engine-out valve job can run $10,000-plus. Expect to pay $50,000 for a 1995 Berlinetta with over 30,000 miles, while a 1999 Fiorano Spyder with F1 transmission and under 5,000 miles will take you outside this article’s budget at $125k.

The 456 GT is a technological marvel and will provide a great ownership experience for the Ferrari buyer with small children and $75,000-plus to spend. With a 48-valve, 4-cam, 5.5-liter V12 putting out 442 hp, the 456 offers staggering performance, blasting through the quarter-mile in 13.4 seconds at 107 mph, and topping out at 186.

The quiet, user-friendly cockpit, luxurious seating, easy-to-read gauges and six-speed shifter make driving a pleasure, while the a/c and heater are more than adequate. While the 456 may lack the soulful exhaust sound of the C4, its comfortable and quiet cockpit will make a 200-mile drive to your vacation spot a memorable experience, with no need to get out the aspirin or visit your chiropractor.

Overall, $100,000 should be plenty to get you a decent Ferrari, one that is good first step on the ladder that ends up at $15,000,000 GTOs. If after you own one of the above cars, it turns out the Prancing Horse is not for you, you haven’t risked much and can probably get most of your money back. If owning a 250 GTE makes you a 12-cylinder junkie, you’ve got the whole world of six and seven-figure cars from Maranello just waiting for you to wave your wallet at them.