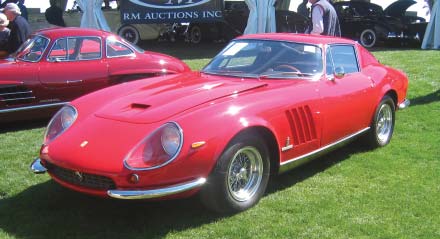 In today’s Ferrari market, the winners far outnumber the losers. As you might expect, the only cars that are dropping in value are the newer cars like the 612 Scaglietti, 360 Modena, and the 550 Barchetta. Just like a Caddy or Accord, the minute you drive a new Ferrari off the lot, it becomes a used car.

Vintage Ferraris, on the other hand, are going gangbusters right now, with huge jumps in valuation for even such previously lukewarm models as the 365 GTC/4. On the bigger-money end of the spectrum, things are looking even brighter, especially for those cars that are eligible for vintage events and tours.

In fact, we’ve seen so many Ferrari values double in the last few years that some are asking whether the madness of the late 1980s is back. (Values went through the roof in 1989 before crashing, leaving many buyers stuck with cars that were worth just a fraction of what they paid.) But before we answer that question, let’s take a look at which cars are moving the market.

DROPPING FAST
The only direction the market for late-model Ferraris is moving is down. While the asking prices for these cars remain high, the selling prices are, of course, much lower. For instance, a six-month-old 612 now sells at about $30k–$50k less than its window sticker of about $280,000.

Even the brand new F430 is soon going to be fair game for a hit on the secondary market. As I write this, they are being flipped for a $60k–$70k premium over their just-under-$200,000 window sticker, but as supply increases and the richest and least patient kids on the block have fulfilled their desire, expect this number to drop to sticker and then lower over the next 24 months.

HITTING BOTTOM
The good news is that time cures all ills, meaning that ten-year-old 456s are now fully depreciated at about $75,000, while a first-year 1997 550 Maranello is also more or less fully depreciated at $110k–$125k. If you can live with a $5,000-plus service bill every year, both models offer state-of-the-art supercar performance and creature comforts for what is, in the Ferrari world, a pretty low price.

The “high volume” models—308s, 328s, Boxers and Testarossas—are fully depreciated, and have little or no potential for appreciation. There are just too many of these cars for them to matter, and their costs of ownership are not really commensurate with their values.

EVENT-ELIGIBLE
The huge run-up in prices for “event friendly” Ferraris can be traced back to 1996, when Jean Sage and Jacques Swaters started the Shell Historic Ferrari Challenge in Europe, creating a factory-sanctioned event that showcased eligible historic Ferraris.

The prices for the best of the best immediately started climbing, with models like the 250 GTO, 250 TR, and 375 MM doubling within four years, re-doubling in the next four years, and then jumping again in 2005. Ultra-wealthy enthusiasts continue to seek out the most prestigious Ferraris to be seen in on European circuits.

The third level of vintage Ferraris are those that are less pricey but still eligible for events like the Tour Auto and Tour de Espana, models like the 250 Lusso and 275 GTB. These have doubled and continued to climb even higher in the last year. I sold a short-nose 275 GTB (S/N 7333) for $275,000 less than a year ago; today the same car would make an easy $375,000.

WHAT IT ALL MEANS
The common denominator to almost all Ferrari sales today is that most cars are going to real end-users who are buying their dreams and plan on keeping their cars. Rarely are cars going from dealer to dealer without a real customer in sight. Today’s buyers are far more patient and expect complete market-comparable surveys and evaluations before buying.

Unlike the late ’80s, we’re not in a Dutch tulip craze here. It’s taken 15 years, but the market is finally starting to show some strength across the board. The real question is, how long until outsiders with too much money and too few brains see the appreciation in prices, and decide they want some of this easy booty for themselves? When that happens, and happen it will, buckle your seatbelt and get ready for another wild ride.