Ferraris 65-Year Race to Save Weight 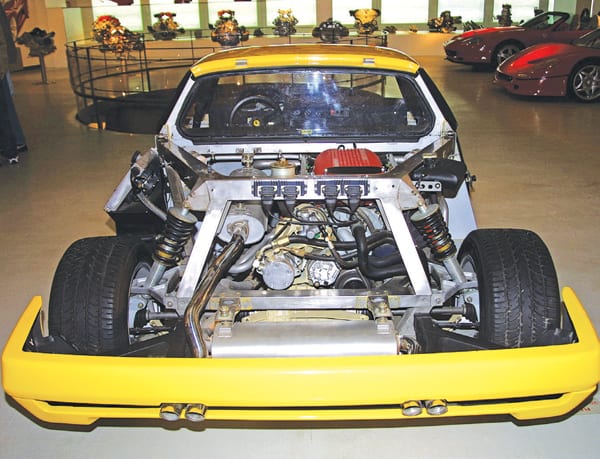 Ferraris 65-Year Race to Save Weight

Ferrari literally rose from the ashes of World War II in 1947 as a boutique race car builder armed with a diminutive pair of race-winning 125 Sports. The cars were light and fast, with a tubular chassis by Gilco and minimalist alloy bodies that were literally hammered out in local body shops. Gilco would provide Ferrari with street and race car chassis through the late 1950s while lightweight bodies came from a dazzling array of carrozzeria, including Touring, Vignale, Scaglietti, Drogo and a multitude of other smaller shops.

At the starting line
During the 1950s, state-of-the-art lightweight construction in both race and street cars was a steel tube frame with a simple tubular or boxed secondary structure that outlined the body shape. Alloy body panels were riveted to the tube frame

As Ferrari’s street car production ramped up in the late 1950s and 1960s, a combination of client demands for more luxury and production demands for higher volume shoved alloy bodies aside — and Ferraris got heavier. Steel bodywork —cheaper and faster to build — appeared. Creature comforts such as heaters, power windows and A/C added ever more weight.

But Ferrari — and other car builders — still wanted to win checkered flags, and that led to the next lap in the race for lighter cars.

Aluminum aerospace technology
Cutting-edge race car technology would lead to the next step in weight savings. The Lotus 25 Formula One car of 1962 was the first to incorporate an aircraft-inspired stressed monocoque chassis, which cut chassis weight in half.

The honeycomb aluminum chassis of the 1966 Ford GT40 “J” car and the Lotus 78 Formula One car both offered quantum leaps in lightweight technology, but they were not commercially viable for mass production. It would be more than two decades before alloy frame structure found its way to production cars.

Ferrari’s alloy chassis prototype
The first alloy chassis street cars were the little-known Ferrari 408 prototypes of 1987-88, built as a joint effort between Ferrari and Alcoa aluminum as a showcase for Alcoa’s new method of bonding lightweight, stamped aluminum panels with epoxy adhesives. The first 408, s/n 70183 in Ferrari red, had a semi-conventional stainless steel central monocoque with a two-piece (top and bottom) composite body bolted to the frame.

The second 408, s/n 78610, used Alcoa’s ASVT (Aluminum Structured Vehicle Technology) with shaped aluminum and aluminum honeycomb bonded with epoxy resin and the same two-piece body. Both cars also featured four-wheel drive using an innovative hydraulic system and an inline 4-valve, 4-liter V8 engine. Weight was usually given as 2,770 pounds, which was very light for the times.

The car’s alloy chassis, 4-wheel drive and composite body combo was exotic enough for Road & Track to feature the 408 as their cover car for the December 1988 issue as the prototype for the 328 replacement. After much testing, Ferrari felt the concept was too exotic and too complicated for production. Today, 408 s/n 78610 is in the Galleria Ferrari in Maranello.

Ferrari’s 408 was the first to test Alcoa’s alloy structure, but the 1994 Audi A8 was the first car to go into mass production with an alloy chassis, engine, transmission and suspension, which defined Audi at the leading edge in mass-market technology.

Ferrari’s 360 Modena, which followed in 1999, used the same technology, making it 3,200 pounds — 220 pounds lighter than the 355 it replaced. The 360 went from computer design to production in only two years, which is an example of Ferrari’s ability to roll out new models quickly and efficiently. The F430 of 2005 was also built in alloy, as the process was already in place, well-understood, well-amortized and an easy evolution of ongoing technology and tooling. The F430 also weighed 3,200 pounds.

Carbon fiber, from aerospace to exotics
McLaren Racing would take the next steps in lightweight technology. The John Barnard-designed McLaren MP4/1 Formula One car of 1981 was the first to use a carbon fiber tub and rear wing. Within months, other race car builders copied the design. MP4/1 was followed by Gordon Murray’s cost-is-no-object McLaren F1 of 1992, the first road car to use a complete carbon-fiber chassis. McLaren rejected power steering, power and anti-lock brakes, traction control and stability control, keeping weight down to a svelte 2,500 pounds. Just over 100 were built, priced at $1m each.

Ferrari’s moves
Ferrari followed the McLaren F1 in 1995 with the F50, which was built on a carbon-fiber tub by ATR Composites, which is near the Ferrari factory. The F50’s price was half the McLaren’s, but its weight was 2,700 pounds. The Enzo followed in 2002, but weight jumped to 3,000 pounds.

Carbon was now everywhere in the world of high-end exotic cars, and ATR built tubs for Ferrari, Lamborghini, Porsche, Bugatti, Peugeot and Maserati. Alas, ATR grew too quickly. When Porsche slashed production of the Carrera GT from 1,500 units to 1,270 units, ATR was hopelessly overstretched and thrown into bankruptcy. Ferrari and Lamborghini were forced to take partial control of ATR to continue production, but the demise of ATR slowed Ferrari’s carbon fiber planning and explains, in part, why the latest Ferrari 458 uses what is now old-school aluminum technology.

An engineer’s dream
Carbon fiber is an automotive engineer’s dream material, as it is moldable into any shape while delivering stiffness, strength, light weight and dimensional accuracy. As carbon fiber debonds under impact, energy dissipates in a uniform, progressive fashion for amazing crashworthiness.

At its peak, ATR’s goal was 20 tubs per day, but with multiple processes and a cure time of up to 45 minutes, the goal couldn’t match demand in the rapidly expanding European exotic industry.

As an aside, the high-gloss cross weave now popular in everything from computer cases to auto trim is strictly for show, as a dull, linear weave is far stronger and more flexible. In the aircraft industry, all weaving is linear. Just as chrome plating was the bling of the 1950s and 1960s, high-gloss carbon has become the bling of the new century.

Any failure in composite carbon fiber is a catastrophic failure, which means aircraft and structural components allow no room for any breakage. For an example of what happens when flawed carbon fibers fail, oneAustralia, an ultra-lightweight, carbon-fiber America’s Cup yacht, snapped in half and sank in minutes in 1995.

In the carbon-fiber exotic car world, heavy crash repairs usually require a trip back to the factory, where the original serial number plate is fitted to an all-new tub. This is expensive, but it is less than the cost to write off an F50 or an Enzo

Moving down the food chain
This column was originally inspired by a recent Wall Street Journal piece, which outlined General Motors’ plans to use carbon technology to lower weight by 20% in mass-market cars and trucks during the next few years. But don’t expect to see complete carbon-fiber chassis on mass-market cars.

There are different kinds of carbon fiber:
Very strong carbon fiber made in an infusion process is used for high-end exotic cars.

Less-complicated sheet-molding carbon fiber composites are used for non-structural car parts such as hoods or small “bling” parts. Sheet molding is currently used to build semi-truck noses, cabs and sleepers. GM will use the same process, but with more carbon, less resin and a one-minute cure time for non-structural parts, which gives more strength, less weight and higher volume.

Carbon fiber is going mainstream in mass-produced cars, but don’t expect to see these cars with complete carbon-fiber bodies. That race is still for expensive, high-end exotic sports cars.

Still winning the race
While the demise of ATR may have slowed Ferrari’s production plans, carbon fiber is now de rigueur in the exotic car industry.

My industry spies tell me that Ferrari’s replacements for the 599 and Enzo will redefine the industry standards for both lightweight construction and breathtaking performance. Ferrari’s next models are still in the race for less weight — and they will not disappoint.