Ferraris by the Numbers 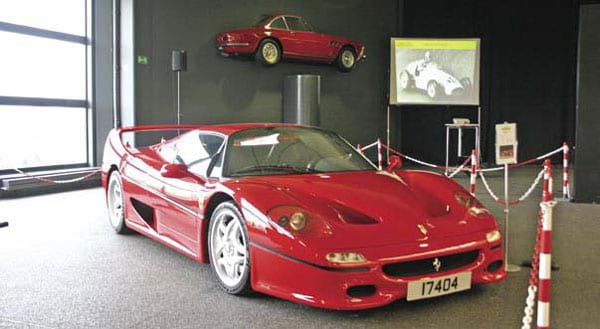 Ferraris by the Numbers

Trainspotters are an odd English subculture who first wandered into the moors in rain, sleet, and snow during the Victorian era, recording serial numbers painted on the sides of passing freight cars, passenger cars, and locomotives. This information was dutifully handwritten into ledgers and logs so the numbers, locations, and travels of virtually every train car in Britain could be tracked accurately. Once recorded, the data was then swapped by mail with other trainspotters and used to build a network of information far superior to that of British Rail. Only in England.

The Ferrari world has its own subculture of spotters, a few dozen people worldwide— including yours truly—who have dedicated much of their lifetimes to recording race results, interesting historical information, and ownership data for their favorite Ferrari models. Today those statistics are in databases, and swapped information crosses the planet in seconds by email.

Complications started early
In theory, every Ferrari is singular and has just one serial number. In practice, however, Ferrari has a long history of complicating the lives of its spotters. I first covered this subject in a 1989 article in Cavallino after selling 375 MM s/n 0362 to a Japanese customer who was more than mystified to learn that Ferrari had once swapped serial numbers of his race car. I had to explain that in the 1950s Ferrari was first a race team, whose singular goal was to win top level international series races, and second a manufacturer that covered the payroll by selling last month’s slightly used race cars to privateers who could win national level races. Because both factory and privateer drivers had a nasty habit of breaking parts and hitting things, demand often exceeded supply.

The imminent arrival of a paying (or heaven forbid, pre-paid) client to pick up his slightly used steed guaranteed that swapping serial numbers to get a car and client out the door was a necessity of business. To summarize the eight-page Cavallino article that unraveled the history of s/n 0362, in period it changed from 0362 to 0374 and then back to 0362, while a second car, s/n 0376, was renumbered to 0362, so that today two 375 MMs exist with a period factory claim to s/n 0362.

That ’60s haze
Fast forward to the 1960s and a pair of cars that have occupied much recent internet chat within our group—s/n 1287, the prototype for the 250 GTE, and s/n 2257, a 400 Superamerica with a one-off 250 GTE-style body. The prototype 250 GTE, s/n 1287, was registered by the factory on plates MO54083 on November 19, 1959, and featured seven small louvers in the rear sail panels, no side marker lights, and no louvers in the front fenders. It was tested extensively by the factory as the platform for the upcoming 250 GTE 2+2 then restamped to s/n 2257 and sold in September 1961 to Egidio Galbani, a personal friend of Ferrari, with Galbani paying for new and expensive Italian registration. This car is currently undergoing restoration in Italy.

Meanwhile, a second car bodied by Pininfarina to look like the upcoming 250 GTE—which should have been s/n 2257 in the build sequence—was built in November 1961. It was stamped 1287 in order to keep the prepaid MO54083 registration as used on the earlier “look-alike” 250 GTE prototype. This car was fitted with a 4-liter 400 SA engine, 1287 SA, and became the personal hot rod of Enzo Ferrari. This 250 GTE “look-alike” 400 was later sold to France where it was destroyed in a crash in Paris in 1972 and ceased to exist, aside from the engine (and to complicate matters further, s/n 1287 had been fitted with two different 400 SA engines during its testing).

I was recently offered a Ferrari 250 GTE with the s/n 1287. It was presented with the history of the 400 SA hot rod, which is certainly more valuable than the 250 GTE prototype. However, from the pictures that were sent along and the research I conducted, it was clear this s/n 1287 was the 250 GTE prototype, with a standard 250 GTE engine. As Ferrari’s personal car and as a one-off 400 SA, it would be a very attractive car. But as the surviving prototype 250 GTE, though desirable, it was not worth the price of a unique 400 SA. Which points out why it’s important to do your homework.

Confusion times four
The issue of confusion is not specific to vintage Ferraris. A client was recently offered F50 prototype s/n 99999 and came to me for info. A quick glance in the database and a few emails to our historians group confirmed there were at least two and possibly even four F50s with s/n 99999. One was a former press car at the Galleria Ferrari, another belonged to Jacques Swaters, former Belgian Ferrari importer, and a third F50 s/n 99999 was registered on a Channel Islands Guernsey plate 17404.

Looking through my voluminous notes under F50 s/n 99999, I saw that one of the spotters in our group noted every F40 and F50 has a tiny external number on the external door lock, and that over several years of spotting at dealers, events in Europe, and at the Galleria Ferrari, he had seen four different door lock numbers on four different F50s in four different locations, all numbered s/n 99999. For example, he spotted two F50s in Mugello on the same day, both with s/n 99999. One carried factory plates Prova MO2112 while the second had Prova MO2268. He was unable to get the door lock numbers.

Other notes showed the F50 with Guernsey plates (door lock number 325) also had the top of the windshield tinted, and it had a type shield behind the steering wheel, while the three other s/n 99999 F50s did not. The Guernsey car had a chassis plate on the steering column; the Swaters car did not. Ad infinitum.

Recent history no better
Another client called to offer his 550 Barchetta, proudly proclaiming he had production number 001/448, meaning the first of 448 Barchettas built. I replied by asking which 550 Barchetta with build number 001/448 he owned. Serial number 121680, a Euro car spotted at the Geneva Salon in March 2001, in red/black? Or perhaps it was s/n 123075, another Euro car spotted at the Pebble Beach Polo Field in August 2002, also red/black? Or maybe it was s/n 123652, although I knew that one was a Euro car finished in silver with dark red and owned by Jean Todt, former Ferrari F1 guru, numbered P1/448. I didn’t even mention the six pre-production prototypes built.

We spotters live in the age of information, and information coupled with an understanding of how to use it is a valuable thing. It clears the air, eases our clients’ minds, let alone our own. And it helps to provide added value to the cars in which we deal. In many ways, what we do is sell information. At least as much as we sell Ferraris