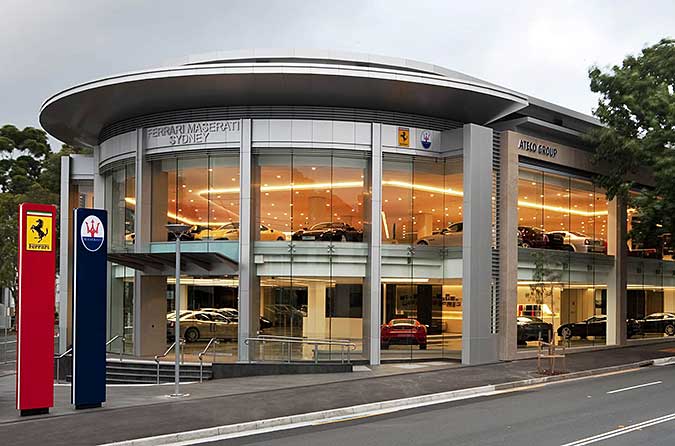 Laughing all the way to the bank
In recent years Bloomberg and others have reported on Ferrari’s very healthy profit margins, which average in the region of $70,000 to $80,000 per car. Ferrari alone in the automotive world reports adjusted earnings before interest, taxes, depreciation and amortization in the 25% to 30% range. These margins have been achieved by branding Ferrari as a luxury-goods company as opposed to merely another car maker. Veblen good base prices are merely the beginning. Obligatory options such as Scuderia Shields at $1,800; parking cameras at $3,500; Daytona style seats at $4,000; colored calipers at $1,500; carbon fiber driver zones at $7,500 (and the long list goes on) add an average of $70,000 plus to every new Ferrari sold, almost all going to Ferrari’s bottom line. Those obligatory options are scaled so they are obviously less for a Portofino but can hit nosebleed prices on the latest-greatest Pista!

Further down the automotive food chain, Porsche margins run about $20,000 per car while Mercedes and BMW margins run in the $10,000 per car range. Maserati margins are in the $6,000 range although that will go up thanks to the top-of-the-line Levante SUV. Stepping across the channel Bentley has had a bad year because of the developmental costs of launching the third-generation Continental plus the substantial long-term cost of electric car technology for a 200 mph luxury car with the weight and frontal area of an American pickup truck. Bentley also miscalculated the time and sales lost trying to comply with Europe’s new WLTP (Worldwide Harmonized Light Vehicles Test Procedure) making for losses of about $20,000 on every Bentley sold! On this side of the pond, Ford, GM and Chrysler are slashing passenger car production and closing factories. Conversely, as for the planet’s green-car flagship, Tesla has, thanks to the model 3, finally found profitability in the third quarter and will probably be profitable in the fourth quarter, the first ever back-to-back quarterly profits for Tesla.

Buying five minutes of glory
Ferrari’s move from a mere exotic car builder to a luxury goods company began under Luca di Montezemolo in mid-1998 with the introduction of the Carrozzeria Scaglietti Personalization Program on the 355, 456, and 550. The program began modestly by offering “Daytona” seats, modular wheels, fender-mounted “Scuderia” shields, and colored seat piping. With the introduction of the 360 and 575, the options list ramped rapidly upward, with Challenge grilles, carbon fiber interior, engine and intake carbon kits, and so on. Various other option packages were offered, such as the Fiorano handling package, or the Schumacher option for the 550, or the Sessanta package for the 612. Ferrari’s latest is the Atelier (or Studio) customization program, usually reserved for the buyers who want to pick out the options for their car at the factory. The options lists grew ever longer, and with the California introduced to the US market in late 2009, Ferrari further mastered the up-sell, giving each buyer his five minutes of glory checking off items on the options list, all in the name of personal exclusivity.

The man in black raises the bar
In preparation for Ferrari’s IPO in Oct., 2015, then-CEO Sergio Marchionne needed to extract as much value out of Ferrari’s existing product line as possible, all to help finance Fiat-Chrysler’s plans to compete on the global stage with the Toyotas and Volkswagens of the world. At numerous press conferences Marchionne declared that “Ferrari is a fully-fledged luxury brand,” and let the world know that he valued Ferrari at up to 10 billion €uro, (then $12 billion USD) putting Ferrari firmly into the Hermès and Louis Vuitton sector that trades at about 20 times earnings. Ferrari priced its initial public offering at $52 a share at the market close on 20 October 2015. The shares jumped 13% when they opened on 21 Oct., 2015, ending the day with Ferrari valued at close to $10 billion USD. Marchionne’s sales pitch worked wonders and today Ferrari’s shares (RACE) trade in the $99 range with a market cap of almost $18.54b.

Ferrari’s current market cap is just below the $22.20 billion valuation of its parent company, Fiat Chrysler, maker of Fiat, Chrysler, Dodge, Jeep, Maserati, Alfa Romeo, Ram Trucks and more. Ferrari’ total cash flow was $3.41 b with a net income of $535.4 million in fiscal 2017, vs. Fiat, which had $110 billion in sales with a net income of $3.49 billion in income! Thanks to its luxury branding, Ferrari’s top line is less than Fiat’s bottom line, yet the market has given almost the same market cap to both! To quote Massimo Vecchio, an analyst with Mediobanca in Milan “Those profit margins show how Ferrari fishes in the same pool as the luxury brands, it simply uses its cars as bait.”

Meanwhile on the front lines
Life can be good for a Ferrari dealer thanks to a 10% margin on new Ferrari sales and the possibility to get another 5% hold-back. Few get the full 5% because Ferrari deducts 1% from that 5% if that dealer carries other marques and another 1% goes away if the dealer has other marques under the same roof. Yet another 1% goes away if he doesn’t meet his quota for accessories, on-line training, doesn’t get enough of his clients to events and doesn’’t have his staff attend all the “recommended” training and marketing meetings. Yet another 1% is lost if he doesn’t meet his service or Classiche quota. Last but not least there’s another 1% if the dealer doesn’t meet his sales quotas. But wait, it gets better. If your local authorized dealer doesn’t sell an average (on a sliding scale) of $70k worth of “options” on every new Ferrari they are penalized. And nope, the sales department can’t make that up by selling an additional $70k worth of options on the next car, as their sales staff obviously failed miserably on the “no-or-low” option sale. A second showroom for a selection of “Classiche” Ferraris, bringing in lots of Classiche work and running a 488 Challenge team at all the Clienti Corsa events is good for extra points. Small dealers might get as few as twenty-five new cars a year, a mid-size dealer might get fifty new Ferraris a year and the major city dealers can get one hundred or more cars a year. The good news is that a Ferrari dealer can usually sell every car they get and more versus a Maserati or McLaren dealer who struggles to sell the cars in stock while the manufacturer urges the dealer to take ever more. As a comparison, McLaren allows a 10% margin on sales, with a 2% hold-back.

In 2002 Montezemolo issued a Fatwa that every dealer should sell used to new Ferraris at a ratio two-to-one, so a mid-sized dealer getting fifty new cars was expected to sell one hundred used, keeping that dealer’s sales and service departments busy while selling more Ferrari factory-supplied parts. To help get the used cars out the door Ferrari instituted the “certified pre-owned program” in 2002. To be “certified” a Ferrari had to have cam belts replaced within two and a half years or less. While the 355/360/456 and 550 did not have cam belt problems, they did have tensioner bearing problems. Ferrari found the most efficient way to have the tensioners checked was to insist on a mandatory three-year belt replacement, hence the beginning of today’s cam-belt service obsession. Few dealers make the “two used to one new” target.

The cost of keeping the lights on
Various dealers have described Ferrari’s other not-very-negotiable demands. For example all dealers are expected to throw a party for their best clients with a private showing of every example of Ferrari’s latest-greatest models, at a cost of $50k-$100k or more, paid for by the dealer. A mid-sized dealer selling fifty cars is also expected to hire a General Manager, a General Sales Manager, two dedicated Ferrari salesmen, a used car sales manager and a marketing person, all of which would devour much of his annual profit. All dealers are expected to make the pilgrimage to Europe three or four times a year, plus do a certain amount of Classiche inspections. Last, but certainly not least, every dealer is expected to have a spectacular chrome and glass showroom in the right part of town, with the factory-approved exterior and interior colors, floor tiles in both sales and service, the right lighting and so on, all of which can easily cost as much as $10m (or much more in some cities), all to sell fifty new and in theory, one hundred used Ferraris a year or about four new Ferraris and eight used Ferraris a month.

Once the spectacular chrome and glass showroom is built (in the right part of town) and the obligatory staff are hired, those costs are more-or-less fixed, so the only way to increase profits is to get one’s allocation raised. In a world where Ferrari builds less than ten thousand cars a year but allows larger dealers to open a second “satellite” showroom, the battle for one’s allocation can become very political. For those dealers who have checked all the boxes, are in the right big cities and know how to navigate the political minefield needed to get a hundred (some many more) new Ferraris annually, life can be good.

New buyer or bargain buyer?
Now that the reader can sleep well knowing his local dealer will somehow keep the lights on, the reader has to ask; am I a new Ferrari buyer or a slightly-used Ferrari buyer? Are the upfront lease costs, another $50k- $100k or more in instant depreciation as I drive out the showroom and another 10% or so in lost sales tax and license fees justified? How much will I pay for the smell of new leather on the tan seats with their contrasting red piping and red stitching and that carbon faced dash that I always wanted?

Those happy with last year’s supercar at a substantial reduction can find (relative) bargains, thanks to the miracle of depreciation, Ferrari’s endless supply of new-faster-better optioned supercars and no lack of short term leases pushing two and three year old Ferraris onto market. A 2014 Ferrari F12 that cost the first owner $400k out the door and now has 8k miles can easily be found on-line and can be your for about $225k or best offer. Too expensive? How about a Ferrari 599 that cost the first owner $300k plus and now has 8k miles? Yours on-line for $145k or, again, make an offer.

As the automotive world’s personification of Veblen goods, Ferrari’s new-car price structure clearly defies the normal economic laws of supply and demand. As the price increases, buyer demand also increases. Alas, with time some Ferraris depreciate far more than others, and so the question becomes, are all Ferraris by association “luxury-goods” or is a Mondial t still just a Mondial t?