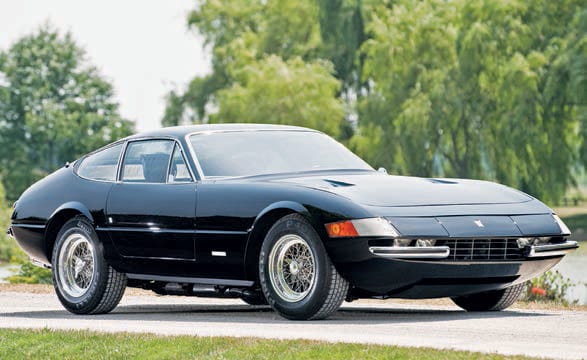 The Monterey auctions have again redefined the auction world’s segment of the collector car market, and, as usual, Ferraris are in the top tier of cars.

An auction room, like any other open market, can see prices change very rapidly — and sometimes for unseen reasons. These confusing sales could well be outliers that will not be duplicated for the foreseeable future.

Then again, we know there was a lot of money in the auction rooms this year, and billionaires tend to get what they want.

The buyer of the Dino s/n 7908 that sold for $467,500 is a well-known Northwest based billionaire and savvy car collector. It’s safe to speculate that billionaires worry less about $500k.

The seller of both the Chairs and Flares 246 GTS s/n 5820 and the Chairs and Flares s/n 7908 was a well known Southern California dealer who said that both sales were far beyond what he could possibly get on his showroom floor. Finally, the Europeans are bringing cars to the United States to sell.

So, why is this happening?
There are two perspectives on the ever-escalating prices for top-tier Ferraris. The first perspective is that the current boom in collector cars in the United States is very real, with money chasing best-of-the-best cars, be they a Chairs and Flairs Dino or an SWB California Spyder.

Across the pond, the top of the 1% in Europe are buying. Where else are they going to keep their “spare” money? Euros?

Continuing the positive, relative to the art market, cars are underpriced. When Monet’s water lily painting “Le Bassin aux Nympheas” sold for $80m in 2008, a Ferrari 250 GTO sold for less than 40% of the cost of the painting.

Now a GTO is worth $30m to $35m, while Edvard Munch’s painting “The Scream” recently sold for $120m and the Qatar Royal Families paid out a staggering $250m for the last privately held painting of Paul Cezanne’s “Card Players” series of four works. We can only rationalize that cars have been around for a mere 100-plus years. Art has been around a bit longer — thousands of years.

On the other hand, some very wealthy bidders seem to have no qualms about bidding whatever it takes to win an auction for a best-of-the-best car.

The competitive urge to show that they have the capacity to pay the price may outweigh some wealthy collectors’ desire to be prudent purchasers. As they are Baby Boomers (or older), they know all too well that our fastest depreciation asset is our remaining good health and the ever decreasing number of years we have left on this planet. So why not buy?

Finally, the number of classic cars is not growing, and Ferraris appear to be secure in their position at the top of the pyramid. This pricing tide does not raise all ships equally. Each has its own turn up the price-point ladder for many socio-economic reasons. At the moment, 330 GTCs and Dinos are the flavor of the month. If you’re in the Enzo-era market and not a billionaire, buy a Daytona, as their turn up the price-point ladder has not yet come.