Finding a Ferrari for $100K or Less 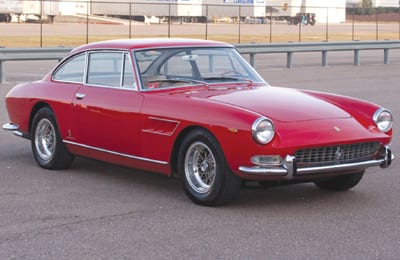 Finding a Ferrari for $100K or Less

This month our esteemed editor wanted to move away from the high-end Ferraris to the bottom-end world of affordability for mere mortals—perhaps he is still suffering from million-dollar-Monterey shock. My mission statement was: “Find the best buy in $100k or less for a modern Ferrari” along with the corollary “Would any of these cars sell for $50k next year?”

Let’s swim down to the bottom.

Like an old dog that never learns new tricks, I’ve been selling Enzo-era cars since 1974, when the only Ferraris were Enzo-era cars.

During those 35 plus long years, the Enzo-era Ferraris have remained the “Gold Standards,” and few-to-none of these cars are priced below the $100k threshold. The only exemption would be the two— and four—headlight 330 GT 2+2s, which live at the bottom of the Enzo-era food chain.

While these cars lack the classic lines of the 250 GTE, they do have 4-liter performance. The later, interim four-headlight cars have 5-speeds, and some of the last two-headlight cars were fitted with the additional option of power steering and air conditioning. Expect to spend $75k to $85k for a nice driver. Alas, a similar-condition 250 GTE or 365 GT 2+2 will cross over the $100k barrier, and there ends the under-$100k Enzo cars.

Unfortunately these early V8s are the first of the dreaded cam belt Ferraris. A cam belt service will cost 15% to 30% of the car’s purchase price every three to five years. Price of entry is $25k to $45k.

As for the Mondial coupes and cabriolets, the years have not been kind to these cars. Their values are abysmally low and their deferred maintenance issues are long. To quote Monty Python: “Run away, run away.”

The 348 brought Ferrari closer to the age of modern electronics, adequate air conditioning and world-class performance. Unfortunately, the 348 had more than its share of growing pains, while the wedge-shaped design lacked the appeal of the svelte 308s and 328s it replaced. The 348 was the wrong car at the wrong time, as the world economy and the high-flying Ferrari market crashed spectacularly in 1990, and went into a five-year freefall that only began to bottom out in 1994-95. Styling is bland, service costs are horrendous and so the price of entry is in the $35k-$45k range. Caveat Emptor.

Budget Fiat-era V12s and Flat 12s
While most people dismiss the 365 GT/4 2+2, the “carby” 400 GT and the 5-speed 412 because of their bland styling, no one can deny that they offer more than adequate performance, tolerable air conditioning, a user-friendly cockpit and semi-useable rear seats, all for $25k to $35k. Prices are a bit less for those who prefer to go shiftless with the 400 or 412 Auto. And the good news is that they don’t have cam belts.

The Flat-12 cars
The most collectable Fiat-era production cars are, of course, the BBs—the 365, 512 and 512 BBi. They are plagued with an $8k-plus, engine-out cam belt service every three to five years. Every would-be buyer wants that service factored into the sales price. A driver quality 512 BBi is just at the $100k mark, while the 365 BB and “carbed” 512 BBs are far beyond this column’s $100k threshold.

The Testarossa was introduced during a worldwide economic boom as a car that is legal in every country, thanks to standardized safety and emission laws. Fast, spacious and luxurious, the Testarossa is a great entry level Ferrari—if you can get past the 1980s “Miami Vice” styling. The best are under $50k. Expect $8k every three to five years for an engine-out cam belt change.

The 512 TR was a better car, but it was launched in 1992 in the midst of a world recession. This car was faster and much more refined than the Testarossa, and expect to pay $75k to $80k for a serviced car. The later F512 M is the last and best of the line, but is priced outside this column’s budget limitations.

Montezemolo’s user-friendly Ferraris
Fiat Chairman Gianni Agnelli appointed Luca Cordero di Montezemolo president of Ferrari in 1991. While the 456 GT is considered to be a Montezemolo-era car, the 456 GT was introduced at the FF40 Ferrari Celebrations in Brussels and at Spa in 1992. Obviously, the 456 was near production when Montezemolo took over. Having said that, the 456 GT was a great leap forward from the 400 and 412. The car has a quiet, user friendly cockpit, luxurious seating and no lack of power.

Montezemolo, Act II, the 355
The F355 was launched in 1994 with styling cues from the 308 GTB and the 288 GTO. This was a serious performance car, and the F1 gearbox offered an all-new driving experience. The now-standard list of options, such as a challenge grille, fender shields, colored calipers, drilled rotors and color-optional stitching, dash and steering wheel was introduced in late 1998. Faulty exhaust manifolds, leaking valve guides and expensive cam belt services have kept prices low. Coupes are well back of $50k, while the late F1 Spiders can be found for $60k. The 360 is a better car for not much more money.

The evolution continued in 1999 with the 360, which came with a three-year warranty, an indication of Ferrari’s faith in their all-new car. Thanks to an alloy body and frame—and a fresh 3.6-liter engine with 400 horsepower, the 360 was good for 185 mph, transitioning the V8 Ferrari to supercar status. The 360 was a sales success, but, with almost 18,000 built, they will never be collectible.

Like the 456 and 550, the 360 can be serviced with the engine in place, which cuts maintenance costs. On any given day, dozens are for sale with prices starting in the $60k range for a coupe and up to $100k for an early Spyder, making them the best car, best buy in a V8 Ferrari.

The return of the front-engine supercar
Thanks to covered headlights, a long hood, 250 GTO-style fender vents and a Daytona-inspired Kamm tail with two large, round tail lights, the 550 Maranello brought Ferrari full circle back to the legendary 275 GTB/4 and 365 GTB/4 Daytona.

With a 6-speed transaxle, 50-50 weight distribution and a 199 mph top speed, the 550 is truly a supercar. The 575 added an F1 shifter and even more power, and the car hit the magic 200 mph mark. Both cars have proven to be almost bulletproof. Expect to pay $65k for a serviced driver to $100k for a heavy optioned 575, which makes them the bargain supercar.

The need for due diligence
The good news/bad news is that every car in this article is fully depreciated and any further depreciation is only a matter of miles, the ravages of time and the never-ending cam belt services. This year’s price is next year’s price.

As always, the newer the Ferrari, the fewer the problems. While hope springs eternal, none of these cars has any chance of appreciation. All were state-of-the-art when they left the factory, but some have stood the test of time much better than others.

Be forewarned that buying a car with needs will make you regret you ever went down that path. Define your real budget, have a clear concept of maintenance costs and always get a pre-purchase inspection. Buy smart. Spend more up front. Be happy.