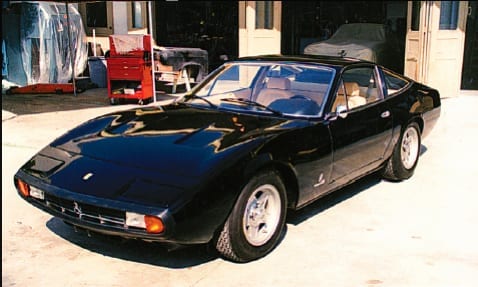 SCM readers are aware that our esteemed editor, Keith Martin, is once again on the hunt for a V12 Ferrari. Reading that he was looking for a 365 GTC/4, subscriber John Weinberger of Continental Motors, an authorized Ferrari dealer in the Chicago area, called him immediately. “Do yourself a favor,” he said. “Get a manual 1995 456 GT that’s just had a recent major service. It’s a better car in every way, you’ll have much less grief, and it is really a more pleasurable ownership experience for not much more money.”

And so Martin called your faithful scribe and asked his opinion.

In many ways, the 365 GTC/4 (the “C/4”) and the 456 GT are interchangeable. When new, both were built for the affluent buyer who wanted a top-of-the-line Ferrari with two occasional rear seats. What sets them apart from each other is over 20 years of evolution in terms of creature comfort and mechanical sophistication.

The 365 GTC/4 is an affordable front-engine 1970s V12 classic with, in my opinion, the best exhaust sound of any street Ferrari ever built. Its 24-valve, four-cam, 320-horsepower 4.4-liter V12 propels the C/4 through the quarter-mile in 15.7 seconds. With a 152-mph top end, it has enough performance to put the owner in jail in all 50 states. Power steering makes the C/4 user-friendly and the heater and air conditioning are adequate. The cockpit personifies the ’70s look with a large steering wheel, big gauges, a prominent shift lever and rear seats acceptable to human beings under 12 years of age. The C/4 is mechanically simple and can be tuned by a Weber-fluent technician. Best of all, you don’t need a laptop computer to diagnose anything.

At $50,000 to $60,000 for an exceptional example, the C/4 is fully depreciated and might even be rationalized as “an investment,” if one excludes the cost of maintenance. The C/4 is a visual and aural fashion statement for baby boomers who long for the 1970s, and with only 500 made you’re unlikely to have another one pull up next to yours in the parking lot of Il Fornaio.

Unfortunately the C/4 is now 30 years old, with mechanical, body and trim parts that have far outlived their original planned duty cycle. This makes the C/4 the Ferrari poster child for a very detailed pre-purchase inspection. A major service, should you need one, starts at about $5,000, and the “while-you’re-at-its” of new clutches, cam chains, water hoses, air conditioning reseals, new synchros, suspension bushings and shock rebuilds can quickly double or triple that amount.

The much-newer 456 GT is a technological showcase, and offers an ownership experience just eight years removed from what is currently available on the Ferrari dealer’s showroom floor. Like the C/4, it has diminutive rear seats. For $75,000 to $85,000, you get a 48-valve, four-cam, 5.5-liter V12 engine that puts out 436 hp and 398 pounds-feet of torque. The 456 offers staggering performance, blasting through the quarter-mile in 13.4 seconds and 107.5 mph, and tops out at 186 mph.

The user-friendly cockpit, luxurious seating, easy-to-read gauges and six-speed shifter make driving a pleasure. The air conditioning and heating are nearly up to world-class (i.e., Honda Accord) standards. And while the 456 may lack the wonderful exhaust sound of the C/4, its comfortable and quiet cockpit will make a 200-mile drive to your vacation home a memorable experience rather than a reason to get out the aspirin or visit your chiropractor.

A major service on a 456 starts at about $5,000 but can go up if you add a new clutch, shocks, etc. Because the 456 is more than 20 years further down the road of Ferrari evolution than the C/4, the potential mechanical and electrical problem list is shorter, and the dependability and parts availability are much improved. As with all Ferraris, a pre-purchase inspection is still mandatory, and with the 456 must include a leak-down and compression test, no matter how few miles the car may have. There have been more than a few disturbing reports of otherwise pristine 456s (and 550s and 355s) having serious compression problems due to valve seats poorly machined by the factory.

Since both the 365 GTC/4 and the 456 GT were built for the same potential buyer profile (albeit three decades apart), and both are very close in price today and nearly interchangeable in use, the bottom-line question is simple. Does our editor want to revisit his long-lost youth and experience the sounds and sensations of the classic Ferrari he couldn’t afford when it was new in the early 1970s, or does he prefer to move up to the world of the 1990s, with all of its technological and creature-comfort advances?