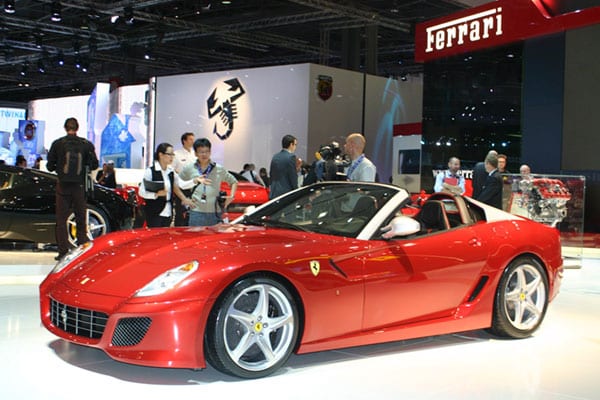 Collectability versus volume
Ferrari’s 599 SA Aperta, the convertible version of Ferrari’s 599 GTB, was introduced at the 2010 Paris Motor Show as a unique and limited edition model in celebration of Pininfarina’s 80th anniversary. Each 599 SA Aperta was delivered with a badge, most of which read “Limited Edition 1 of 80”, and to this day the Ferrari website still states “This is a special series model of which a strictly limited number of just 80 will be built”. Since we try to track every collectable Ferrari built, by serial number, it was easy to track a mere 80 unique Ferraris. In April of 2013 this author published the original draft of this article which disputed Ferrari’s claim of 80 cars built. This article is an update to the original article from April 2013. Thanks to the help of a few hard-core, obsessive-compulsive, trainspotting friends, the numbers tell the story.

A short history of Trainspotting
Trainspotters (or anoraks in Bristish slang) began as a unique English subculture of obsessive-compulsive individuals who first wandered out into the moors in the rain, sleet and snow in the Victorian era, when the rapidly growing British railway system personified British industrial power, recording the numbers painted on the sides of passing freight cars, passenger cars and locomotives. These numbers were dutifully entered into databases and spreadsheets so that the numbers, locations, and travels of virtually every train car in Britain could be carefully tracked. Once recorded, this information was swapped with other trainspotters to build obsessive-compulsive databases of trainspotting information. Today the Ferrari world has a similar tiny subculture of only a few hundred hard-core spotters worldwide, including yours truly, who have dedicated much of their lifetimes to recording race results, ownership data and other arcane information on their favorite Ferrari models.

F.W.I.W. in British slang, an anorak is a socially inept person, usually male, with an obsessive-compulsive hobby that includes tracking and recording incredibly detailed information on arcane subjects, such as trains, or cars, or airplanes, or luxury yachts, all of which is normally regarded as more than staggeringly boring by the rest of the population. This obsessive-compulsive knowledge of Ferrari history, ownership and sales data has been a major basis of our business model for the last four decades.

One serial number, one Ferrari; sometimes
In theory every Ferrari is singular, one serial number, one Ferrari. Alas the world of Ferraris is not that simple, as Ferrari has a long history of complicating the lives of Ferrari spotters. All race cars need a “Carnet” or passport with a basic description of the car, a serial number, and registration (license) plates to cross borders as many countries have high import duties. If the latest Ferrari race car was scheduled to race outside Italy and was wrecked in testing or at a previous race, it was easy to simply stamp the Carnet’s chassis number on a spare car and swap the registration plates to the spare car. Once that car returned to the factory race shop, it was usually re-stamped with the original number, but not always.

I first covered this subject almost three decades ago in 1989, in an 8-page article in Cavallino #57, pages 20–27. We had sold 375 MM s/n 0362 to a Japanese customer who was more than miffed to be told that Ferrari had once swapped serial numbers on the race car we had just sold him. I had to explain that in the 1950s Ferrari was firstly a race team whose goal was to win top level international races, and secondly to cover the payroll by selling last month’s slightly-used race car to privateers who could win national-level races. Because both factory and privateer drivers have a nasty habit of breaking parts and hitting things, demand often exceeded supply. The imminent arrival of a paying, (or Heaven forbid, pre-paid) client to pick up his Factory-new steed guaranteed that swapping serial numbers to get both a car and a client out the door was a necessity of business. To overtly simplify, in period, s/n 0362 was numbered from 0362 to 0374 and then back to 0362, while a second 375 MM, s/n 0376, was renumbered to 0362 so that today two 375 MMs exist with a period factory claim to s/n 0362!

As of this month, June 2017, the most current VINs are in the 228,000 s/n range, for a total of about 129,665 Montezemolo and Marchionni-era Ferraris built to date with another 150 plus new cars added every week. Ferrari has ramped up production from 4,487 cars in 1991 to over 8,000 cars in 2016, and will probably get to 10,000 cars a year in the near future. Alas, both word-count constraints and the need to sell a few older Ferraris to keep the lupine pest from the portals dictates that tracking each and every one of these cars is not for the faint of heart or possible in this article.

Fortunately for hard-core trainspotters, “the source” of newer Ferrari information is a fastidiously well-researched book, “Handbuch der Ferrari Seriennummern” by Matthias Urban, written in both English and German (in the same book). With 980 pages of fine print plus three supplements covering serial numbers from 001 up through s/n 194,614, an F12 Berlinetta, Matthias lists not only the cars built, but the cars not built. For those truly into the most arcane trainspotting, the book is a must-have. Unfortunately, the original book is sold out, but the database is updated on a quarterly basis and accessible for subscribers to F-Register.com. Contact Matthias at [email protected] or just visit f-register.com.

So how many 599 SA Apertas?
In 2011 our group had only 30 SA Apertas identified by serial number but by January of 2012 that number had grown to 66 confirmed. By May 2012 we had enough Apertas spotted to mention in a column, Ferraris and the Eurothat we then had 74 Apertas confirmed by serial number and another 30 or so spotted (but not confirmed by s/n) by trainspotting members of our Historian’s group. Two angry Aperta owners e-mailed in response to the column. When checked, one of those Apertas was already in our database, one was not, adding yet another Aperta to the slowly growing list. As of late April 2013, we have 90 Apertas confirmed by serial number and another 30 or so spotted, some of which might be duplicates of confirmed cars, so the guess in 2013 was that the total number of Apertas would eventually

We continue the Geek-Fest of analysis
For those into mathematical formulas, the US-Market normally takes about 27% of Ferrari’s worldwide production with peaks (above 40% in 1999) and drops (below 10% in 1996 and 1993). Both might be related to statistical errors, insufficient data or a “wrong” way of counting as the US-cars are marked as the new model year from the middle of the actual year but seem to be counted by the Factory as car from production of the actual year. Checking by individual models the “27%-rule” usually applies.

Last but not least in the 2013 analysis, with 120–130 Apertas then produced and 45 of those then known to be in the US, makes 37.50% of the production, a full 30% outside the usual model, indicating there were probably multiple more Apertas in other as-yet-undocumented markets.

Deciphering the Aperta’s Enigma Code
From the introduction of the prototype 599 SA Aperta s/n 171212 at the 2010 Paris Motor Show, Ferrari has played an interesting numbers game, as the prototype, s/n 171212 has the same s/n as a US model California that was sold new into Miami! Additionally, while the production 599 GTB VIN begins with ZFF60xxx the SA Aperta’s VIN begins with ZFF72xxx, which should make the SA Aperta singular, but the prototype SA Aperta’s VIN begins with ZFF65xxx, making accurate 599 SA Aperta number spotting even more difficult. Because the 599 SA Aperta used the higher performance engine from the 599 GTO, it can more correctly be called a convertible version of the 599 GTO, but information to date indicates that the Japanese version 599 SA Aperta uses a standard 599 GTB engine, adding yet another twist to SA Aperta spotting. Our list does not included the Superamerica 45 which is owned by Peter Kalikow, even though it carries a ZFF72Rxxx, SA Aperta-style s/n; but our list does include s/n 183980, which has a ZFF72 s/n and is identified as an Aperta GT, whatever an Aperta GT might be.

Additionally, the SA Apertas were sold to ultra-wealthy and very low-profile Ferrari owners who were proven buyers of all the latest-greatest Ferraris. Most rarely go to Ferrari related shows or events. One can only guess at how many SA Apertas have gone to ultra-wealthy Chinese, or Koreans, or Southeast Asians, or Russians, or middle-Easterners, all far off the usual radar screens. The Sultan of Brunei and his family, for example, bought the latest-greatest of anything in groups of five, so they will probably have several, all far off the radar screens. When introduced, the base price started at $515k USD but quickly hit $600k USD with the usual options. Because Ferrari clearly claimed that only 80 cars would be built and that each car was pre-sold, prices rapidly escalated, recently hitting the $1,5m USD range.

Searching for the bottom line
Today a 200-plus mph top speed is obligatory in everything from Astons to Zondas, yet few racetracks are long enough and even fewer public roads are straight enough and traffic-free enough to exercise an SA Aperta anywhere near its limits. Furthermore, every mile added will deduct many thousands of dollars from its perceived value. Like a septuagenarian or an octogenarian dating a Brazilian supermodel, there’s a massive disconnect between ownership and usage. As of June 2017, our group now has 138 total 599 SA Apertas confirmed by s/n but there are more, our current estimate is 150–160 in total. Since the collectability of anything, be it Ferraris, coins, stamps or whatever, is in large part inversely related to the number built, the current market price for the SA Apertas, in the $1.5m range, seems to defy economic reality. The 599 SA Aperta has become what Economists call a “Veblen good”, where demand increases as the price rises, an obviously contradiction of the normal laws of demand. Please e-mail us if you have an SA Aperta, we’d love to know if it’s on our list.

Thanks to Stan Nowak and Gerald Roush for their inspiration decades ago and to Matthias Urban, Victor Gaillard and Tibor Somlo, Aperta spotters, to Manfred Lampe, the Carnet specialist and to the hard-core members of Ferrari Historians. We welcome any feedback, corrections or additions from any and all Aperta owners or spotters.