Importing and F50: A Tragi-Comedy in Two Acts 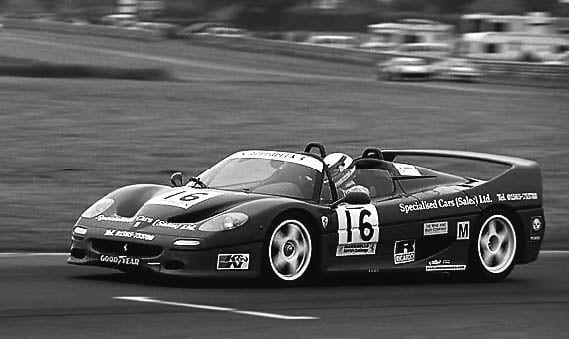 Importing and F50: A Tragi-Comedy in Two Acts

In 1998 Ian Hetherington, an English software mogul, decided to race his Euro model F50 in the Ferrari Maranello Challenge. He raced Ferrari F50 S/N 103496 in six of the twelve Maranello Ferrari Challenge races in preparation for an assault on the 1999 championship.

For 1999 Hetherington and F50 S/N 103496 returned for 13 of the 14 rounds of the championship. With three first and three second place finishes, they ended the season second overall, missing the championship by a single point.

On October 2000, S/N 103496 was sold to a retired American driver who still owns a substantial collection of cars he once raced in the IMSA series. On November 1, in preparation for its early November arrival in the US, a package detailing the race history of this car, with many supporting photos, was prepared and sent on to the EPA and DOT requesting approval as a race car entry, exempting the car from the usual EPA and DOT regulations. No problems were expected; after all, what better defines a race car than “a car that has raced.” And with 39 races, F50 S/N 103496 would seem to more than define “race car.”

On November 2, DOT requested proof that the new owner was a qualified race driver. Simple enough; copies of his racing licenses and detailed photos of the car provided by Mortimer, Houghton, and Turner Ltd., the authorized Ferrari dealer which had supplied the car, were sent to the EPA and DOT.

On November 2, we also retained Lance Beyer, a former lawyer for DOT with many years of experience dealing with them, in an attempt to interface between the entrepreneurial spirit of the Ferrari world and the mindset of Federal bureaucracy.

On November 3, after review of the photos, DOT requested a statement from MHT Ltd. confirming that the car was a race car, had raced in 39 separate races, and that its intrinsic value was as a race car and not a street car. MHT Ferrari supplied the appropriate letter.

On November 15, DOT contacted Ferrari of North America and asked if Ferrari had ever built an F50 race car. FNA replied in the negative and so we were advised by DOT that, since Ferrari had never built an F50 race car, this car could not be recognized as a race car. DOT was then supplied with copies detailing the presentation of the first F50 GT (which had received DOT/EPA exemptions), which DOT considered to be an evolution of the F50, into the US as featured on the cover of Cavallino magazine issue 100, the Ferrari Market Letter, and Forza issue 16.

DOT accepted that their source at FNA had erred and another hurdle was cleared.

Upon reviewing the letter describing the car supplied by MHT Ferrari, DOT next decided they needed a letter from Specialised Cars, the company that prepared this car for racing, listing the work done and stating its position that this car is indeed a race car. On November 17, the letter was supplied and approved. Two more weeks gone.

After receiving the letter from MHT Ferrari, DOT then decided they needed a “stronger” letter, which was dutifully supplied on November 20. DOT next decided they needed confirmation from the race organizer that Specialised Cars was qualified to do the work described in their letter outlining the conversion of F50 S/N 103496 from a street car to a race car. On December 8, DOT was supplied with a letter from John Swift, director of the Maranello Challenge Series, outlining Specialised Cars’ qualifications.

Working their way up the organizational chain, DOT asked for a letter from the Maranello Challenge sponsor, Maranello Concessionaires, that Specialised Cars was qualified to prepare race cars and confirmation that this car was recognized as a race car. Thanks to John Newman, General Manager of Ferrari UK, the letter was supplied on December 8.

In anticipation of what might come next, on December 18, I asked Art Zafiropoulo, owner of F50 GT S/N 001, to provide the import paperwork showing his F50 GT’s importation under the race car exemption. This was sent to EPA and DOT.

Now past thirty days in storage with US Customs, it was necessary to put the car into bonded storage rather than have customs seize the car for lack of clearance paperwork. The costs of importation climbed.

On January 2, DOT next decided they needed “current” photos detailing the many modifications made to convert the car to racing standards. On January 8, with special permission from US Customs, Al Roberts of Shelton Ferrari photographed the car in a dark and dusty warehouse and sent the requested photos to DOT.

Our attorney was able to narrow down DOT’s concern to one area, that of intent. DOT’s mindset was “what was the main intent of the manufacturer when the car was built?” In layman’s talk, we “only” needed to prove the car was r-manufactured as a race car, and DOT would approve the car.

On January 25, we supplied DOT with a very detailed letter from Specialised Cars outlining the costs of remanufacturing this car as a race car and the greater costs needed to reconvert it back to a street car, making its use as a street car financially impractical.

On February 1, DOT asked Al Roberts of Shelton Ferrari to go back and take better photos showing the ride height by putting a ruler up to the bottom of the car, along with clear photos of the fuel filler opening. Additionally they also wanted a letter from Shelton Ferrari repeating what was already stated by Specialised Cars in England.

February 8, Tom Shelton of Shelton Sports cars provided a detailed cost analysis letter to DOT about the costs of re-conversion.

The next day, DOT agreed to release the car.

February 22, DOT typed the letter releasing the car. End of Act One.

Next month, Act Two: EPA wants to know if a can of Coke will fit under the F50.