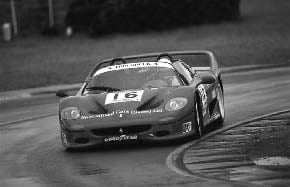 In the last issue of Sports Car Market, we reviewed the byzantine process of importing a Ferrari F50, S/N 103496, which had been converted to racing specs and was last year’s winner of the European Maranello Challenge.

After a mere three-and-a-half months, DOT decided our F50 was indeed a race car and acceptable for importation into the US under the race car exemption.

The release letter from DOT was received on February 22nd of this year, and we expected EPA to rubber stamp DOT’s decision. This proved to be supremely optimistic on our part; EPA decided to ask the same questions as DOT, in rephrased or reworded bureau-babble.

For instance, while DOT had wanted an explanation of the work done to convert this car to a race car, EPA on February 2 asked for a breakdown of the estimated cost to convert the car back to a street car. This is because DOT is concerned about the intent of the car’s manufacturer, while EPA focuses on the roadability of the vehicle.

On February 6, Specialised Cars, in England, which had prepared the car for racing, provided a detailed letter outlining the substantial cost to convert the car back to a street car. They also stated that, because of its history, converting this well-raced F50 into a street car would be financial folly.

On March 18, EPA asked why the car sat high off the ground. On March 19, Mortimer, Houghton and Turner (MHT), an authorized Ferrari dealer in England who sold us the F50, supplied a letter explaining that the car was raised as high as possible on its adjustable suspension and fitted with the taller rain tires to prevent damage in shipping. EPA was not satisfied with this explanation. They decided that the car had to be lower to be accepted as a race car.

On March 30, US Customs allowed the F50 to be taken to Shelton Ferrari of Fort Lauderdale, Florida, to be lowered from its transportation settings and pass the Coke can test. Shelton lowered the suspension and fit racing slicks into place, lowering the car by 3 inches. Digital photos of the car passing the Coke can test were dutifully submitted to EPA.

On April 23, EPA stated that since digital photos can be altered they needed “hard” photos of the F50 passing the Coke can test, along with a statement from Shelton Ferrari affirming the car to be in race condition, the tires to be at racing pressure and to have had no additional weight added. Glossy 5″ x 7″ photos and the appropriate cover letter were sent to EPA.May 15, the car passed the famous Coke can test, but was kicked sideways to Len Lazarus at EPA, and he expressed his concern that this F50 looked just like any other F50 and that EPA had already turned down previous requests to import F50s as race cars. Lazarus wanted photos substantiating that the car had a “racy looking” dashboard and interior. Once again, new copies of photos already supplied to both DOT and EPA were obtained from MHT Ferrari in England and dutifully re-supplied to EPA.

On May 29, the F50 passed the “racy looking” dashboard test, but still had to pass a roll cage test, since EPA had decided that real race cars have roll cages, not roll hoops. Attorney Beyer discovered that EPA had already allowed entry to two F50 GTs under the race car exemption, and asked if we were to build a roll bar to match the bar fitted to the F50 GTs already imported, would this final test appease EPA?

On June 2, EPA denied they ever allowed the two F50 GTs to be imported, as they had no records of these cars. Therefore, these cars must have been smuggled. We advised EPA that we had already sent exhaustive information on the two F50 GTs already imported but were told “the file is too thick”to take the time to go through. If we wished to prove the two F50 GTs were legally imported, we must re-send the paperwork on these cars to EPA. We resubmitted the Customs and DOT paperwork, and EPA subsequently agreed that two F50 GTs were indeed legally entered.

On June 15, we forwarded e-mail and detailed digital photos from Art Zafiropoulo, owner of F50 GT S/N 001, concerning the roll cage in his car. On June 18, Len Lazarus reviewed EPA’s importation file on the Zafiropoulo car. He agreed EPA would generate a final “this is what you have to do to gain approval” letter.

As of July 15, we have still not received this letter. Their ineptitude and malice have cost my client months in delays, not to mention storage, customs and rather staggering (although hard-earned) legal fees, as well as any refurbishing costs required due to the months spent in storage.

I would like to be able to write a happy ending to this story. But given past experiences, I expect to receive a letter with a new set of repetitive, unjustified and expensive-to-meet demands any day now. From our perspective, a reasonable test to determine whether an F50 is actually a race car would be to see how quickly it could roll over a group of EPA bureaucrats.