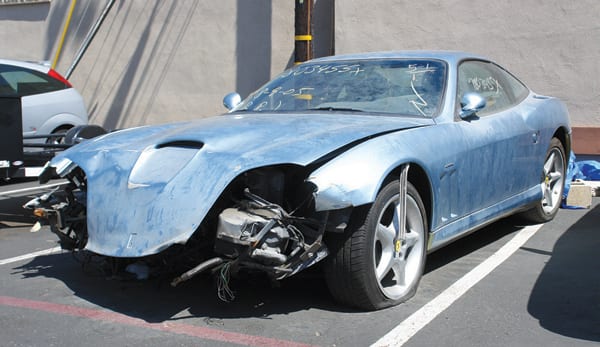 I recently received an email regarding a 430 Scuderia that had hit a deer, with the damage described as “very lightly hit, the bumper is scratched and the hood is lightly dented.” Further emails stated that the owner, who was a passenger in his own car, felt the diminution in value to his 430 because of the damage should be $100,000 over and above the cost of the actual repairs, and he expected the driver’s insurance to cover his extra “loss.”

Two distinct schools of thought
There are two distinct schools of thought on diminution in value: Some owners and their always-eager lawyers are advocates of compensation, while the insurance companies are equally adamant that when they pay to repair a damaged vehicle, if those repairs are to “as-was, or better” condition, then there is no diminution in value just because the vehicle was involved in an accident. The insurance companies believe that if it’s a car, it will be driven, and if driven enough, it will get into accidents. That’s simply what cars, and their drivers, seem to do.

As someone who owned a shop specializing in Ferrari crash repair for well over two decades, I was usually on the side of the insurance companies. Many hundreds of Ferrari repairs over that time demonstrated to me that all Ferraris left our shop in better condition than they were prior to the accident and so benefited from betterment, the direct opposite of diminution. Simply put, owners wanted their money’s worth and expected their cars to come back better than pre-accident condition, even if they weren’t writing the check. As a shop owner, my goal was to meet or exceed a customer’s expectation.

Let the litigation begin
Alas, we live in a litigious society that churns out far more lawyers than it does engineers, and each new lawyer feels he has a right to a six figure income, a new BMW, and an upscale condo right out of law school. So a relatively new industry of specialized law firms has developed in America’s more affluent areas. Demands for compensation above and beyond the actual cost to repair the vehicle, alleging the value of the vehicle has decreased due to its Diminished Value, are becoming more commonplace today.

First we need to understand the rules of the game. While first-party claims for diminution of value (you are driving your car and you have an accident) are covered, juries are unsympathetic to diminution in damages for something you caused yourself. Third-party claims (someone hits you) are easier to prove diminution in value, which fall into three parts.

The most common is Inherent Diminished Value, the position that any damaged vehicle will have some measure of inherent diminished value—a monetary loss to the vehicle owner. If you have a 599 or 430 and you are hit (hopefully by someone with good insurance), you will collect some level of diminution in value. If you’re in a “driver quality” 328 and you’re hit front and rear, requiring a complete repaint, new bumpers, etc., you might have to pay betterment, a small percentage of the cost to paint the undamaged area of the car.

Last up is Insurance Related Diminished Value, a loss in value due to the insurance company failing to pay to repair a flaw or defect listed on the repair estimate. Another very hard-to-prove position; as in almost every case, if the shop can show repairs are required, the insurance company will pay a reasonable repair fee. Insurance companies are, by definition, in the business of repairing damage at reasonable costs and have no desire to go to court, as they know from millions of claims that in most cases the only winners are the lawyers.

When is it a total?
The industry rule of thumb is that most insurance companies will spend up to 75% of the retail market price of a vehicle for the repairs, under the theory that the salvage value is normally around 25% of the pre-accident retail value of the car. If your car is on the edge, with close to 75% damage and you want it totaled, the insurance companies will usually cooperate. If totaled, you will usually get 100% of the retail value, plus sales tax and some percentage of registration fees. You will not get any diminution of value at a 100% settlement.

As for a “loss of use” claim, is a Ferrari owner entitled to an identical car while his Ferrari is being repaired, or just a very nice car? Most insurance companies will fight like cornered rats against an owner renting or leasing another Ferrari, Lambo, etc. while repairs are being made, and they likewise fight against giving an owner a “loss of use” rate that reflects what it would cost to rent/lease an identical car. Insurance companies do this knowing that Ferrari owners almost always have other cars they use for their normal driving, and that juries often have little sympathy for someone who makes such a claim.

Just as there is a small world of lawyers who specialize in diminution of value, there is also a small world of expert witnesses who go to court to defend their client’s position, be it pro— or anti—diminution in value. The International Society of Automobile Appraisers has published a sliding scale for Inherent Diminished Value. It starts at 10% for cars under $10k and goes up to 40%–50% for cars over $150k, although in the end every case is a unique roll of the dice, with the owner and his lawyers betting the insurance company will blink and settle before you get to court.

I don’t take on diminution cases unless I feel one party is being extremely unreasonable, be it the owner or the insurance company, as my day job pays much better than sitting in a courtroom. However, having been down that road, I’m still stunned by the vagaries of the jury system, and will never forget a jury of retirees from a mobile home park who ruled against a car owner simply because they thought no one had a right to own a car that expensive!

It is logical that if a car is repaired to its pre-accident condition, there should not be any diminished value, but used car buyers are often illogical. Given the choice between two identical used cars, though one is accident-repaired, most would choose the car that is accident-free. And so, if you have a 599 that suffered a $100k hit at the hands of a joy-riding parking attendant, you will almost certainly collect that $100k in diminution in value. On the other hand, if you have a 50,000-mile driver 328, you are almost certainly wasting your time. The older the car, the higher the miles, or the lower the value, the less chance for compensation. The bottom line is that be it a 599 or a 328, unless there is major damage, you are usually fighting for nuisance value money.