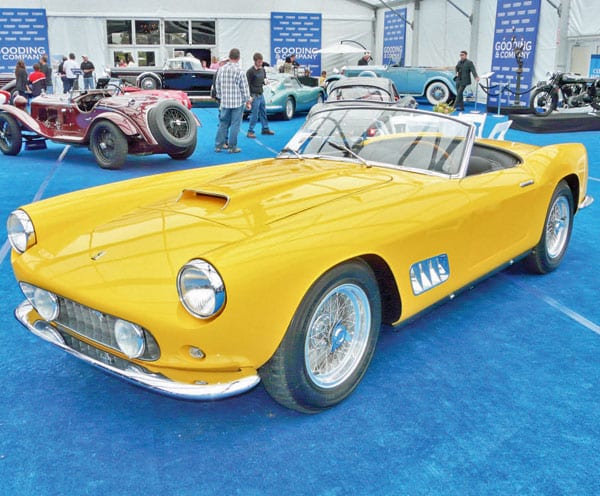 Top-end Ferraris soar by 50 percent
Looking at the Big Ferrari picture, the average high-end Ferraris sale price was up by an eyebrow-raising 35%. In 2010, there were 14 Ferraris sold for more than $1 million, with prices totaling $36.5m at an average sales price of $2.6m. At this year’s Monterey auctions, there were 13 Ferraris sold at more than $1 million, with total sales of $45.5m — and an average sales price of $3.5m.

Multiple high-end sales were beyond expectations, a pair of modern race cars was weak, but across the board, most Ferrari sales were strong, especially at the top end.

Gooding’s sale of the 1957 Ferrari Testa Rossa prototype, s/n 0666 TR, brought a new world record auction price of $16.4m with commission. This Testa Rossa had a well-known ownership history from new, was raced as a factory car in period and was Ferrari Classiche-certified in 2008. Bidding started at $10m and quickly passed $13m to resounding applause. The final $16.4m total beat the previous all-time high seller — another ‘57 Ferrari 250 TR, which sold for $12.4m at RM’s Maranello auction in May 2009.

For those who track Ferrari minutiae, s/n 0666 TR was sold to a pair of college professors in 1972 as a burned-but-rebuildable wreck for about $2,500. Once restored, it was on the show circuit through the late 1990s before being sold in January 1998 for $4.5m on the 48-month payment plan.

Only five years later, it was sold to a senior ex-Microsoft executive for about the same price. He was the happy seller at this year’s auction.

Over-the-top sales
Another over-the-top result at Gooding was the “barn-find” 1966 alloy-bodied 275 GTB, s/n 8163, which sold at a “where-do-you-go-from-here?” $1.54m. When one factors in the mandatory cost of restoration, there will be no upside for many years. On the other hand, the new owner now has a “car with a good story” with a “lost-in-time” story.

RM’s over-the-top Ferrari sales included the 1960 Ferrari 250 GT SWB Berlinetta Competizione, s/n 2209, for $5.28m. This was a strong sale, as s/n 2209 had a mediocre race history, was crashed and rebodied by Drogo in 1967, stolen and recovered and then rebodied as a Comp 250 SWB by Grand Prix Metalcraft in England from 1980 to 1983. (In today’s Internet world, there are no secrets, which can only lead me to assume that the buyers in Monterey had done their homework and were happy to pay for what they got.)

Old cars, new cars and no-sells
Reflecting the strong across-the-board market, Gooding got big prices for two early coachbuilt Ferraris: the 1950 195 Inter Coupe, s/n 081S, which sold at $990k, and the 1952 225 S, which sold for $880k. While these are rare and unique “one-off” early Ferraris, they are simply not a lot of fun to drive, which made their strong prices a surprise.

Strong at the top — again
More than ever, Monterey 2011 demonstrated a strong and liquid market for the highest-quality Ferraris, with RM and Gooding competing for the best cars and the highest prices. The lesser cars went to Bonhams, Mecum and Russo and Steele. The prices for top-notch Ferraris certainly defied the planet’s overall economic climate. Do they show a rush to “pride-of-ownership collectibles”?

It’s clear that a lot of aging Baby Boomers are buying and enjoying really big cars and a lot of buyers just don’t worry about the relationship between the financial markets and the collector-car market.

While Sports Car Market doesn’t mention subscribers’ names, several of this year’s top-end buyers are members of the Forbes 400, and membership to that club starts at over $1 billion.

Following the Ferrari money
We continue to have four diverging markets in the Ferrari world.

The deep-pocket players are cheerfully shifting what can only be described as very discretionary income into high-quality collectibles, such as the best-of-the-best Enzo-era Ferraris, which are steadily moving up.

The bottom — which remains flat to down, and includes lower-tier Ferraris, such as the 308s, 328s and others — goes to players with fewer assets who are focusing on preserving their limited cash.

The Montezemolo-era cars only go down.

The lasting lesson of Monterey 2011 is that buyers with massive discretionary income are clearly lifting the top end of the market.