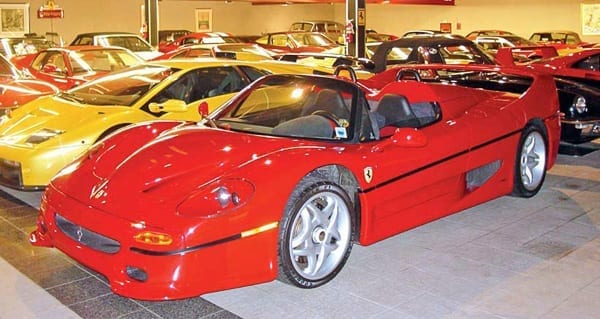 Collectors are fetishists who keep like-kind things; stamps, bits of string, samples of different types of barbed wire—or vintage Ferraris. Recently a new type of supercar collector has emerged who’s broadening the boundaries of the hobby.

Ferrari collections focused around 1950s, ’60s, or early ’70s coachbuilt or racing Ferraris, under the theory that Ferrari stopped building “real” Ferraris with the Daytona. Thanks to Fiat’s influence in the early 1970s, the 512 BB, Testarossa, 400i, 412i, and V8-engined 308s, 328s, and 348s were often more user-friendly but lacked panache and raw performance, and their desirability faded. Diehard collectors were often serious engineers—which additionally made them quite often the best mechanics to work on their own cars.

WANTING TO BE ONE UP
The new breed of younger, newly rich collectors all want to be one up on the next guy. They may not even be “car guys” but have a 288 GTO, an F40, an F50, and an Enzo, and they’re interested in super exotica such as a 288 Evoluzione, an F40 LM or LM GTE, a 333 SP, an FXX, a Maserati MC12, or a McLaren F1. While the old-time collectors started with MGs and Jaguars and worked their way up to Ferraris, the new guys just start out at the top and buy what’s the fastest.

All of these supercars offer more raw power than most of the owners can use, so performance becomes subjective. While an Enzo is much faster than an F40, the F40 feels faster because of the sudden punch of the turbos, the wheel spin, and the feeling of running on the edge, thanks to a lack of traction control, active aerodynamics, launch control, and other driver aids standard on the Enzo.

As an example of how user-friendly the latest supercars have become, one of my American clients has an F40, an F50, an Enzo, and anything else he wants. He bought a new M-B SLR McLaren. After driving the 626-hp SLR and the 478-hp F40 back to back, he shipped the F40 to his local dealer because he felt the turbos were not kicking in. The dealer said the F40 was working well, he was just spoiled by the SLR.

The sophistication of new supercars makes Formula One speeds more accessible, and that thrill drives the new collectors. A few make time to compete in top-level GT or single seater series and learn to drive close to their cars’ performance levels. But most are too involved in business for that much focus, so they hire top-level drivers for track events and enjoy racing speeds from the passenger’s seat of super-exotica such as an F40 LM or a 333 SP.

THE NEW COLLECTORS
There are dozens of new collectors around the world, such as Tony Raftis in Australia, Rusty West in the U.S.,Bernhard Dransmann in Germany or Mehmet Rustu Basaran in Turkey. Virtually none have any interest in 1950s, ’60s, or ’70s Ferraris.

Raftis is an Australian computer guru who made millions importing IBM equipment. Besides just his supercar stable, he can go even faster in his half-dozen WWII fighters.

Dransmann made his fortune in real estate and the family furniture business. He has raced in various pro racing series in Germany including the World Sports Racing Prototypes, driving a turbocharged Ford Escort in the early-mid 1980s. He owns a 288 GTO, F40, F40 LM, F50, Enzo, and FXX.

DRIVEN BY PERFORMANCE
The performance edge has always driven Ferrari collectors, even back to Carl Bross—perhaps the first serious Ferrari collector—who was convinced by Dick Merritt in 1965 that he should snap up old Ferrari race cars. Thanks to family money, Bross owned 340 Mexico S/N 0224AT, 375 MM spyder S/N 0370, 375 Berlinetta S/N 0416, 410 Sport S/N 0598, and multiple other 1950s super exotics. But while Bross had the best collection of significant Ferraris, he rarely used them.

Other early collectors included Norman Silver, Briggs Cunningham, Bill Harrah, and J. B. Nethercutt in the U.S., Pierre Bardinon in France, Anthony Bamford in England (who bought Bross’s cars), and Albert Obrist in Switzerland. All these collectors bought old Ferraris because the cars were cheap and plentiful, and virtually all were purchased for less than $5,000—25% of the cost of a middle American home in 1970.

The age of the collection is a moving target. Cunningham, Harrah, Nethercutt, Bamford and Montagu were buying last year’s, or at most, last decade’s model. When I started collecting Ferraris, Comp Daytonas were still charging down the Mulsanne straight and a 250 GTO was a ten-year-old racer.

My personal introduction to supercars was the 1970 24 Hours of Le Mans, when the 512 and the Porsche 917 were considered lethal weapons for use only by the most qualified drivers, yet in June 2005, at the Ferrari Challenge race at Mont Tremblant, the 360 Challenge cars lapped faster than well-driven 512Ms. That’s progress, but the 512M will always be ultra-desirable when 360 Challenge cars are just used cars.

Tastes in cars change just like in other forms of art. While the dinosaurs of my generation think of many of these supercars as “new,” everything is relative. In the view of some of today’s new age collectors, the F40 is just an underpowered 16-year-old car, and the 288 GTO is even more hopeless as it hits 22. All this is just proof that the bulge moves through the snake and life goes on, and excitement is where you personally find it.