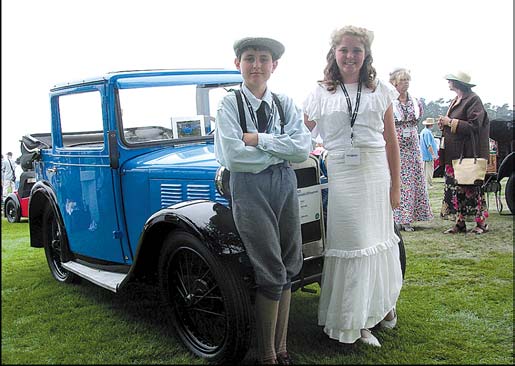 The 743-cc, 13-horsepower flathead-four engine on my children’s 1930 BMW DA-2 Kabriolet is far removed from the 3,432-cc, 310-horsepower double-overhead-cam-four engine of a 1956 Ferrari 860 Monza. And most likely, all four of the BMW’s cable-operated drum brakes, each the size of a teacup saucer, would fit handily within a single Grand-Prix-bred brake drum of the Monza that RM sold for over $2 million.

Be that as it may, I must confess that, for the first time, Ferraris weren’t the first things on my mind during the Monterey weekend. I entered my kids’ BMW into the Pebble Beach Concours and served as their all-in-one driver, mechanic and detailer for a glorious three days.

Mick and Colleen, my 11-year-old twins, enjoyed the 50-mile, uphill and downhill Pebble Beach tour; they were constantly turning around in their seats, amazed at how both the ancient Bentleys and Rolls, as well as the modern Suburbans and Durangos, towered above them. I drove the car flat-out the whole way, which meant, of course, that moms pushing strollers would leave me in their dust when the stoplights turned green.

On Sunday, Colleen, with Mick as her riding mechanic, drove the BMW across the ramp and onto the podium at Pebble, where they collected their third-in-class prize at the concours. I know it’s a dad thing, but I must say that watching the two of them, in the little classic, brought me more personal pleasure than anything I had done in my previous 29 years attending the events of the Monterey weekend.

Of course, I couldn’t help but make the rounds of the auctions while I was there. That’s a “car-guy” thing, and I’m sure you understand. There were plenty of Ferraris offered during the weekend and, for the most part, they all achieved market prices. While Bonhams & Butterfields’ August 15 Quail Lodge auction offered a handful of Ferraris, only two sold. The 250 Pininfarina Series II cabriolet, S/N 311—which needed everything—sold at $135,000, which seemed high to me given its condition, and the 275 GTS, S/N 7337—which was just a nice old used car—sold at $157,500, fair enough.

While that is a hell of a lot of money in anyone’s book, the 860 Monza is a hell of a lot of car, being one of three built. As a factory team car, it won the 1956 Sebring 12-;hours race, driven by Fangio and Castelotti, then was sold to Von Neumann and campaigned extensively by Phil Hill in the US. Important enough to be featured in the May 1996 issue of Road & Track magazine, 0604 has always commanded a premium price and was last publicly offered in Switzerland in 1999 at $1,800,000. Add in that the new owner is a Dutch antique dealer, who is buying in dollars but paying in Euros, gaining an immediate 10% discount. This is a new world-record price for a four-cylinder Ferrari, but I would have to call this price market correct, and I predict this car will see considerable appreciation during the next five years. It’s just too cheap compared to the minimum $6,000,000 or so that a 12-cylinder 250 TR will set you back. (For an in-depth analysis of this car, see Thor Thorson’s profile that begins on page 54.)

Of course, the weekend ended with Christie’s, where three Ferraris sold. 330 GTC S/N 11517, in nicely restored condition, brought $156,000, all the money for a non-trophy-winning GTC. A 246 GTS, S/N 5480, brought $105,750, which, for this car, was full retail and them some. Of course, enthusiasts of means don’t come to Monterey looking for a bargain, and when they see a bauble they like, they just snap it up. I didn’t see many marked-up SCM Price Guides in the lounges of the Gulfstream GIVs, Dassault Falcon 2000s and Boeing 737 business jets parked at the Monterey jet center, and I doubt that the new owner of the Dino cares what I think about what he paid. And more power to him.

Overall, the lessons offered by this weekend were the same ones we’ve been seeing the past few years. The market for production GT Ferraris such as a quality 250 PF cabriolet, 330 GTC or 246 continues to rise. Cars with questions will not bring anywhere near the silly prices the same cars brought in the late 1980s, simply because the buyers are far more sophisticated end users, not speculators.

This weekend, it wasn’t a Ferrari that elicited the “where-did-that-bid-come-from” prize of the weekend. That went to the 2005 Ford GT sold by Christie’s, bought by former Microsoft President Jon Shirley, for three times the projected MSRP, a staggering $557,500. But you know what? The proceeds of the sale above the reserve went to charity, and I don’t think Mr. Shirley is particularly worried about his financial position being affected if his GT doesn’t hold 100% of its value over the next decade.