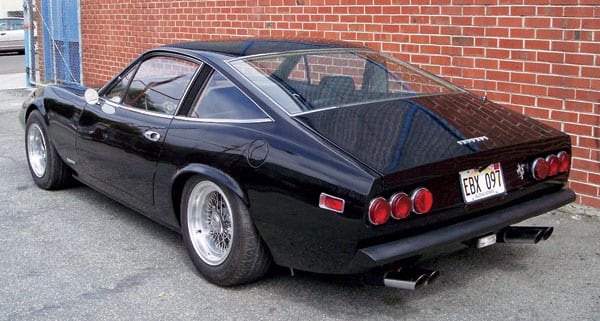 In November 2005, I wrote a column entitled “The Punch of Deferred C/4 Maintenance… And How I Leaned Into It,” regarding a 365 GTC/4, s/n 14965, that we had sold to Hawaii and bought back 21 years later. This C/4 was a poster child for deferred maintenance, and we paid the price when the repair estimate climbed from an expected $8,000 to a painful invoice of $16,781.85. Unfortunately, this story now advances to an all-new and truly egregious stage.

Short attention spans
The story begins in late 1984, when the shop I then owned, European Auto Restorations, located and did a pre-purchase inspection on 365 GTC/4 s/n 14965 for a Los Angeles-based client. We sold the car to that client (Client #1). No pre-existing problems were noted during the inspection.

After driving 1,518.5 miles, Client #1 tired of the car, and in May 1985 we bought the C/4 back and sold it to Client #2 in San Francisco. Prior to shipment to Client #2, our shop installed a new clutch and overhauled the gearbox. Nothing unusual was noted during the work. While in San Francisco, the C/4 was serviced by a respected local shop. Like any shop anywhere, that shop would cheerfully sell any additional needed work, but found no pre-existing problems that deserved mention.

A long vacation in Hawaii
Client #2 also had a short attention span, and in late 1985 we bought the C/4 back and sold it to Client #3 in Hawaii, who had the car from 1985 until 2005, driving it 4,563 miles. At that point, we bought it back, in partnership with Fantasy Junction. As already mentioned, we had the car serviced in Hawaii. Had the Hawaiian shop seen any other work they felt was needed, it would have been mentioned.

Back to San Francisco
In 2006, the C/4 was shipped to Fantasy Junction and sold “as-is, where-is” for $65,000 to Client #1, who wanted it back for nostalgic reasons. The Ferrari world is small, and so Client #1 had a pre-purchase done by the same San Francisco shop that had serviced the car in 1985, some 24 years earlier. The pre-purchase inspection was $300 and included a compression test, which showed excellent compression, most likely as a result of the car being test-driven by the mechanic in Hawaii, and putting it through several short heat cycles. A leakdown test was not done, as any rings that might be sticking would probably be freed up by further usage and heat cycles.

Once the car was re-purchased, Client #1 had the San Francisco shop rebuild the front and rear suspension at $5,190.53, (of which this author and Fantasy Junction paid $1,554). The C/4 next went to a paint shop for a high quality paint job, which took three years to accomplish. Once painted, the C/4 was back to the San Francisco shop for a largely cosmetic engine-, transmission-, and differential-out service, with white ignition wires, powder coating, a rebuild of the heating/cooling system, etc., for a total of $18,956.91.

When the engine was out and cleaned, the San Francisco shop noticed that the block had a patch, about one inch in diameter, on the upper right front oil pan casting. This indicated that some time prior to our records in 1984, and three owners and many thousands of miles earlier, it had probably thrown a rod. The San Francisco shop didn’t mention this to Client #1, as damage from decades ago that didn’t need attention or affect anything didn’t seem relevant.

Creating work for shops and lawyers
The C/4 then went back to the paint shop and later on to an L.A. shop that did yet another inspection and found that while the compression was within limits, the leakdown was high. While it would not be unusual for a shop to suggest that the owner put a few hundred miles on the car, which usually frees the rings and cures the problem, in this case Client #1 gave his okay for a rebuild. Once the LA shop had the engine out they found the one-inch patch, and the finger-pointing began. Client #1 now claimed that he would never have bought the car had he known it had chucked a rod some time prior to 1984 (although he had owned it and driven it previously without problems, just as Clients #2 and #3 had).

A well known professional expert was called in for an inspection and valuation, and I was quite surprised at his estimate of $45,000 for the alleged diminution in value. After all, the patch had been on the block for decades, before the current owner had first owned the car in 1984–85, and a $45,000 claim on a $65,000 purchase price was, in my opinion, absurd.

Enter the lawyers
If the expert’s estimate of $45,000 for alleged diminution in value was ludicrous, the Southern California law firm now involved jumped on this bandwagon with both feet. Their demand letter was mind numbing, demanding a refund of $86,000 (for a $65,000 car), another $51,000 in repair costs, $25,000 for an interior that was not yet done, and $20,000 in parts, for a simply stupid total demand of $182,000 on a car that might be worth $100,000 if it were completely restored—on a good day. And all of this over a one-inch patch on a block that had gone unnoticed for decades.

Back to the real world
When I first heard of this lawsuit, I called the shop in San Francisco and offered to mediate the madness for free.

I spoke with Bruce Trenery of Fantasy Junction, my partner in the car, who summarized the situation well by saying, “I don’t think we would be having this conversation if prices were still going up.” He added that “we spent $16,781.85 to make sure the car was right. If the (Hawaiian) mechanic had thought there was a problem, he would have recommended the necessary repair. It would seem that the fact that the car had thrown a rod decades ago, had been repaired, and had multiple owners over tens of thousands of miles since, proved the pre-1984 repairs were done correctly.”

Next call was to Dennis Birkhimer, the San Francisco shop’s lawyer, who said, “This is America, anyone can file a lawsuit, they all want their day in court, but it’s very expensive to get there.” According to Birkhimer, the question was: “Is there an industry standard on what should, and should not, be done in a pre-purchase inspection, and did the San Francisco shop meet the industry standards of care.”

Next was lunch with Dave Swanson, a criminal lawyer, and Ferrari owner, who was stunned by the amount of the demand letter. He summarized by saying that, in his opinion, the real goal of the plaintiffs’ lawyers is to find out if there is insurance coverage somewhere in this chain, and if there is, make claims that are so outrageous that the insurance company will settle rather than pay the cost of endless litigation, regardless of the merits or validity of the claim. The cost of litigation will easily run some number well north of $75k per side, so the goal is to extort the insurance company to settle for some number south of that.

It’s not over
This situation could drag on for months, if not years, sucking money and energy from all but the lawyers, in yet another variation of the diminution-in-value bandwagon. What once would have been an outrageous and laughable lawsuit somehow seems normal simply because this is the new norm in the ever-expanding game of our “It’s not my fault—who can I find to blame?” legal world.

My goal was to head this off at the pass, before it got expensive for both sides… as the only winners will be the attorneys. A future column will have to wrestle with just exactly what the norm should be in a pre-purchase inspection, and just how much liability should a shop rationally be expected to take on for a $300–$500 inspection on a 35-year-old car. By the way, virtually no authorized Ferrari dealers will perform pre-purchase inspections any longer. Blame the lawyers.