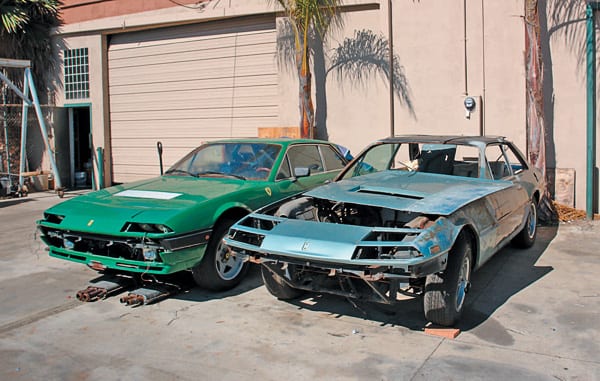 A subscriber recently wrote, worrying about future maintenance costs of late model Ferraris: “My only fear is the outdated computer-controlled systems and the way obsolescence will drive maintenance sky-high for such systems. At least the vintage V12s don’t suffer ECU and “black box” syndrome!” While computer systems will certainly be problematic, our subscriber had merely opened Pandora’s box to the long list of potential problems the future will bring to all late-model exotic-car owners.

Computer problems loom
Modern Ferraris have Bosch engine management and ABS computers with TRW-built airbags, all cross-managing a hoard of Digitek computers and ECUs that talk to the Bosch computers while controlling a/c, heat, door locks, windows, power tops, dash modules, seat controls, ad infinitum. These secondary Digitek systems are Ferrari-only items. One only needs to go to the Digitek web site to see these components are described as “highly customized electronic products,” an ominous harbinger of future problems. While all manufacturers are required by Federal law to supply replacement parts for ten years after production ends, when those ten years are up, look out. Long lists of computer and electrical components, injection-molded rubber, and plastic body trim parts will all become unobtainable.

Ferrari slips through EPA cracks
On the emissions front, a 1996 Federal EPA law (sponsored by Al Gore) requires every auto manufacturer to supply any and all engine and emission system diagnostic tools “at a reasonable cost” to any independent shops. All modern cars have on-board diagnostic systems that, in theory, allow virtually any mechanical or electrical problem to be analyzed by a hand-held plug-in computer that can read every system in the car. Need a plug-in computer for any GM or Japanese car? Easy to buy from the dealer or multitudes of independents, such as Snap-On Tools. The price? Starting at $250 and heading up to $5,000 for the best.

Need a diagnostic computer (called an SD3 box) for your Ferrari? Ferrari will sell you one for a mere $22,000, with free software updates provided for the next six months, but it is a “read-only” model and will not allow any reprogramming (i.e. repairs). Needless to say, the “in-house” unit used in authorized Ferrari dealers will allow these repairs. Want to use a non-Ferrari diagnostic computer? Sorry, Ferrari uses non-standard codes that don’t translate to standard OBD2 boxes.

Older Ferrari parts interchange
The older Ferraris, from the 512 BB backwards, can be restored by an experienced shop, and virtually any part is or will continue to be available or can be made. Even older Ferraris such as the Lusso were evolutionary, in that interchangeable parts were used throughout the ten-year 250 series interchange, so the same basic parts fit many cars. Today, cars evolve so quickly that their systems are updated throughout the production run, meaning today’s new car has components and systems that won’t interchange with last year’s supposedly identical model.

The cost of any major repair on a 20-year-old Toyota or Chevy quickly exceeds the value of the car and so the cars become a throw-away, while a 20-year-old Ferrari will always be a Ferrari, with the implied prestige and exclusivity of ownership that ensures their long-term value and collectibility.

As for the future of mechanical repairs, and to again make the Lusso versus 355 comparison, a Lusso has 24 valves that cost $177 each, while a 355 has 40 valves that cost $179 each. If you need a Lusso flywheel, it’s $1,500 for a high-quality reproduction versus $4,100 for the higher tech 355 unit. How about hydraulic lifters? They are $30 each for a 355 and there are 40 of them, while the Lusso has none. Labor-wise, a Lusso requires about four hours to remove the engine, while a 355 needs approximately eight hours. The Lusso needs a day to reinstall the engine, the 355 consumes two days

Simply put, modern Ferraris are more expensive to fix and have many more parts, most of which are more expensive, than the older cars. Before you complain about parts prices, be happy you can find them at all. Imagine explaining to your date that your 348 air conditioning will never work because the control module is bad and they are no longer available!

Gearheads evolving into nerds
In the long distant past, Ferrari owners were either very rich or gearheads who had grown up converting 1955 Chevys to a four-on-the-floor, swapping gear ratios and installing Duntov 30-30 cams. Decades ago, working on one’s Ferrari, Maserati, or Jag was a rite-of-passage for gearheads and wannabe engineers. Since the advent of the 308, 30 long years ago, Ferraris have simply worked better, and in the 1980s, a cadre of independent shops sprang up looking after service issues for a new group of buyers who expected to use their Ferraris everyday. In the future, yesterday’s gearheads will be replaced by computer nerds who can disassemble and reverse-engineer a no-longe-available computer, ECU, or entire operating system.

Years ago, a rusty and derelict 250 2+2 or 250 PF would provide parts to restore more valuable 250 models. Today, these 250 2+2s and 250 PF coupes are far rarer, and are themselves restored. On the newer cars, optional sub-woofer high-power stereo systems, electric seats, alarm systems, and extraordinarily complex convertible tops all add to potential problems, but it’s not planned obsolescence, it’s unavoidable obsolescence.

There’s no way a machine as complicated as a new Ferrari can be built to last like vintage Ferraris. Exotic components are too sophisticated for shop repair or aftermarket reproduction. Current OEM suppliers will go out of business, be bought out, or simply not be interested in making more units. Certain parts necessary to make contemporary Ferraris run will eventually dry up and otherwise good Ferraris will become transplant patients, sidelined and waiting for somebody else’s accident.

Today, several shops such as Ferrari Service of Costa Mesa, California, part out accident—or fire-damaged 400s, 348s, 355s, 360s, 456s, and 550s, which will supply trim and electrical parts to support problematic brethren. And shops like F.A.I., also in Costa Mesa, now reverse-engineer and rebuild systems no longer available. As a quick example, F.A.I. will rebuild the electronic dash from an F50 for $2,500 in only a few weeks. Take your F50 to your dealer and the dash goes off to Italy for six-plus months, returning with a $10,000-plus repair bill.

As for new old stock parts, T. Rutlands in Tucker, Georgia, has agreements with many of Ferrari’s original equipment manufacturers, which will continue to supply some of the more common parts, once their current contracts with Ferrari expire.

Not for the faint of wallet
As for factory support, in the past every manufacturer has immediately ignored cars as soon as the federally-mandated support period is over—they want you to buy a new one, not fix an old one—so consumer complaints about assistance are ignored. The factory has often answered the question: “What is the best/favorite/most exciting Ferrari?” with “The next one.” However, with the opening of Ferrari Classiche, perhaps more parts will be available for those who prefer to take their cars back to the factory for restoration, as they will come with a factory warranty and certificate of authentication. The price will be high, but after all, somebody has to help pay for the F1 budget.

In the future, rebuilding or restoring a 20-year-old 355, 456, or 550 Ferrari will require lots of expensive parts, tight machining tolerances, expensive skilled labor, and major parts sourcing, a feat for the die-hard Ferrari fan who is not faint of wallet.

These cars are now more or less fully depreciated, so further price drops will reflect high-mileage or deferred maintenance issues. As always with Ferrari ownership, the combination of style, exclusivity, and speed costs money. But if you want to feel better about that 456 in the garage, ask your friend what it costs him to update the avionics on his Lear 65.