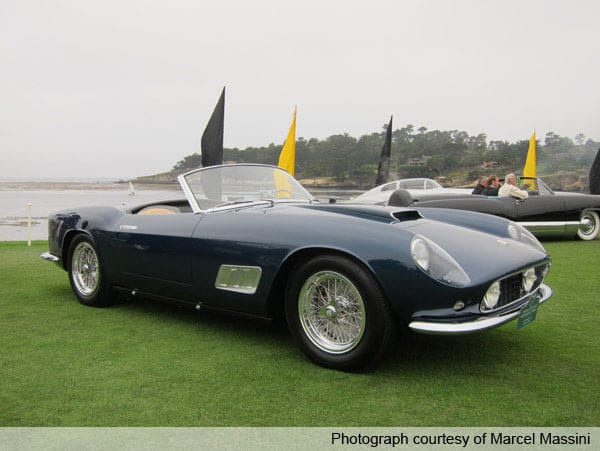 Every two or three years I revisit the world’s economies as they have been, at best, volatile, with major changes in direction coming every few years, all of which affect today and tomorrow’s Ferrari markets. Booms and bust repeat for reasons that are unfortunately only all-too-clear in the rear-view mirror of life. As aspiring Ferrari-socio-economists we have to look at the past to forecast the future, as we all-too-often seem to be doomed to repeat the past’s mistakes. We begin with the first Ferrari boom and bust cycle, long since forgotten by those not in their late 50s or older.

We begin with a history lesson
Unlike Europe and Japan the US was undamaged by WWII and enjoyed an unprecedented twenty-year post-war industrial boom. The party ended in the early 1970s for many reasons. President Johnson’s Great Society program of public education and urban redevelopment had led to rampant inflation. The US was facing stiffer competition from revitalized export-orientated economies such as Japan and Germany as well as newly industrializing Korea and Taiwan. Holders of the U.S. dollar were losing faith in the U.S. government’s ability to cut its budget and trade deficits. Then-President Richard Nixon unilaterally cancelled the Bretton Woods agreement linking the US dollar to the gold standard which kicked off even more rapid inflation. The U.S. was running a balance-of-payments deficit and a trade deficit. Add in the high cost of paying for the Vietnam war, high unemployment, a rapidly falling dollar and a major stock market “correction” in early 1973, much of which we can relate to today!

The ever looming Black Swans
A Black Swan is an economic metaphor for random, unpredictable economic events that prove to be major economic market shakers and usually only seem obvious with the benefit of hindsight. The Black Swan came in October 1973 when OPEC cut off the oil supply driving gas prices from 33 cents to $1 a gallon in only a few months. The economy tanked and exotic cars went from being desirable to dumb. Near-new Daytonas, Dinos and Miuras cluttered Southern California used car lots with Daytonas priced at $15k and Dinos at half that. 250 SWBs and California Spyders were a mere $5,000.

Ferraris boom, bust-and boom again
Booms and busts tend to follow three to five year up or down cycles and all bust cycles eventually end. Consumers painfully accepted $1-per-gallon gas and in early 1975 the Fed cut interest rates. From 1975 to 1979, the financial markets, the economy and real estate boomed and inflation soared. The Ferrari market had its first boom, and in only five years, from 1975 to 1979, the $15k Daytona became a $75k Daytona, a 400% run-up over five years. Inflation peaked at 13.5%, although Ferrari prices far exceeded the inflation rate.

In 1979 the US suffered through the second gas crisis and long gas lines. In August 1979, party-crasher Paul Volker became the Fed Chairman. Volker cranked interest rates to 21 percent, which killed inflation, the economy, the real estate market and the Ferrari market. By 1984, Daytonas were back to $50k and almost sale-proof. As interest rates dropped in the early 1980s, the money markets stabilized, liquidity returned, baby boomers began celebrating their big “Four-O” birthday with a buying binge and the economy again took off. When the Japanese came to the party in 1986, Ferrari prices spiraled onward and upward. By the end of 1989, a nice Daytona had reached $500,000, a 900% run-up over five years!

Different decade, different boom, same reasons
Once again the 1985-89 boom was built on voodoo economics and readily available leverage. The Bank of Japan’s interest rates were at a (then) ridiculously low 2 to 3 percent and massive liquidity flooded the Japanese market. The Japanese banks were offering an unbelievable 100 percent-plus financing against the appraised value of real estate! As the yen doubled from about 300 to the dollar in 1985 to about 150 to the dollar by 1989 anything outside Japan was half-price.

Back in the United States, on what is now known as Black Monday, October 19, 1987, the Dow Jones Industrial Average started down and by the end of October had lost almost 23% of its value, following the lead of Hong Kong, which fell 45%, Australia fell 41%, the U.K. fell 26%, and Canada fell 22%.

While most would guess the Ferrari market would be hard hit by the drop in the Dow, investors pulled money from the stock market into collectibles, such as art, real estate and autos. The Ferrari market kept on climbing through 1988 to the very end of 1989.

Japan defies financial gravity, but all parties end
As other stock markets headed south during the late 1980s, the Japanese Nikkei index kept climbing through 1988 and 1989, reaching a peak of 38,915.87 on December 29, 1989. While American and European buyers had started to pull back from the Ferrari market in 1988, the Japanese were very aggressive buyers and kept redefining the market upwards. At about this time the front page of The Economist read “The Emperor Has No Clothes”, referring to the Japanese market. There should have been no surprise when the Nikkei index crashed in December of 1989, coupled with the following implosion of the Japanese real estate market. Japan’s boom became a bust. By 1994, our benchmark $500,000 Daytona was now a $125k car and again almost sale-proof!

By 1995 the Ferrari market had begun a slow but steady climb, but stopped again in 2000, when the Dot Com Bubble burst and NASDAQ markets imploded. On September 11, 2001 another Black Swan hit the markets when nineteen al-Qaeda terrorists hijacked four passenger jets. Ferrari prices again went on hold. In 2004, in an effort to revive the economy Fed Fund chairman Alan Greenspan slashed the Federal Funds rate to 1%, which encouraged Congress to run up huge deficits. The real estate markets again boomed while the financial markets slowly gained strength through the early 2000s, and by late 2007-2008, our benchmark Daytona had crossed well over the $300k barrier. Ferrari prices peaked at Monterey in August 2008.

The latest bust and boom
The light switch went to the “off” position only thirty days later in Sept. 2008 with yet another Black Swan, the sudden demise of Lehman Brothers and the freeze of the financial markets. The world entered the worst financial down turn since the Great Depression of 1929. If one had to sell, our benchmark Daytona was a low $200k car but virtually sale-proof.

A slow recovery began in very late 2009, and in August 2010, the Monterey auctions paid proof to a market revival with a whopping $172m in sales, up by $52m from 2009. These impressive results were reinforced at Scottsdale in 2011 with a very impressive $159m in sales. The boom was back, and by late 2011 excellent Daytonas were now back over the $300k mark.

Scottsdale and beyond
We’ve just returned from the 2013 Scottsdale auctions and Ferrari prices have been redefined further upwards. An example of the rapid recent climb that I’m very familiar with is 1959 covered headlight California Spyder s/n 1073, which had been owned by collector and enthusiast F.P. “Budd” Spratlen, III of Denver, Colorado. Spratlen had willed s/n 1073 to the University of Colorado, Denver and in February of 2011 we were the under-bidder at $2.35m. It sold to the most recent Denver-area based owner for $2.45m, who then had s/n 1073 beautifully restored and shown at Pebble Beach in 2012, a prudent move to establish the high level of restoration. 250 LWB California Spyder s/n 1073 most recently sold on 18 Jan., 2013 at Gooding’s in Scottsdale for $8.25m “all done”, a staggering $6m run-up in price in just under two years.

Further down the food chain multiple other Enzo-era Ferraris enjoyed all new levels of sales prices at Scottsdale with 246 GTS s/n 6462 selling for a staggering $506k, 246 GT s/n 3392 selling for $291k and 330 GTC s/n 8915 selling for a take-your-breath away $737k. Needless to say these prices could only be achieved at the right auction, on the right day, with the right combination of over-eager bidders and are not attainable in the real world of exotic car dealers and brokers. What happens next at Monterey this August? A $600k Dino? A $900k GTC? A $10m LWB California? Possibly, but after only two years the current boom is becoming a bit “frothy”.

What could possibly go wrong?
The good news is that the Euro-zone hasn’t imploded, Greece hasn’t left the Euro and the Irish are proving that austerity and an export-driven workforce [that actually pays their taxes] can turn the economy around. Japan somehow continues to muddle through and in the US real estate is staging a comeback, yet another opportunity for hedge funds and leverage. Additionally the trillion dollar wars in the middle-east are being wound down and un-employment in the US is slowly improving.

The bad news is that Mario Draghi, head of the European Central Bank, has become Mr. “Whatever it takes” and has vowed to print Euros to end the Euro-zone’s recession. Obama stated in the recent closed-door budget meetings that the US “Doesn’t have a spending problem” and Shinzo Abe, the new Prime Minister of Japan, has ordered the Bank of Japan to fire up the printing presses. These three leaders advocate that targeting a healthy level of inflation will energize exports, revive production, spur profit, expand employment, raise wages and drive up tax revenue in a virtuous cycle of growth. The doomsayers warn that officials are ignoring risks of governmental insolvency, bond market sell-offs and runaway inflation. Only time will tell, although as this column outlines, we’ve been to that party before and long-term it rarely ends well.

Kicking the can endlessly down the road
Politicians have proven amazingly astute at kicking the socio-economic cans down the road and there are no Black Swans on the horizon, but then there never are, they come from nowhere and never at a good time.

The Ferraris of the early-Enzo-era long ago defined the collector cars standard for both race and GT cars. That means the most exclusive—and the most-collectible, best-appreciating Ferraris have always been, and will always be, the early-Enzo-era cars. They have certainly been a better investment in your garage than Lehman Brothers stock certificates or a strip mall in Florida, Nevada or Arizona. Only the Supercars, the 288 GTO and the F40 of the Fiat-era and the F50 and Enzo of the Montezemolo-era have proven to be collectable.

It’s a simple equation: more wealth chasing a fixed number of Supercars and Enzo-era cars. However, let me end on a cautionary note. Despite all of the good things I’ve noted above, timing is everything, Black Swans can render the best laid plans worthless and cars built in series of 20-40 will always be worth more than those built in a series of 1,200. Just remember, had you bought a Daytona at the height of the market 23 years ago, the car has represented dead money since then, not to mention storage, repairs insurance, etc.. Like many American homeowners, a 1989 Daytona purchaser is underwater.